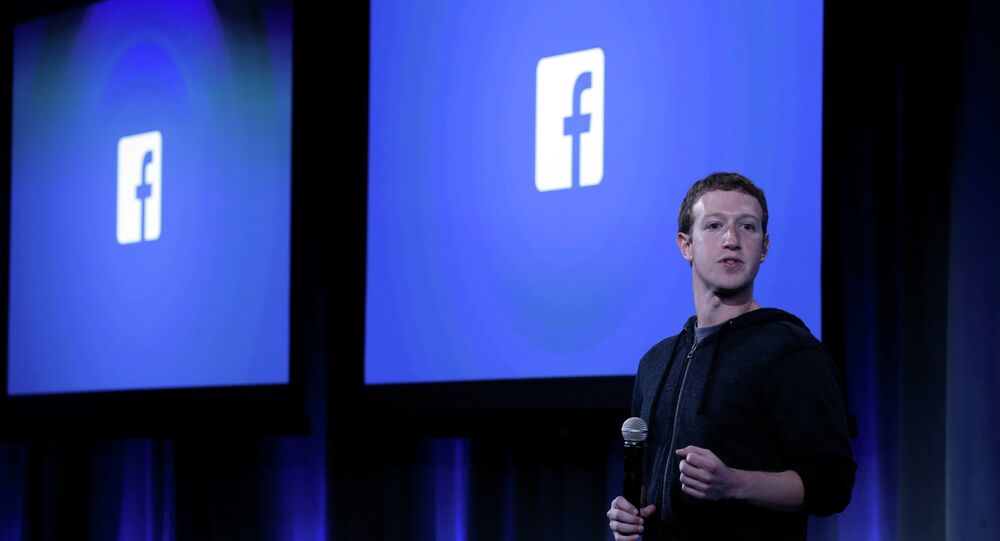 The testimony of Facebook CEO Mark Zuckerberg before the European Parliament was insufficient, as the social network founder was able to avoid uncomfortable questions, several members of the parliament pointed out.

Zuckerberg's hour-long interview took place on Tuesday. The format of the hearing allowed the Facebook CEO only several minutes at the end of the session to answer questions. However, he promised to provide written answers to all inquiries.

"Today's pre-cooked format was inappropriate & ensured #Zuckerberg could avoid our questions. I trust that written answers from Facebook will be forthcoming. If these are not accurately answered in detail, the EU competition authorities must be activated & legislation sharpened," Guy Verhofstadt, the president of the Alliance of Liberals and Democrats for Europe (ALDE), wrote on his Twitter.

© AFP 2021 / CHANDAN KHANNA
Zuckerberg to EU Parliament: In 2016 We Were Too Slow to Identify Russian Meddling (WATCH LIVE)
Brexit coordinator Verhofstadt has expressed his concern over Facebook's attempt to clamp down on the spread of fake news over the social network by tasking the company's employees with weeding out false stories.

"This brave new world of Mr #Zuckerberg in which tens of thousands of #Facebook employees decide what is fake news and what is not, scares me. This is a public task for the public authorities," Verhofstadt wrote.

Syed Kamall, co-chair of European Conservatives and Reformists (ECR), said the hearing only emphasized the lack of knowledge about "the depths that people's data has been abused."

"Whilst this was another important step in drawing attention to this very serious situation, unfortunately the format was a get out of jail free card and gave Mr. Zuckerberg too much room to avoid the difficult questions. When Facebook’s technical team visit the civil liberties committee it should be organised in such a way to make sure they actually have to directly tackle all our questions, however difficult," Kamall said, according to the group's press release.

The ECR Group co-chair said he was surprised with Zuckerberg's confirmation that the social network collected the data of non-Facebook users "for security purposes."

The members of the European parliament had the right questions, but the format allowed Zuckerberg to avoid answering them, Sven Giegold, a member of the Group of the Greens/European Free Alliance, said.

"The US Congress had the right #hearing format, but asked #Zuckerberg only soft questions. The EU Parliament had the right questions, but a soft format that allowed #Zuckerberg to avoid the answers. Democracy can do better! Now it's time to regulate #Facebook!" Giegold said on his Twitter.

Mark Zuckerberg's testimony was a "missed opportunity," as the US entrepreneur was able to sidestep difficult questions, chairman of the UK Parliament's Digital, Culture, Media and Sport (DCMS) Committee said on Tuesday.

"Today's session in the EP [European Parliament] was a missed opportunity. An hour of questions, followed by a lengthy statement from Zuckerberg, with all difficult questions dodged. The format, which was agreed by Facebook, led to no real scrutiny," Damian Collins wrote on his Twitter.

Collins also stressed that Zuckerberg should appear before the UK parliament.

© REUTERS / Henry Nicholls
Cambridge Analytica Researcher Kogan Calls Facebook Data Mining ‘Pretty Usual’
On Monday, ahead of the Facebook CEO's visit to Brussels, Collins said the committee had shared a list of their questions for the social network founder with the European Parliament.

UK lawmakers are looking into the access of third parties to Facebook users' data. In April, the DCMS committee heard the testimony of Facebook's Chief Technology Officer Mike Schroepfer, but the lawmakers remained unsatisfied.

Facebook has faced widespread outrage as it emerged earlier this year that a political consultancy firm Cambridge Analytica had obtained a large amount of social network users' data harvested by a third-party application. The information was allegedly used to help target political advertising.