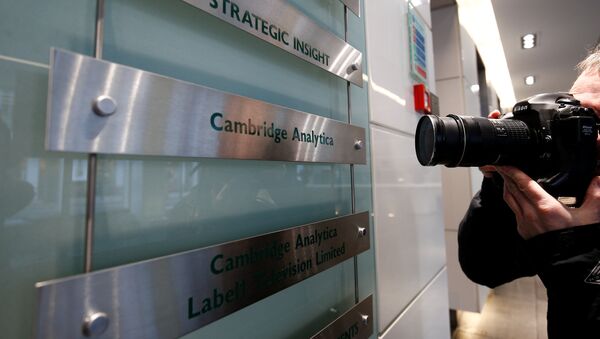 © REUTERS / Henry Nicholls
Subscribe
International
India
Africa
MOSCOW (Sputnik) - Alexander Kogan, the academic who was hired by Cambridge Analytica to collect information from tens of millions of Facebook profiles, has described the social network's data harvesting as usual practice, dismissing the narrative that the case with his app was something out of the ordinary.

"The idea that we stole the data, I think, is technically incorrect. I mean, they created these great tools for developers to collect the data. And they made it very easy. I mean, this was not a hack. This was, ‘Here's the door. It's open. We're giving away the groceries. Please collect them’ … I think there's utility to trying to tell the narrative that this is a special case that I was a rogue app, and this was really unusual. Because if the truth is told, and this is pretty usual and normal, it's a much bigger problem," Kogan said in an interview with the CBS News.

According to Kogan, he did not conceal anything from Facebook. His app’s terms of service stipulated users’ permission to disseminate, transfer or sell their data, though it was in breach with the social network's developer policy, the academic said.

Nix Chickens out of Select Committee Appearance Over Cambridge Analytica Case
Kogan is currently a defendant in a class action lawsuit filed in the United States against Facebook and the political consulting company on behalf of UK and US users.

In March, media reports emerged that personal information of about 50 million Facebook users had been harvested by the Cambridge Analytica consultancy firm without their permission through a special app called "thisisyourdigitallife," designed by Kogan. While working for major political campaigns, the firm gathered data to develop a mechanism that would predict and influence the behavior of US voters. Later, Facebook estimated the number of users affected at around 87 million, mostly located in the United States.

Since the news of misused data appeared, Facebook CEO Mark Zuckerberg apologized and promised to patch security vulnerabilities. The company has already tightened access for third-party apps and introduced a feature allowing users to remove such applications in bulk. Earlier in April, Zuckerberg testified before the US Congress over privacy concerns.