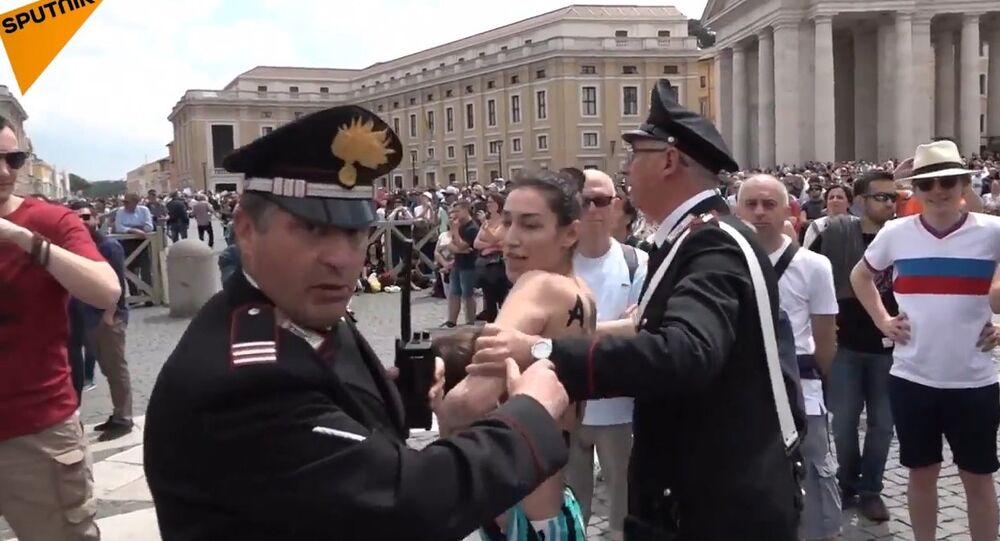 A video has appeared showing an activist of the self-proclaimed “sextremist” group, celebrating International Mother’s Day by appearing topless in Vatican City to make a point against the policy of the Catholic Church.

A topless FEMEN activist has been detained by the police after attempting to breastfeed a baby in Vatican City's Saint Peter’s Square. The woman with words "Alma Mater" written on her naked chest, which is Latin for “Mother Feeding,” has reportedly called on the Pope to acknowledge the right of women to breastfeed wherever they want with a special edict.


As a statement on the FEMEN website also reads, the public breastfeeding protest is to condemn the Catholic Church for its stance on abortion, the LGBT community and violence towards women.

The group claims that journalists, who covered the protest, were arrested by the police, while the majority of their footage was confiscated.

It’s not the first time that the “sextremists” have targeted the Catholic Church. Last December, a topless FEMEN activist attempted to snatch a baby Jesus statue from the Nativity scene in St. Peter’s Square. However, when she tried to grab the baby shouting “God is a woman,” the activist was also stopped by a gendarme and detained. A similar incident occurred in December 2014 when an activist managed to take the statue before being arrested.

FEMEN is a feminist group, founded in Ukraine, which sets “complete victory over the patriarchy” as one of its aims and has made its name through various kinds of protests worldwide, perpetrated predominantly by topless activists.