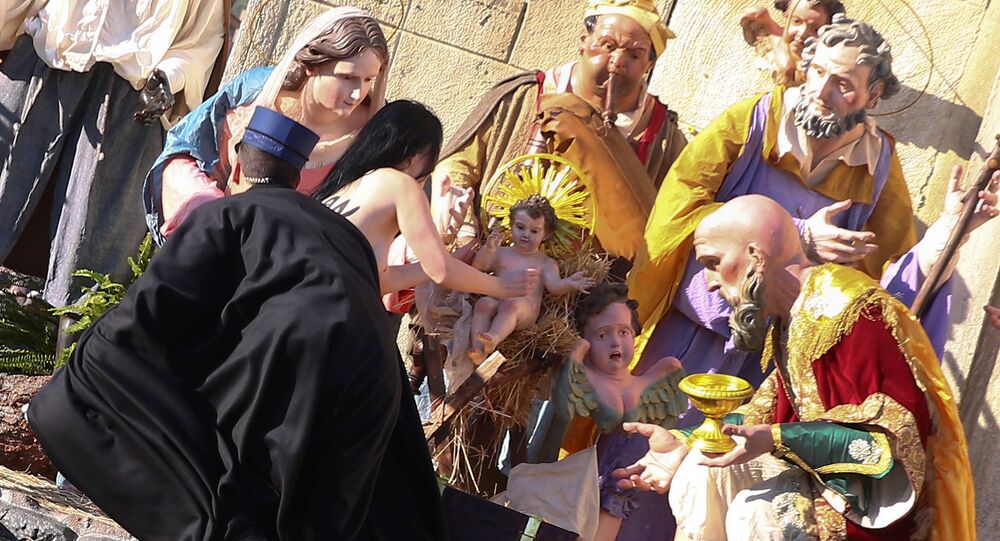 Women’s rights group’s activists have once again shocked the world with their dubious actions on Christmas Day.

Vatican Swiss guards stopped a topless FEMEN activist as she tried to kidnap Baby Jesus from the Nativity scene at St. Peter’s Square in Vatican City on Christmas. There was an inscription on the woman’s chest that read “God is woman!” The witnesses were astonished to see a woman running to the scene in a bid to steal the figurine right before Pope Francis delivered his annual Christmas homily to believers.

© REUTERS / Tony Gentile
A Vatican gendarme attempts to block a topless activist of women's rights group Femen, who tries to reach the Nativity scene in Saint Peter's square in the Vatican December 25, 2017

The protest dubbed “The Virgin Mary: Silence Breaker” was staged to oppose illegal abortion, homophobia and pedophilia: three FEMEN activists appeared as “modern, free Virgin Mary”, standing against centuries of “assault and oppression of women.” One of the “sextremists” has uncovered her story written on her breasts: “#metoo assaulted by church.”

FEMEN, a Paris-based radical feminist protest group, was founded in Ukraine in 2008. It has become widely popular due to the topless protests against pressing social issues, and the recent attack on Vatican is not the first one. In 2014 another topless activist managed to grab the baby Christ and went into a rant slamming the Catholic Church.