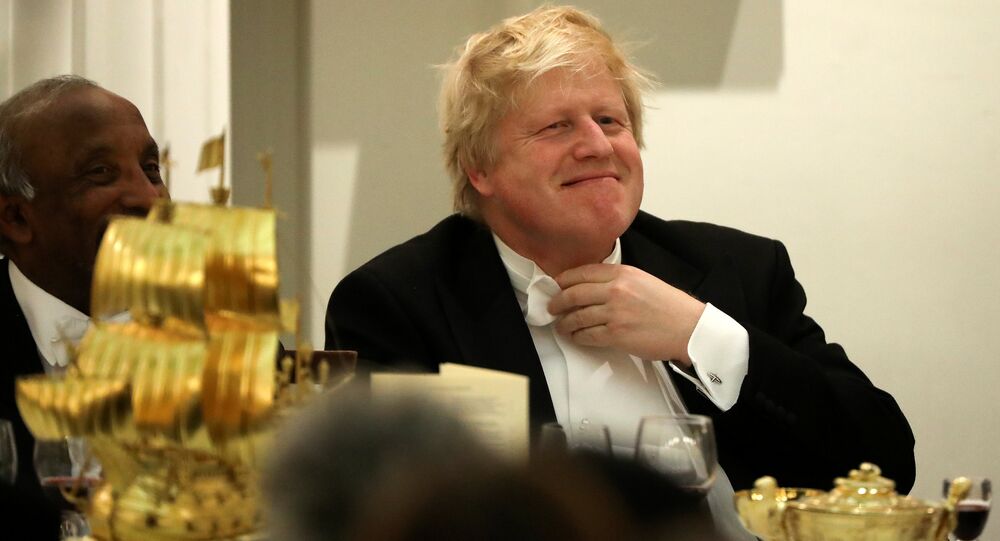 UK Foreign Secretary has now been called out by Russian officials, British politicians and thousands of social media users on his misleading claim on the origin of the Novichok nerve agent in Sergei Skripal's poisoning. Boris Johnson, however, doesn't seem to mind. The best defense is a good offense - seems to be his thinking.

The leader of the Labour Party has on March 4 reminded the British public in a televised interview that Boris Johnson has "claimed on German television that this was a Russian produced nerve agent, and Porton Down then examined it and said all they could identify was as Novichok, they couldn't say where it came from."

"The Foreign Office then issued a tweet in support of what the Foreign Secretary said, and then removed that yesterday after Porton Down had said they couldn't identify the source of it," Mr. Corbyn said.

The Russian embassy in the UK has questioned the motives behind Foreign Office's action, reproducing a screenshot of the deleted tweet.

Johnson's claims and the UK Foreign Office's actions have caused a massive row on social media, with users dismayed by how the UK PM Theresa May and her cabinet, especially Boris Johnson, dealt with the Skripal poisoning case. Hashtags #BorisMustGo and #TakeMayToo appeared on users' posts.

I don't think Jeremy Corbyn has to do anything, you've managed to discredit the UK all by yourself #BorisMustGo #takeMayWithYou

Boris has had last chance after last chance, but this time May must sack him.
On the #salisburyattack at best he was grossly incompetent rushing to judgement without evidence and inflaming tensions with Russia, at worst he deliberately lied and misled.
Either way #BorisMustGo pic.twitter.com/fngfR2imjT

What an embarrassment Boris Johnson is, yet the PM is too weak to sack him. https://t.co/1OL7nIpUf7

Instead of addressing his original misleading claim that pointed to the Russian president Vladimir Putin as the man behind the poisoning attack, Johnson decided to take it to Twitter to attack Jeremy Corbyn, accusing him of "playing Russia's game and trying to discredit the UK over Salisbury attack."

Johnson followed the tweet with two more posts, claiming "Russia has motive for targeting Sergei Skripal." No links to official reports or investigation were included in the tweets.

It is lamentable that Jeremy Corbyn is now playing Russia’s game and trying to discredit the UK over Salisbury attack.
Let’s remember the key facts:

1) Porton Down identified nerve agent as military grade Novichok; 2) Russia has investigated delivering nerve agents,likely for assassination,& as part of this programme has produced and stockpiled small quantities of Novichoks; 3) Russia has motive for targeting Sergei Skripal.

28 other countries have been so convinced by UK case they have expelled Russians. In contrast, Jeremy Corbyn chooses to side with the Russian spin machine.

If the British or — for that matter — international public expected the UK Foreign Secretary to provide some form of evidence to support his bold statements, they would most certainly be disappointed. Twitter commentators, however, couldn't keep calm following Johnson's most recent rant.

"Let's remember the key facts." A motto worth sticking on a post it note above the bathroom mirror perhaps… pic.twitter.com/wse2YM4XiS

1) You lied on camera and removed FO tweets of the claim that Porton Down had identified Russia as the origin on the agent.

2) Russia ARE NOT the only state known to have manufactured Novichok.

3) What is this Russian motive? There is none, just speculation by you.

Jeremy would rather wait for the investigation to finish and all the facts to come to light. Rather than jump to conclusions. Like the Iraq war. Remember than Boris? Where millions died?

I was thinking “danger” but both will do.

On March 4, Skripal and his daughter Yulia were found unconscious in the UK city of Salisbury. The United Kingdom believes the two were exposed to the A234 nerve agent, related to the Novichok-class nerve agents developed in the Soviet Union.