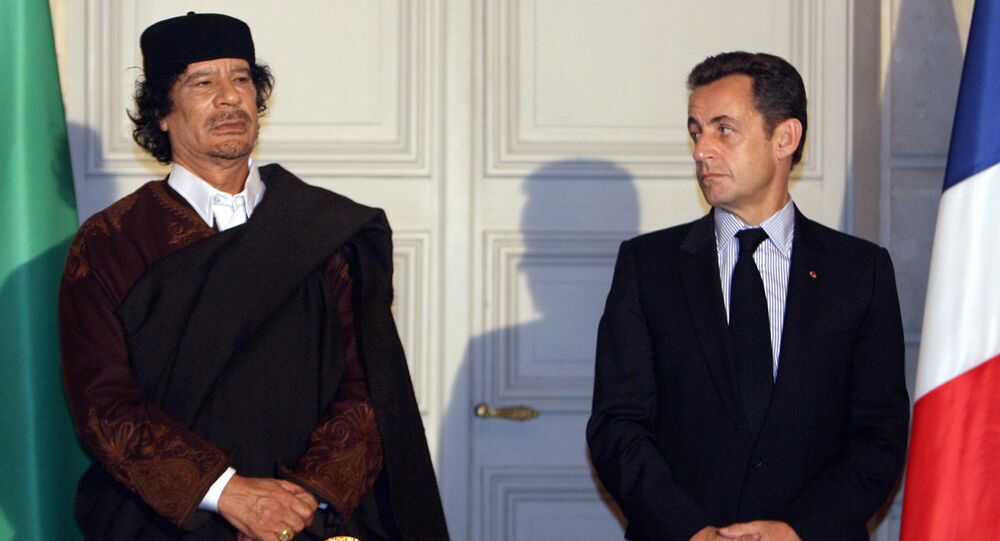 Former French President Nicolas Sarkozy has stated that accusations that his 2007 presidential campaign received funding from the Libyan government are not evidence-based, the newspaper Figaro reported. On March 20, he was detained for 48 hours over a presumed bribery case.

Political analyst and Libya expert Ali Shundub has told Sputnik that "the supporters of the late Muammar Gaddafi, all of his former military are happy to hear the news from France. Although Sarkozy flatly denies receiving funds from Libya, there are many proofs of the opposite."

Ali Shundub was the last journalist to meet and talk to Muammar Gaddafi.

"He told me that he led Nicolas Sarkozy into the Elysee Palace. Nicolas Sarkozy visited Colonel Gaddafi while he was the interior minister and asked to provide sponsorship for him to become the country’s president."

"Muammar Gaddafi backed Nicolas Sarkozy’s pre-election campaign, as he was striving for greater leverage on the world political arena. He wanted to be able to influence decision-making in the European Union. That was a strategic step for the future," the expert on Libya said.

It was earlier reported that Saif Al-Islam Gaddafi, son of the murdered Libyan leader Muammar Gaddafi, was ready to unveil proof of Nicolas Sarkozy’s campaign having been financed by a number of illegal Libyan funds, as well having been backed personally by Libya’s former leader.

Signs that Gaddafi assisted Sarkozy in assuming the French presidency emerged in 2011: back then, while NATO was bombing Libya, Saif al-Islam publicly demanded that Sarkozy "give the money back."  A year later, in 2012, the French independent online investigative magazine Mediapart published documents written in Arabic which reportedly bore a signature of Gaddafi's intelligence head Moussa Muhammad Koussa.

On March 19, Saif Al-Islam Gaddafi, who is said to be aiming to reconcile the embattled nation as well as rebuild the war-torn country, was nominated as a candidate for the Libyan presidency in the upcoming elections. He was released from jail under an amnesty half a year ago, having served his six-year term after NATO staged an uprising to oust his father in 2011. If Saif Gaddafi manages to successfully speak out against the French ex-president, it is expected to boost his chances of winning the 2018 presidential vote in his home country.