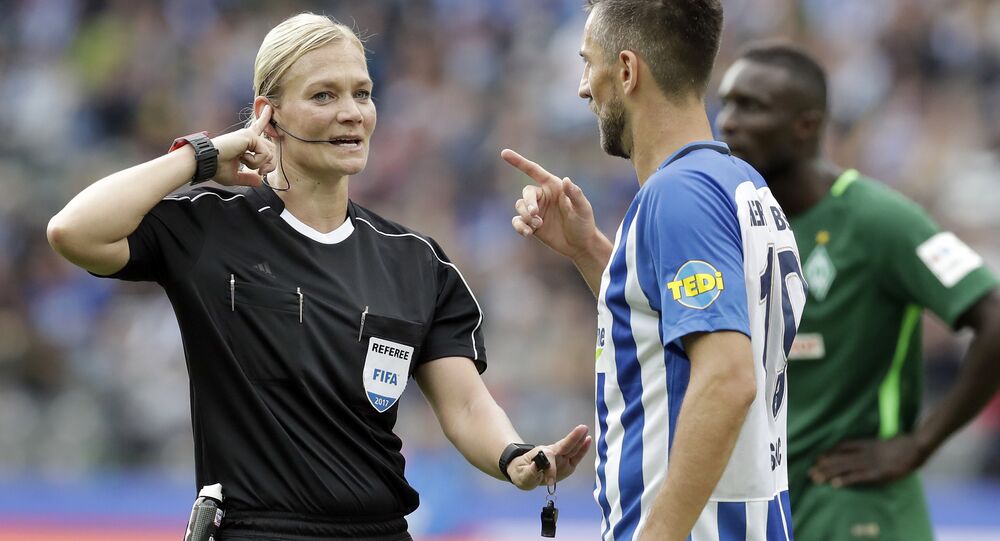 Until now, men simply haven't played ball with the idea of having the 'beautiful game' refereed by a woman. Bibiana Steinhaus has shattered that last bastion in world football by officiating in a top flight league game.

A policewoman by day, the 38-year-old took charge of the Bundesliga match between Hertha Berlin and Werder Bremen played in the Olympic Stadium on Sunday, September 10.

Immediately after the game, which finished 1-1, Steinhaus voiced her delight that it was all over and had passed without controversy.

"I'm relieved, to be honest, that it's successfully over and now we can look forward to the next one and start a normal life from tomorrow."

Not only did Steinhaus make history by becoming the first woman to referee in her homeland but also across Europe's five biggest leagues. Previously women have only ever acted as a linesman.

Stars from across world football paid tribute to Steinhaus' historic achievement, including Spain goalkeeper Iker Casillas, who tweeted: "All the luck in the world to Bibiana Steinhaus and the women who come after!"

To mark the landmark occasion, Hertha offered 500 Bibi-Steinhaus-tickets, only available to women, at half price.

In a statement, the club said: "We want to offer all women the chance to experience this historic moment."

"She has earned this through very good performances. I have great respect for what she has done, and it is great that she referees on Sunday," Werder Bremen boss Alexander Nouri told his club's website.

A true inspiration to all #WomeninFootball — Bibiana Steinhaus makes history on Sunday as she debuts as #Bundesliga's first female ref ⚽️🙌❤️ pic.twitter.com/quGdko6HzH

Steinhaus shrugged off the importance of her latest achievement, insisting her progress is only an issue in the media.

"For me and my referee colleagues, the fact that I am a woman hasn't been an issue for a long time. But we probably all need to accept and deal with the fact that it will continue to be considered a big deal in the media for now. I'm a Bundesliga referee because my performance have been good enough, not because I'm a woman," the referee told the Hertha Berlin website.

"If, because of that, I am considered a role model for young girls or a pioneer for equality, then that makes me even happier. I have a lot of experience now, which is an advantage in many situations. I have different ways of dealing with and reacting to certain situations in the game now.

Having failed to make her mark as a footballer, Steinhaus found officiating as a more successful means of continuing involvement with the sport. She began 10 years ago in her hometown in Harz, before steadily working her way through the system eventually taking charge of Bundesliga 2 games since 2011.

Steinhaus had a rough start, however, when in her first live television match, a player inadvertently patted her breast. She didn't let the incident phase her, and both she and the player laughed about it afterwards.

Two years ago, another footballer was handed a five week suspension by the German football authorities after having reportedly told Steinhaus that "women have no place in men's football" after she sent him off.

Kerem Demirbay later apologized for his remarks before refereeing a junior girls' game to make amends.

A Role Model for Girls

Steinhaus has plenty of support at home as her partner of former English Premier League referee Howard Webb who is full of praise for her achievements.

"She's done amazingly well, she is there on merit. And it goes to show that it doesn't matter if you're male or female, if you are good enough you will get to the top. She's a great role model for girls all over the world to show them exactly what can be achieved with hard work and dedication," he said.

Her most notable achievement before had been taking charge of the Women's Champions League final between Lyon and Paris Saint-Germain in June of this year.