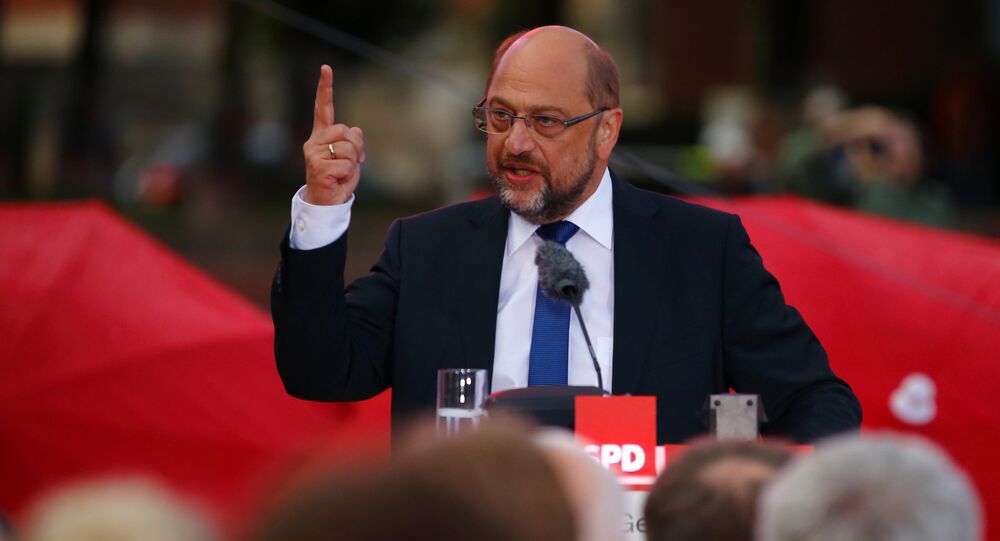 German opposition leader Martin Schulz has attacked US President Donald Trump for failing to "distance himself from Nazis," in a pre-election speech in Hamburg.

The leader of Germany's Social Democratic Party (SPD) has criticized US President Donald Trump for his reaction to the violent clashes in Charlottesville, Virginia last month.

A demonstration by far-right nationalists protesting the removal of a monument dedicated to Confederate Gen. Robert E. Lee ended in violent clashes with counter-protesters, in which a 32-year-old woman was killed and 35 people were injured.

© AFP 2021 / Josh Edelson
Trump Betrayed Conservatism by Forcing Russia to Close Its Facilities
In a response which received heavy criticism, Trump said, "Not all of those people were neo-Nazis, believe me," and that "there is blame on both sides."

On Thursday, German SPD leader Martin Schulz told an election rally in Hamburg that Germany rejects Trump's views of white supremacists and the fight against neo-Nazism.

Schulz also had sharp criticism for the right-wing Alternative for Germany, which gained 8 of 121 seats in the Hamburg state legislature in the elections in February 2015, and for Turkish President Recep Tayyip Erdogan.

"This is true for terrorists who commit cowardly attacks and unsettle people and turn them against each other. That goes for the agitators who want to drive us apart, for the racists. It is also goes for the Turkish President, Mr. Erdogan, whose interference in the German election campaign I reject," Schulz declared.

© AP Photo
Erdogan Lashes Out at German FM: 'He Knows No Limits, Who Are You Talking to?'
Last month, Erdogan told Turks with German citizenship not to vote for "enemies of Turkey" in upcoming federal elections on September 24. According to Erdogan, this includes members of the current coalition government – the SPD or Angela Merkel's Christian Democratic Union – or the Greens.

"Right now in Germany the SPD and the CDU are saying, 'We can get many votes if we batter Turkey.' I am telling all my citizens in Germany to never support those parties."

"Do not support the CDU, the SPD or the Greens. They are all the enemies of Turkey," Erdogan told reporters after Friday prayers in Istanbul on August 18, Hurriyet reported.

Schulz, formerly the President of the European Parliament, assumed the SPD leadership in January. After an initial increase in the polls, his popularity fell to below 30 percent in April, according to a survey by Stern and the channel RTL.

According to a Forsa poll published on Wednesday, the SPD is trailing the CDU by 24 percent to 38 percent. Currently in third place are the leftist Die Linke and Alternative for Germany, both supported by 9 percent of prospective voters.