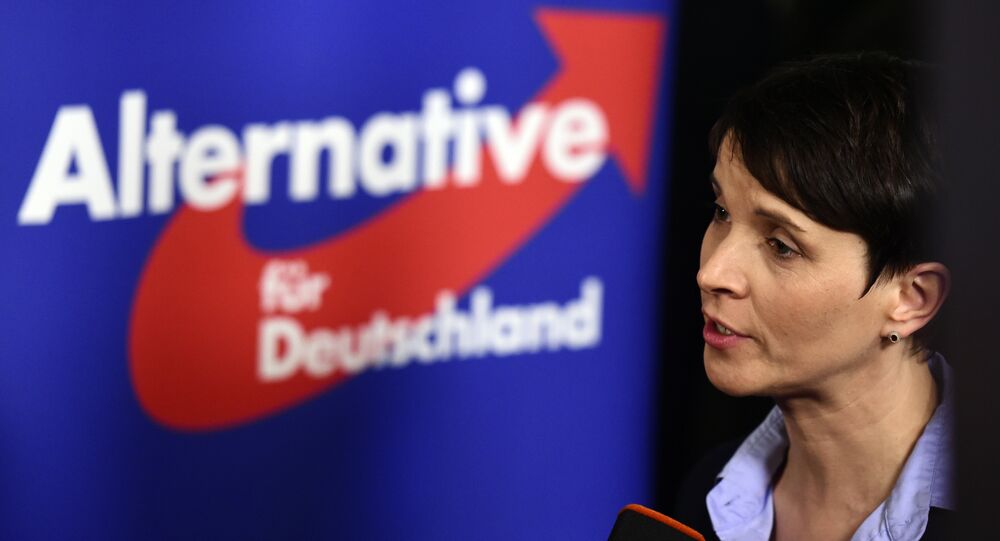 Angela Merkel is trying to win over right-wing voters with tougher rhetoric such as a burka ban, but in reality her party has become a left-wing shadow of its former self, Alternative for Germany leader Frauke Petry told Sputnik Deutschland.

© AFP 2021 / SHAH MARAI
Merkel Urges to Ban Burka 'Wherever Legally Possible'
On Tuesday Angela Merkel told a conference of her Christian Democratic Union (CDU) party that the wearing of the Islamic full-face veil should be banned "wherever legally possible."

The announcement represents a toughening of rhetoric ahead of federal elections in autumn next year, in the aftermath of state elections in which the Eurosceptic anti-immigration Alternative for Germany (AfD) party made considerable gains.

While Merkel's new burka ban has been interpreted as a swing to the right, AfD leader Frauke Petry told Sputnik Deutschland that the announcement is a response to CDU party problems, and doesn't really represent a real policy change.

"The decisions which are taken at the CDU party congress tell us about the problems the CDU is facing. A lot of party members and their supporters can't find their place in the party any more. However, we see that when the congress decides to abolish dual citizenship, the Federal Chancellor disavows it on the same say, as does the Prime Minister of Hessen, Volker Bouffier."

"If you ask, where the true center of power of the CDU is located, then (it becomes clear that) it no longer belongs to the party. It should be with the parliamentary party, but in fact it's in the government. For as long as the SPD does not allow the CDU to implement such policy statements, they will remain nothing more than pretense, false labels that only some CDU members try to believe, who do not understand that it is not their party anymore," Petry said.

"In the coming months we will see that the majority of the CDU's demands remain on paper, and will only inspire hope which the CDU won't be able to make true."

The CDU has suffered a series of damaging defeats in state elections this year. Most recently, in elections in Berlin in September support for the CDU declined 5.7 percent, while support for coalition partners the Social Democratic Party of Germany (SPD) declined 6.7 percent. The big winners were the newcomers AfD, which took 14.2 percent of the vote.

The party was formed in 2013 in response to Germany's political position with respect to the European debt crisis. Among its demands are calls for the EU to return many of its responsibilities to national governments, and a referendum on Germany's membership of the Euro single currency.

The AfD has also strongly criticized Angela Merkel's open-door migrant policy, calls for Germany to strengthen its border controls, and also take a tougher stance on the integration of migrants and refugees.

"The AfD sees the growing number of Muslims as a major challenge for our state," the party said in its manifesto published earlier this year.

© Photo : ARD
Burka-Merkel: 'Islamophobic' German TV Show in Photoshop Scandal
The AfD says it "wants to prevent Muslims from becoming religiously radicalized with violent Salafism and religious terror," and proposed a range of measures to this end. These include restrictions on Islamic organizations in Germany, and banning minarets, the Islamic call to prayer and full-face veil for women.

Petry said that she doesn't fear losing votes to Merkel's swing to the right, because while the German leader's words may represent a tougher stance on migration and integration, skeptical voters will demand action to back up the rhetoric.

"Of course, we are always talking about votes. But at the end of the day, there have to be some kind of visible changes. If I try to separate these two things, then I'm glad that at least something is happening in the realm of discussion. I just would like to see the media clearly state what they see: that this so-called swing to the right – which you could also call the CDU coming back to its conservative roots – is no more than a label. Just as I said: in a few months we'll find that nothing has really changed," Petry said.

The AfD leader said that despite the new challenge from the CDU, the party is expecting a good result in next year's federal election, which will enable them to become Germany's biggest opposition party. The AfD will not seek to enter coalition with the CDU any other partner, Petry said.

© REUTERS / Max Rossi
Angela Merkel's CDU Party in Migrant U-Turn to Counter Right-Wing AfD Threat
The AfD has been able to carve out a popular niche in German politics because the CDU has moved left, away from its conservative roots, and Germany's classically liberal Free Democratic Party (FDF) has declined in influence.

"Everybody knows that AfD has taken the positions the CDU had 15 or 20 years ago, when the CDU was still quite conservative on fiscal and social issues. There was also quite a strong liberal influence. In the 1990s, national liberals finally stopped feeling that the FDF expresses their interests. Recently people have started to notice that we are the only ones who say that first, there must be a reasonable state of affairs in our own country, and we must act as patriots for our own country in the best sense," Petry said.

"In terms of content, the CDU has been absolutely gutted. It has become built around the figure of Angela Merkel, and one can't see any conservative aspect to the policies around climate change and migration any more. Unfortunately, it acts just as Utopian as red, green and leftist politicians, so it's more accurate to call them Social Democrats."

"In any case, we will continue to pursue our political issues. If there are reasonable proposals we will agree to them, no matter where they come from. (For example,) in Mecklenburg-Vorpommern, Die Linke has agreed to back an AfD proposal, and in Saxony we are backing proposals from Die Linke and the Greens. However, the big parties persistently refuse to cooperate with us in the public interest, even on a one-off basis and that's a shame for democracy," Petry said.