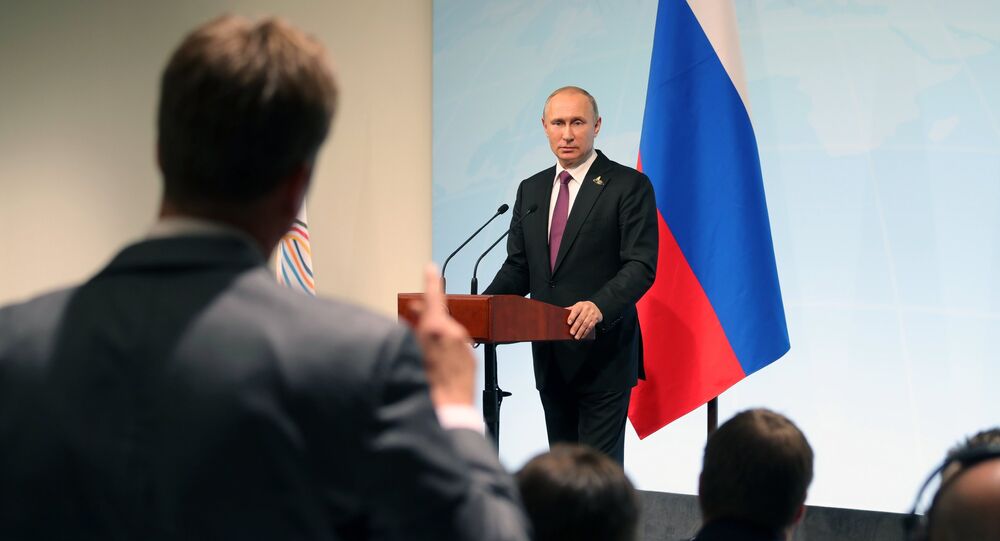 Vladimir Putin held a press conference on the sidelines of the G20 summit in Hamburg. Russia’s President revealed to the journalists details of the meeting with Trump, what the top leaders discussed during the summit and even whether Russia plans on meddling in the German elections.

"The development of the global economy was the main issue we were focused on," Putin told reporters.

© Sputnik / Alexander Astafyev
Influence of Sanctions on Russian Economy Exaggerated - Bank of Russia
Money laundering was the second most important topic of this summit. Another important subject the leaders discussed during the G20 summit in Hamburg was fighting against terrorism.

Another issue the leaders discussed was girls' education.

Putin expressed hope that the G20 summit will help to improve the situation in the global economy.

Speaking about the position of the Russian economy on the global arena, Vladimir Putin said that Russia is not affected by sanctions. "We discussed free trade and fighting protectionism. So, we're making progress. Our progress is not as huge as we hoped," Putin said, adding that "the Russian economy is obviously growing."

"Russia's economy grew by 3% in May," the president noted.

"We have a low unemployment rate," Putin said. "Our Federal revenue has grown by 40%. All of this has made us quietly optimistic."

On Russia's alleged meddling in US elections

"We discussed this issue," Putin said, speaking about the meeting with Trump.

© Sputnik / Michael Klimentyev
The Meeting the World Waited For: What did Putin and Trump Manage to Agree Upon?
"The US president has raised a question [about an alleged meddling], we have discussed the issue. It was not one question, there were a lot of questions and he paid a lot of attention to the issue. Our position is well-known and I have reiterated it — there is no reason to consider that Russia has meddled in the Us electoral process," Putin said at a press conference in Hamburg.

The two presidents agreed to set up a joint group to work on cybersecurity, Putin added.

The Russian leader said that he had established a personal relationship with the US president, adding that Trump was able to properly perceive his interlocutors, quickly analyze information and to answer questions, as well as responding to the issues that could emerge during discussions.

"The Trump you see on TV is very different from the real person," Putin said, answering a question about meeting with US President Donald Trump.

"I think that if we build relationship in the way, we communicated yesterday, then there is every reason to suppose will be able to restore the level of cooperation we need, at least partially," Putin said.

President Trump asked a lot of questions about Russia's alleged meddling in the 2016 US presidential election, Vladimir Putin answered all of them.

"He [Trump] raised many questions on the issue. I answered all these questions, as far as I could. I think that he took it into account and agreed. Actually, you would better ask him how he found it," Putin added.

On the situation in the Middle East

The Qatari diplomatic crisis was not closely discussed at the summit, but "everybody realizes that this situation could be a threat."

© REUTERS / Omar Sanadiki
Syria Safe Zones Lead to 'Discernible Reduction in Levels of Violence' - UN
Answering a question about the prospects of a Syrian solution, Putin said that he is optimistic about this. The Russian president discussed the issue with Donald Trump.

One of the main issues on the agenda of the Syrian crisis settlement process are the parameters and the functioning of the de-escalation zones as Syria's territorial integrity is paramount, Russian President Vladimir Putin said Saturday.

“The fact that active military operations were ceased and that currently we are working on these de-escalation zones is a huge step forward. Now, we have to agree on their concrete borders and on how security will be ensured at the zones. It is very painstaking and at first glance even tedious, but it is extremely important and responsible work,” Putin said after the G20 summit.

Commenting on Tillerson's remark on the future of Bashar Assad, Putin said it's up to the Syrian people to decide their own future.

On relations with Germany

"Germany is our main trade partner," Putin told reporters answering the question about Russia's plans to meddle in German elections. "Why should we do that?"

Trump and Putin Go Into Overtime