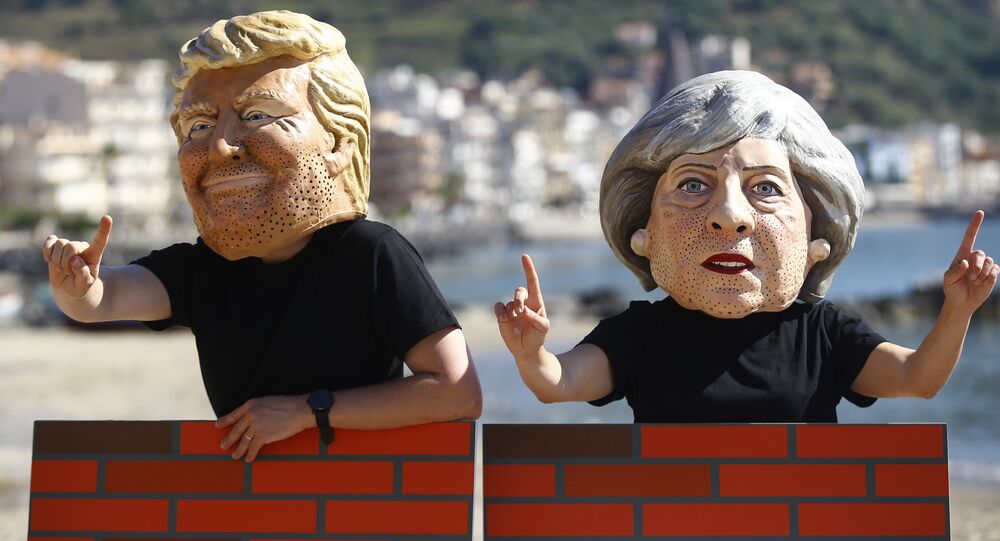 Downing Street has denied a visit to the UK by US President Donald Trump has been shelved after it was left out of the Queen's Speech. Theresa May is up to her eyes in problems and huge demonstrations are expected to greet Trump.

Donald Trump's state visit to UK on the backburner after being left out of the Queen's Speech. Here's a reminder how quickly it was offered pic.twitter.com/f2hKh7aLjG

© REUTERS / Carl Court
Queen's Speech Sees Embattled May Back Off From Key Manifesto Commitments
​On Wednesday (June 21) the Prime Minister omitted several controversial manifesto promises — including removing the ban on fox hunting and introducing new grammar schools — from the Queen's Speech, which outlines what plans the British government has for the forthcoming year.

After the election Downing Street played down speculation that an invitation to Mr. Trump had been withdrawn in the light of recent events.

"An invitation has been extended to the President and has been accepted. A date has not been fixed, while a date has been fixed for the King of Spain's visit," a Downing Street spokesman told Sputnik.

​He played down the suggestion, widespread on social media, that Trump will be coming to the UK for a state visit on October 5-8.

"I can't say if it will be this year," the spokesperson told Sputnik.

Wikipedia claims Trump will visit London and the North East of England, as well as Aberdeenshire in Scotland, where he owns a large and controversial golf course.

© AFP 2021 / Andy Buchanan
US tycoon Donald Trump (C) is escorted by Scottish pipers as he officially opens his new multi-million pound Trump International Golf Links course in Aberdeenshire, Scotland, on July 10, 2012.
Several Facebook groups have already been set up with protesters planning huge demonstrations against Trump, who is despised by campaigners angered by racist and Islamophobic statements he has made and his vile behavior against women, which was revealed during the presidential campaign.

When Trump visited Brussels last month for a NATO summit thousands of people turned out to protest at his presence. German police are expecting huge demonstrations in Hamburg on July 7, when President Trump arrives to attend a G20 summit.

In January Mrs. May visited the US and invited him, on behalf of the Queen, to visit Britain on a state visit.

'Accidentally' forgot to read the bit about President Trump visiting. Not to worry. #Awkward #QueensSpeech

​Later that day, Trump signed an executive order "Protecting The Nation From Foreign Terrorist Entry Into The United States," suspending entry to the country for all nationals of Iran, Iraq, Libya, Somalia, Sudan, Syria and Yemen for 90 days, banning all refugees from entry for 120 days and blocking all Syrian refugees from entering the United States for a yet undetermined period of time.

The decree triggered sharp criticism not only in the United States, but throughout the world, including in the United Kingdom, and resulted, in particular, in calls to cancel Trump's invitation to Britain.

© REUTERS / Carlos Barria
British Prime Minister Theresa May speaks as US President Donald Trump listens during their joint news conference at the White House in Washington, US, January 27, 2017

The UK authorities responded that despite disagreement with US policy they would still welcome the US president.

But the political landscape in Britain has changed out of all recognition since January.

Theresa May called a snap election in April, hoping to increase her majority in Parliament.

But after an inept campaign she ended up losing 13 seats and has been left scrabbling around trying to get support from Northern Ireland's Democratic Unionist Party in order to govern.

Then last week a horrific fire broke out in Grenfell Tower in west London, killing at least 79 people. The Conservative-controlled Kensington Council were blamed for failures which led to the failure but the government has also been accused of dragging its feet over a national fire safety review.

All in all, a state visit to London by President Trump would be extremely unwelcome for Mrs. May and also for the Metropolitan Police, which would be expected to police it.

But if Mrs. May does back down and withdraw the invitation it would inevitably damage her relations with the White House.