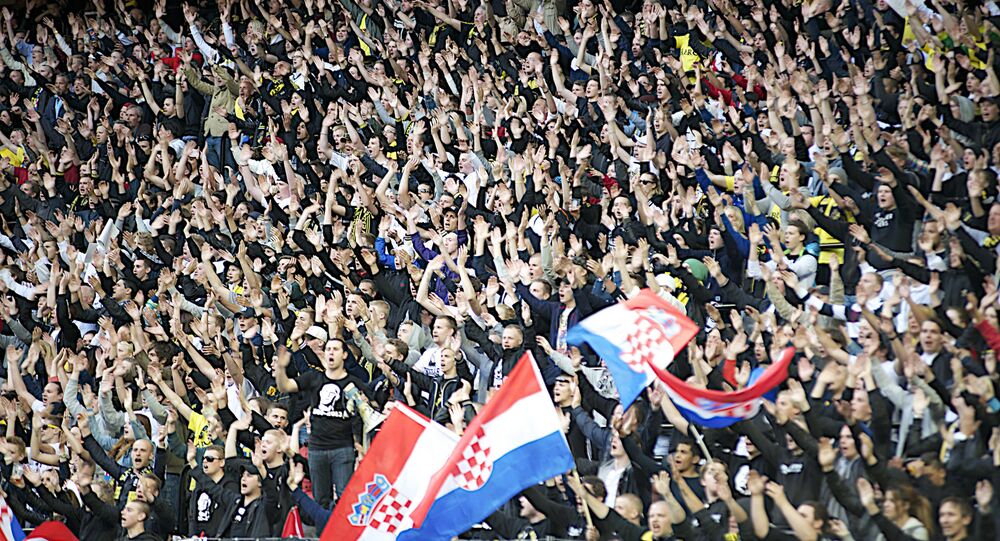 Thousands of British and Dutch football fans are arriving in Stockholm ahead of Wednesday (May 24) night's Europa League final between Manchester United and Ajax of Amsterdam. Security at the Friends Arena is expected to be stepped up after Monday (May 22) night's suicide bomb attack in Manchester.

Ironically, many United fans will be flying from Manchester airport after the horrific attack at an Ariana Grande concert in the city, which killed 22 people and injured dozens more.

© REUTERS / Andrew Yates
Vehicles are seen near a police cordon outside the Manchester Arena, where U.S. singer Ariana Grande had been performing, in Manchester, northern England, Britain, May 23, 2017.

Around 20,000 English fans are expected in Stockholm for the game, half of whom will not have tickets.

The Friends Arena — the home of Sweden's AIK club — has a capacity of 51,000 but European football's governing body UEFA, in their wisdom, have allocated only 9,500 tickets for United.

Preparations inside the Stockholm Friends Arena ahead of the #UELfinal. This is what awaits you, supporters of @AFCAjax and @ManUtd! pic.twitter.com/b2X3BG74IC

Ajax are believed to have a similar allocation, which means that around 30,000 tickets will have been sold to people who are not fans of either club.

Many of them will be local Swedes but many are thought to have fallen into the hands of ticket touts.

Security was already due to be high for the game because of the threat of attack by Islamists. But it will have been stepped up a notch following the horrific attack in Manchester.

The Friends Arena ironically played host to Ariana Grande on her Dangerous Woman tour on May 8.

UEFA published a statement on their website on Tuesday (May 23) morning:

"UEFA is shocked by last night's attack in Manchester. Our thoughts are with the victims and the families of those affected. There is currently no specific intelligence which might suggest that any of the UEFA Europa League final activities in Stockholm may be the target of attacks. UEFA has been closely working with local authorities and the Swedish FA for many months and the terrorist risk had been taken into account since the very beginning of the project. Furthermore, a number of additional security measures were implemented following the attacks in Stockholm last April. Due to the tight security arrangements, UEFA urges fans to arrive at the stadium as early as possible, as detailed checks will be made at the entrances, resulting in potential delays in accessing the stadium."

Last month five people died when an Islamist drove a stolen truck into a department store in the center of Stockholm. Among the dead was an 11-year-old girl, Ebba Akerlund.

The attacker was Rakhmat Akilov, a 39-year-old asylum seeker from Uzbekistan who had been radicalized after coming to Sweden in 2014.

The Uzbekistan government said after the attack they had tried to warn a Western ally about Akilov.

© AP Photo / Geert Vanden Wijngaert
Dutch Football Fans Riot After Their Team Fails to Secure Title
Sweden took in large numbers of refugees from Syria, Iraq, Afghanistan and other countries in recent years, some of whom have failed to integrate into Swedish society.

There had already been concerns about the possibility of violence between United and Ajax fans.

Ajax have a notorious hooligan element, known as the F-Side, and in 2012 there were clashes at Old Trafford before a Champions League game between the team, after which 76 Ajax supporters were arrested.

There are also fears that fans from their arch-rivals Feyenoord may go to Stockholm to try and stir up trouble.

Earlier this month Feyenoord fans rioted in Rotterdam after they failed to secure the Dutch league title. They won the title — their first in 19 years — the following weekend.

Feyenoord's most famous hooligan supporters are known as the SCF — which simply stands for Sport Club Feyenoord — and frequently clash with the F-Side.