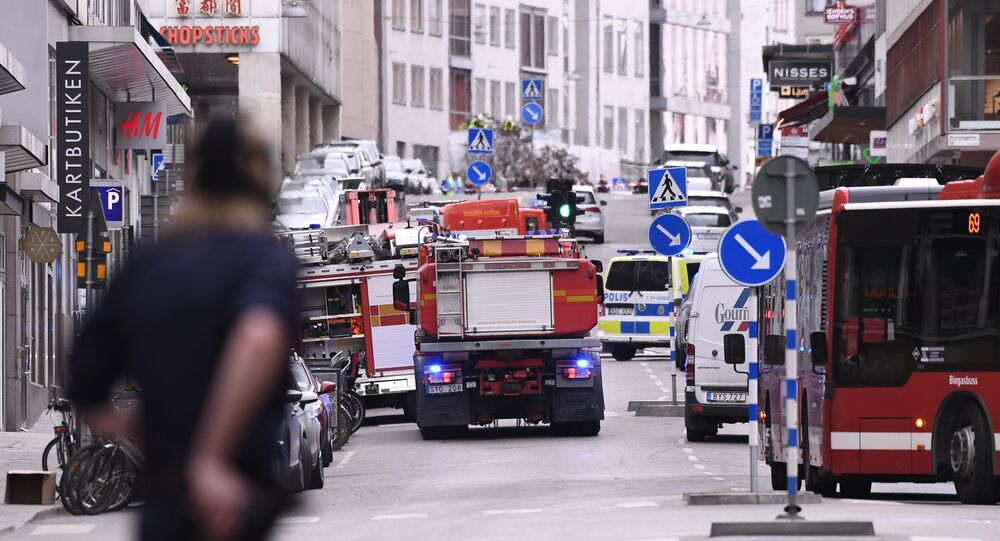 A truck has rammed into people on a street in central Stockholm, media reported. The police are considering the incident to be a possible terrorist attack.

Three are killed in the truck-ramming incident, according to Sveriges Radio. Later, the police confirmed the information, adding that the number of casualties may increase.

Police on the spot confirmed that three people are dead and eight are injured, once again urging the public to leave the central parts of Stockholm, SVT reported.

A spokesperson for Stockholm police told Sputnik there were several injured in the incident, however at the moment there were still not enough details.

"We don’t have any details because there are a lot of officers on the spot. For the moment we can confirm that the vehicle has driven into the people. Some people are injured. I don’t have the numbers and don’t know how serious it is," the spokesperson said.

Martin Svenningsen, reporter on P4 Extra, is on the street said: "I saw at least three dead, but there are probably more. It's a complete mess here."

Something's happening on Drottninggatan and around Stockholm. pic.twitter.com/YPbrZSe5Mb

According to Aftonbladet, a police car is driving around central Stockholm, shouting “warning, terrorist attack” through the loudspeakers.

According to Aftonbladet, a truck crashed into the Åhléns department store on Drottningsgatan (Queen Street), a major pedestrian street in the Swedish capital.

The truck stopped after hitting the front of a department store on the street, Radio Sweden said.

The truck was driven into a crowd of people by an individual with a balaclava over his face, an eyewitness told Aftonbladet, which was confirmed by a police source.

It turned out that the suspect in the attack had stolen the truck.

The Spendrups brewery confirmed to Dagens Nyheter that the truck that drove into the Åhléns was theirs. Communications Director Mårten Lith said that the driver of the truck made a delivery to the Caliente restaurant to a side street off Drottninggatan. When the driver was about to unload the truck, a person got in and drove away. Spendrups consider the car as stolen, adding that the driver is shocked.

Witnesses and sources told Aftonbladet that a man was taken into custody by police at Olof Palme street a short distance from the spot where the truck drove into Åhlens.

The truck is claimed to be owned by the Spendrups brewery, Aftonbladet reported.

"We have not got hold of the driver. We know nothing about what is happening," Spendrups Communications Director Mårten Lyth said.

Prime Minister Stefan Löfven said that "Sweden has been attacked." "Everything points to a terrorist attack," the premier was quoted as saying by Aftonbladet.

An emergency meeting is being summoned at Social Affairs Ministry via loudspeakers.

"I saw hundreds of people ran, they ran to save their lives," Anna, who witnessed the incident told Aftonbladet.

​According to police, the incident took place at 14:53 local time.

​After a loud bang, smoke is rising from Åhléns and the truck, people are fleeing the scene.

"I went along the main street when a big truck came out of nowhere. I could not see if anyone was driving it but it got out of control. I saw at least two people being run over. I ran as fast as I could from there," eye witness Dimitris told Aftonbladet.

#Sweden
Ppl with trucks shooting ppl outside in #drottninggatan around Zara home shop.don't come around over there —isn't safe

Police urge people to stay indoors. The House of Parliament is cordoned off. Railway operator SL’s press office that that all metro traffic in the city has been switched off, SVT reported.

At the request of the police, all train traffic via Stockholm Central Station has been suspended, Transport Agency said in a press release.

A witness told Aftonbladet about shootings in the vicinity of Fridhemsplan metro station.

Later in the day, Swedish police ordered the evacuation of a central train station in the city, according to TT news agency.

"US citizens in Sweden: Reports of truck driven into crowd in Stockholm. Monitor local news for updates," the State Department said in a Twitter post.