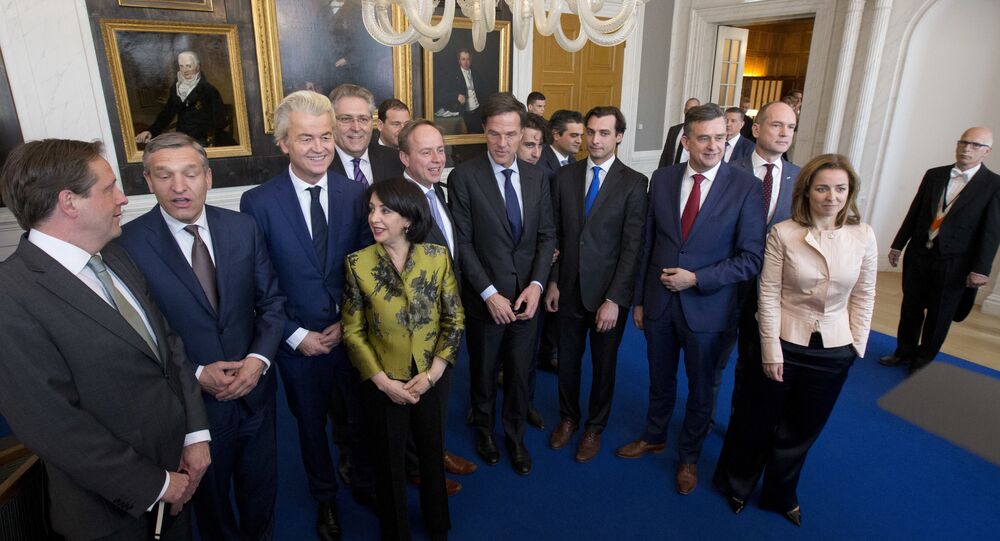 The Netherlands remains without a government 61 days after the country's general election after talks about forming a coalition broke down. The sticking point remains the question of immigration.

In March Prime Minister Mark Rutte's center-right VVD party won 21 percent of the vote, fighting off a challenge from Geert Wilders' Freedom Party, which stood on an avowedly anti-Muslim and anti-immigrant agenda.

The following day Bart Claes, a member of Belgium's right-wing Vlaams Belang (Flemish Interest) party, claimed Rutte's better-than-expected performance had been due to his tough stance on refusing to allow Turkish politicians in to campaign among Turkish immigrants.

Mr. Rutte had tried to form a coalition with the liberal D66 party, the Christian Democrats and the Green-Left. But the sticking point was immigration.

The Green-Left, who had a policy of supporting open borders, refused to go along with the stricter controls which the other three parties wanted.

Edith Schippers, the minister who had been tasked with forming the new government, will submit a report to parliament about the failure of the coalition talks. She told a press conference: "Dear friends, it did not work. The substantive differences proved too great."

Mr. Rutte said the breakdown in the talks was "unfortunate."

"I'm not going to work out who was on which side of the gap on migration. I'd love to form a government, unfortunately it did not work. This round is over, we will now see how we go," Green-Left leader Jesse Klaver said.

Mr. Wilders, whose party secured 13 percent of the vote, welcomed the collapse of the talks, saying simply "very good news; no Greens,'' but he is thought to be keen on joining new negotiations.

Immigration was a major issue during the election campaign, with Wilders in particular seeking to curb the number of people moving to Holland from the Middle East and North Africa.

The Netherlands has a high number of Moroccan immigrants who were the focus of much of Wilders' rhetoric.

Wilders was convicted of insulting a group and inciting racial discrimination over remarks he made at a rally in March 2014. He asked whether the crowed wanted "fewer or more Moroccans in your city and in the Netherlands?" When many in the crowd shouted "fewer" he replied: "I'll take care of that." Despite the court's verdict, Wilders still pledged to limit the number of Moroccans in the Netherlands and even claimed "Moroccan scum" were making "the streets unsafe" during a visit of Rotterdam.

It took Mr. Rutte 52 days to form a coalition after the general election in 2012. But the Socialist Party, who were his coalition partners on that occasion, had their number of votes decimated this time around.

Professor Hans Dorussen, from the University of Essex, said the failure of the talks was not a big surprise and he said he expected fresh talks to take place and said they may take "half a year." Asked if it was possible that Wilders would be invited to join talks about a coalition, instead of the Green-Left, he told Sputnik:

"At this time it's still highly unlikely. Rutte has again this morning said he is not interested in governing with the Freedom Party and even if the Liberals, the Christian Democrats and the Freedom Party got together they still do not have enough for a coalition and it's very hard to find another party willing to join that sort of government."

Professor Dorussen said ultimately it is possible that there might have to be another election if no feasible coalition can be found.

"At the moment there are still a number of options on the table. Instead of the Green-Left there is a small party called the Christian Union who could be asked to join, or they could try a minority government. The Liberals, the Christian Democrats and D66 between them are just short of the 75 seats they need but they are not that far off and they might try to govern as a minority government."

In comparison, coalition talks take even longer in neighboring Belgium. It took 541 days for Brussels to agree a coalition after the June 2010 election. The political differences are exacerbated by tensions between the French and Flemish speaking halves of Belgium.

Belgium's government seems extremely stable compared to Italy during the 1970s and 1980s when the country would often have coalition governments which lasted only a few weeks.

Dutch Election Result: the Start of a Push-Back Against the Right Across the EU?