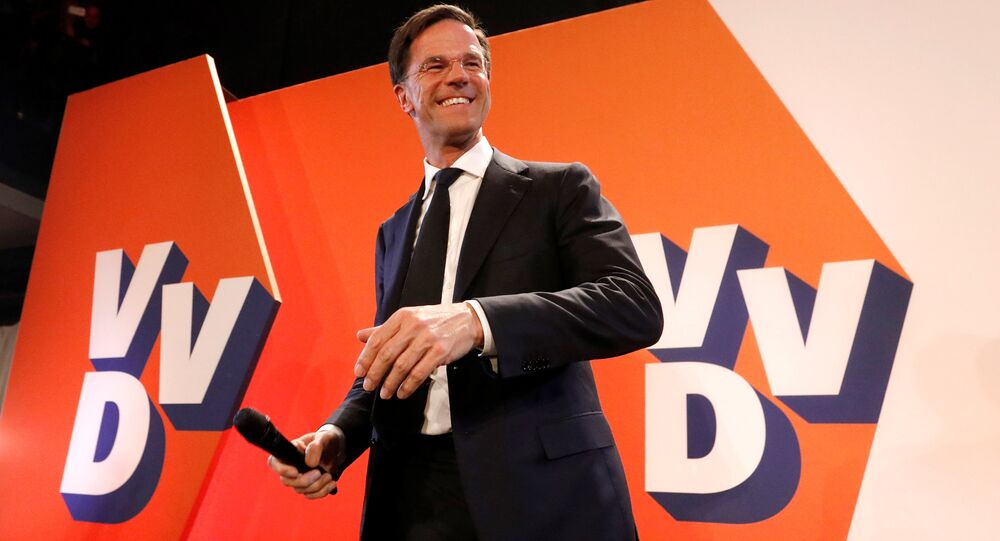 The Dutch ruling People's Party for Freedom and Democracy (VVD), led by Prime Minister Mark Rutte, won the general election only because of a row with Ankara over a ban on pro-Turkish referendum rallies in the Netherlands, a spectacle put on by VVS to win votes, a member of the Belgian right-wing Vlaams Belang (Flemish Interest) party told Sputnik.

MOSCOW (Sputnik) — Amid a diplomatic scandal between Ankara and Amsterdam over the shutting down of rallies in support of Turkey’s upcoming constitutional referendum, VVD party came first in Wednesday’s general election securing 33 out of 150 seats in parliament. While Mark Rutte claimed the ban on rallies were in the interest of national security, his government's actions also served the purpose of gaining his party attention at a crucial point in the election.

"The only reason why Rutte managed to stay the biggest party was because of the show he managed to put on during the last couple of days where he told the Turks not to hold any rallies on Dutch soil … All things we saw during the last couple of days were just one big show. In reality, just like [German Chancellor Angela] Merkel, Rutte will do nothing to stop the further advance of Turkish influence and arrogance in Europe," Bart Claes said.

The main competitor of the ruling VVD party, the far-right Party for Freedom (PVV) led by Geert Wilders, came in second in the election and increased the parties’ presence in parliament from 15 to 20 seats.

"It’s still a big victory for Wilders. They managed to get a lot of additional seats in parliament and finished second … Right-wing parties are becoming the mainstream. It’s only a matter of time. I personally think Marine Le Pen has a very good chance of becoming the next president of France," Claes added.

The PVV platform includes proposals to close all mosques in the Netherlands, ban the Quran, withdraw from the European Union, the cutting of income tax, and increased defense spending, all at no extra cost to citizens.

© AFP 2020 / STEPHANE DE SAKUTIN
Hollande, Merkel Condemn Erdogan's 'Unacceptable' Nazism Jibes
As a reaction to the Dutch authorities actions toward Turkish officials Ankara on Monday officially suspended high-level political contacts with the Netherlands, barred the Dutch ambassador from returning to Turkey, and put all high-level political discussions with the Netherlands on hold and halted all Dutch diplomatic flights bound for Turkey.

Parliamentary elections will be held across numerous European countries in 2017, including France, Germany, Norway and the Czech Republic. Additionally, the future president of France and the chancellor of Germany are to be elected this year.