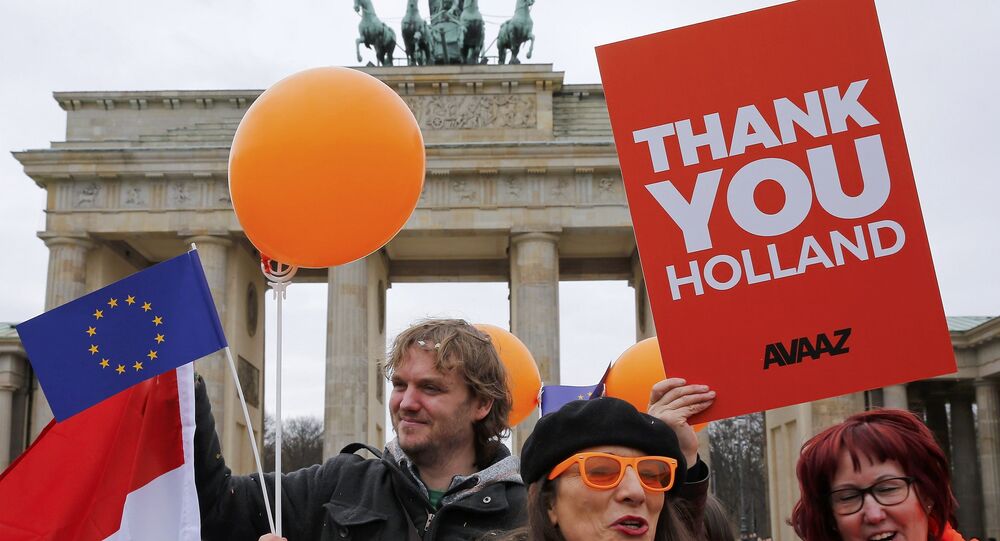 The fact that Dutch Prime Minister Mark Rutte's center-right party has seen off the anti-EU, anti-Islam party of Geert Wilders - albeit with a reduced majority - in the Netherlands general election has been greeted with relief in Europe's capitals.

Rutte's People's Party for Freedom and Democracy (VVD) took 21.2 percent of the vote, with Wilders' Party for Freedom (PVV) taking 13.1, but adding five more seats to its tally. Now the horse trading begins on forming a coalition.

However, the result has brought a sigh of relief across Europe, as many had feared a Brexit-style backlash against the pro-EU establishment amid growing Islamophobia, caused by the migrant crisis and recent terrorist attacks.

​Twitter: "Super proud of all our voters, more than 1 million Dutch! Thanks! 12 years after it was founded PVV is the 2nd position of NL! Awesome!!"

Wilders played his anti-EU and anti-Islam cards right from the outset, garnering increased support throughout the campaign. However, the diplomatic spat with Turkey — over rallies in the Netherlands by Turkish citizens in support of controversial constitution changes in Turkey — has seen Rutte's political worth rise, as he put up a strong defense against Ankara.

There are elections in France, April and May, as well as in Germany, September, with both countries experiencing a rise in nationalism. Marine Le Pen's Front National Party in France currently is currently top polling at 26.5 percent, according to IfoP-Fiducial.

"The Netherlands is showing us that a breakthrough for the extreme right is not a foregone conclusion and that progressives are gaining momentum," said French presidential candidate Emmanuel Macron, who is expected to face Le Pen in the second round of voting, May 7.

Meanwhile, Germany's right-wing Alternative fur Deutschland (AfD) is third in the polls, on 11.5 percent, according to INSA, riding on a wave of Islamophobia and nationalism.

"The Netherlands are our partners, friends, neighbors. Therefore, I was very happy that a high turnout led to a very pro-European result, a clear signal," said German Chancellor Angela Merkel, who will run for re-election in September.

Rutte's campaign was boosted by his sense of statesmanship and defense of the Netherlands in the latest row with Turkey.

The amendments to the constitution include the introduction of an executive presidency that would replace the existing parliamentary system of government and the abolition of the Office of the Prime Minister.

The Dutch result is being taken as a sign that the rise in nationalism throughout Europe may not necessarily result in a lurch to anti-EU right wing parties seizing power, destabilizing the EU.