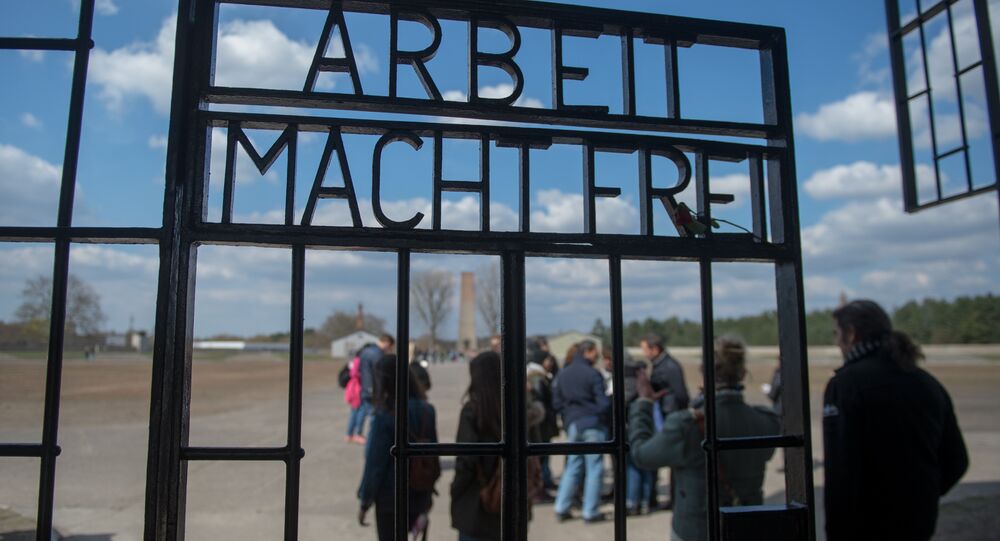 Bjoern Hoecke, Alternative fur Deutschland (AfD)'s parliamentary spokesperson and regional deputy in the state of Thuringia, has criticized Berlin's Holocaust memorial, and called for Germany to stop atoning for past deeds.

Speaking at a party rally in Dresden, Hoecke said German history had been made to look "lousy" and "ridiculous."

"Our state of mind is still one of a totally defeated people. We Germans are the only people in the world who have planted a monument of shame in the heart of our capital. We need nothing less than a 180-degree shift in the politics of remembrance. There is no moral responsibility to make yourself disappear. Germany must build up a positive relationship with our history," he said.

The audience greeted his remarks with voluble chants of "Germany, Germany," and a standing ovation. However, the response to his speech by other German politicians was decidedly less enthusiastic.

German Vice Chancellor and Minister for Economic Affairs and Energy, Sigmar Gabriel, said a "chill" ran down his spine upon hearing the oratory in a Facebook post — although he attributed Hoecke's remarks to an attention-seeking tendency on the part of Germany's right-wing parties.

"The AfD lives on provocation, these remarks give right-wing populists media attention not granted to them democratically. Under National Socialism, unimaginable crimes were committed. Germany led an extermination war on homosexuals, Jews, Roma people, and politically different thinkers. It took a long time, but we have dealt with these unimaginable crimes. We have developed a memory culture, which encompasses far more than ritualized mourning over committed crimes. And in politics and society, we try to make "never again" the guideline of our actions. Hoecke despises Germany, which I am proud of," he added.

The case also highlighted an ongoing schism within AfD.

In an interview with German youth newspaper Junge Freiheit (Youth Freedom), AfD co-leader Frauke Petry said the episode demonstrated Höocke had become "a burden" on the party, due to his "go-it-alone attitude" and "constant sniping." In a subsequent interview with the same outlet, AfD boss Jorg Meuthen said he saw "no need for action" in respect of Hoecke.

Nonetheless, Meuthen said Hoecke "does the party no favors" with such statements, and him to be more careful about his choice of words in future, although Meuthen said there was "nothing wrong" in challenging the "one-sided" view of German history.

A January 16 poll placed the far-right party at 13.5%. Germany's Federal Constitutional Court in Karlsruhe ruled three days later that while the party was anti-constitutional and had links to National Socialism, the party should not be banned. Coupled with recent news that a reissue of Adolf Hitler's Mein Kampf has quietly become a bestseller in the country after it was unbanned by authorities, some may be concerned about Germany shifting rightwards anew.

However, Kai Arzheimer, professor of Political Science at the University of Mainz, says that extremism is in fact in decline.

"The Constitutional Court refused to ban the NPD because it is so electorally irrelevant. Right-wing populist parties have become a relevant force in almost all Western European countries since the 1980s, but Germany has been an exception so far, partly because the Christian Democrats and Christian Social Union are an extremely broad church that covers some positions at the right margin of the political spectrum, and partly because previous far-right parties such as the NPD, the DVU, or the Republikaner, were deemed unacceptable because of their associations with Germany's past," Professor Arzheimer told Sputnik.

Nonetheless, Prof. Arzheimer acknowledged that while the radical right is nowhere near achieving a majority in any Western European country, traditional centrist parties are losing their historical base of working and lower middle-class voters.

"Their presence is disrupting the political process and sometimes necessitates the creation of grand coalitions, which further fuels the discontent that gave rise to them in first place. Centrist parties of all stripes should refrain from copying the populist rhetoric that offers simple solutions for complex problems. Instead, they should try to reconnect with their erstwhile voters by spelling out the rationale behind the decisions they take," he added.

'It Will Be Fun': AfD Politician to Challenge Merkel at Upcoming Election