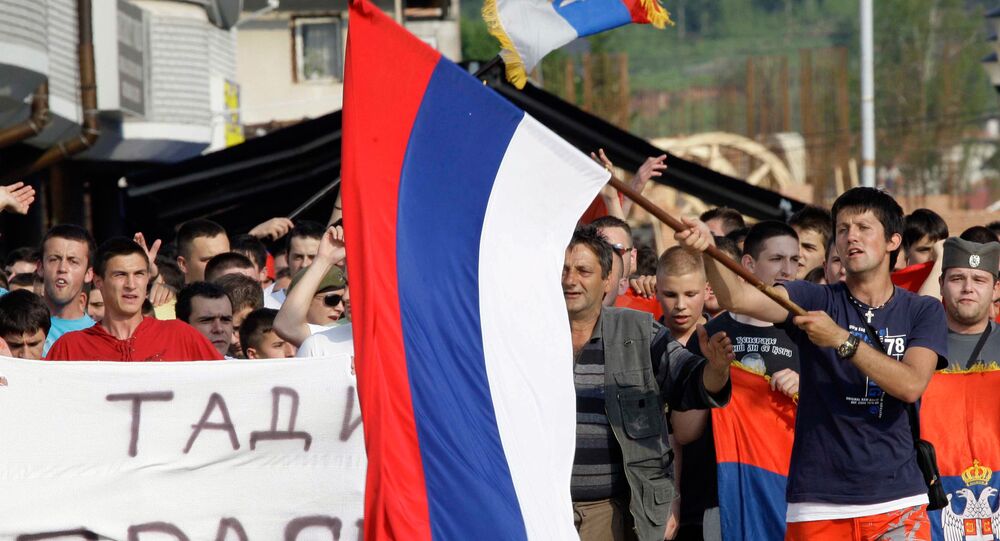 NATO and the High Representative for Bosnia and Herzegovina have aggravated tensions in Republika Srpska following the recent celebration of RS day there.

© AFP 2021 / STR
Republika Srpska - ‘The Pyramid of Western Politics is Tumbling Down’
On January 9, the residents of Republika Srpska, one of two self-governing entities which constitute the Federation of Bosnia and Hercegovina, celebrated RS Day, a public holiday which commemorates the day it was founded in 1992.

The January 9 holiday has been the subject of tension between RS and the federal authorities of Bosnia and Hercegovina, including several Constitutional Court cases.

Last year the Constitutional Court of Bosnia and Herzegovina declared the holiday unconstitutional after a legal challenge from the Bosniak member of the country's tripartite rotating presidency, Bakir Izetbegovic.

In September RS President Milorad Dodik challenged the authority of the Constitutional Court to strike down the legislation and held a referendum on the issue, in which 99.81 percent of voters in Republika Srpska supported an initiative to make the day a state holiday.

The day after this year's holiday, on January 10, the High Representative for Bosnia and Herzegovina Valentin Incko sought to remind Bosnian Serbs that their holiday remains unrecognized by the federal government. In doing so, he caused outrage in RS by comparing the celebration of January 9 with that of the genocidal World War Two Independent State of Croatia.

"For the international community, the only entities which exist are those in the Dayton Agreement, Bosnia and Herzegovina and Republika Srpska, which gained their legitimacy November 21 1995 in Dayton," said Incko, whose job it is to oversee the Dayton Agreement.

"If we are going to start celebrating holidays like January 9, then some people might start to celebrate, let's say, April 10, the day the Independent State of Croatia was established. I think that that doesn't occur to anybody, and it is necessary to look towards the future, not the past," Incko said.

© AFP 2021 / STRINGER
Croatian Serbs in Uproar After War Veterans Unveil Memorial to Fascism
The Independent State of Croatia (NDH) was a puppet regime established by Germany and Italy in 1941 following the invasion and occupation of the Kingdom of Yugoslavia. According to varying estimates, between 83,000 and 700,000 Serbs, Roma and Jews were murdered under the fascist regime, which established several death camps including the infamous Jasenovac complex.

Historian Cedomir Antic, who has written a book on the history of Republika Srpska, told Sputnik Srbija that the two dates are completely incomparable, and urged Incko to hold history in higher regard.

"Does he really think, since RS is in a way under the guardianship of the EU which it wishes to join, that he is the guardian of a genocidal creation, as Hitler was the protector of NDH? What are all the implications which such irresponsible behavior can have? Unfortunately, he is an overpaid person who doesn't have the powers held by his predecessors. He is powerless, but as just as bad and malicious as Paddy Ashdown was," Antic said.

"In several judgments, particularly in the judgment of General Perisic, the Hague Tribunal clearly stressed that the RS Army was not a criminal army. It was neither the SS nor Wehrmacht. In the 20 years since the end of the war, that day (January 9) has been celebrated. Now it has been abolished by a court whose mandate has expired. However, it is a serious problem when the High Representative, who claims to be neutral, says that. It never occurred to him to say that March 1, the day that is celebrated in the Bosniak parts of the Federation of Bosnia and Hercegovina, is unconstitutional," Antic said.

The historian said that Incko, who is an Austrian diplomat, should pay more attention to history rather than calling for others to forget the past.

"Speaking of continuities, why doesn't Mr. Inzko talk about the continuity of his country? Austria was not a victim of the Third Reich. The Austrians, unfortunately, were a bastion of the Third Reich. They accounted for 7 percent of the population and 50 percent of the war criminals. They are a country which, thanks to successful diplomacy, has managed to convince the world that Beethoven was Austrian and Hitler German, and neither one nor the other is true. So Mr. Inzko should consider being a little more moderate. I believe that he is an antifascist and has good intentions, but, unfortunately, those good intentions are not visible from his work, "said Antic.

NATO warns military not to participate in RS day celebrations

© Photo : Facebook/ Студенти за истину
Yugoslavia Bombings' Victims May Be Painted on Russia-Donated MiG Fighters to Serbia as a Hint to NATO
Incko was not the only international representative in Sarajevo to criticize the RS day celebrations. Giselle M. Wilz, Commander and Senior Military Representative of the North Atlantic Treaty Organization Headquarters in Sarajevo, said that the participation of the Third (Republika Srpska) Infantry Regiment is unconstitutional and warned participants that they face disciplinary action for taking part.

In response RS President Milorad Dodik called on NATO to stay out of the country's internal affairs, and reiterated that RS is following a policy of military neutrality.

"This is unequivocal pressure on the local judiciary, one of many other instances in which they (NATO) are trying to direct (action) against soldiers and officials who participated in the celebration of the Day of the Republic," Dodik said.

He added that Republika Srpska is considering withdrawing from an agreement on formation of the Armed Forces of Bosnia and Herzegovina.

"We should make the first step and to gather Republika Srpska's politicians and officials to find out if it is possible and politically beneficial to send an application on withdrawal from the agreement on Armed Forces to allow Republika Srpska to exit the deal," Dodik said.

Igor Gajic, a political analyst from Banja Luka, told Sputnik that in spite of NATO's rhetoric there won't be any consequences for the Bosnian Serb soldiers taking part in the parade, and said they could quite easily form their own army.

The army of Bosnia and Hercegovina is made up of three regiments, "one for each nation," and if necessary Republika Srpska could pull its soldiers out of that arrangement and form an army on the basis of its regiment, Gajic said.

Petar Kunic, Dean of the Law Faculty of Banja Luka University, told Sputnik that there is no reason why the soldiers shouldn't take part in the parade; furthermore, they have done so before.

"Mladen Ivanic, a member of the Presidency of Bosnia and Hercegovina and a supreme commander, is taking part in the celebrations. He ordered the parade, and nobody could forbid him from doing so. Muslim units of the Bosnia and Hercegovina army regularly hold prayers, and nobody is bothered about that. So why can't this regiment participate in the celebrations in Banja Luka," he asked.