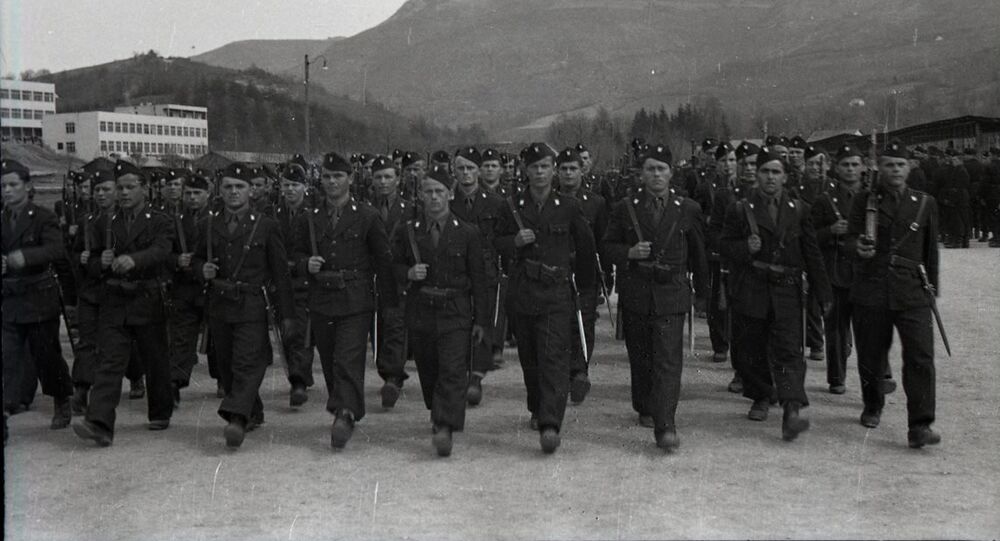 © Sputnik / Alexey Kudenko
Croatia's Ex-President Slams Western Leaders for Disregarding V-Day
President of Croatia Kolinda Grabar Katarovic on Thursday laid a wreath and candles at monuments devoted to the memory of Croatian pro-Nazi collaborators who were killed by the victorious communist Partisans at the end of World War Two in the area around Bleiburg, in Austria.

"The end of the Second World War and the victory over fascism, to which the Croatian people gave a great contribution, signaled the beginning of one of the most tragic chapters in Croatian history. In just a few postwar months the majority of captured soldiers and civilians were killed, or died from torture and exhaustion," said the president's office in a statement marking the visit to sites in Bleiburg, and in Macelj and Tezno.

© AFP 2020 / LIONEL BONAVENTURE
Croatians Fight Side-by-Side With Kiev Forces in Eastern Ukraine
"Their exact number is to this day unconfirmed, because the victims perished in more than one hundred different places, on the territory of several countries, without legal process or a decent burial," the statement continued.

The historical details of the killings at Bleiburg are disputed by historians, who disagree over the number of victims, and whether civilians were among them.

The private visit to Bleiburg is a repeat of the private visit the president made to the site of the Jasenovac concentration camp on April 22, three days ahead of the official commemoration dedicated to the victims of the Independent State of Croatia [NDH] who died at Jasenovac.

The fascist regime, whose members were also called the Ustashe, ruled over Croatia and parts of modern day Bosnia during the Second World War; the exact numbers of Jews, Serbs, Roma and opponents to the fascist regime killed at Jasenovac is unknown, and a subject of historical controversy.

The early visit to Bleiburg represents a change to the president's plans, since last month Grabar-Katarovic  said that she intended to go to the official commemoration, held at Bleiburg this Saturday.

"Instead of Kolinda Grabar Katarovic, her envoy will be at Bleiburg [on Saturday].

However, after criticism in the media of the plan to visit the Bleiburg commemoration in person, but not to go to Jasenovac, Grabar-Kitarovic decided to be represented at the event by an envoy, instead of her original plan to appear in person. According to the event's organizers, the president had even been intending to give a speech at the commemoration.

"With her [Grabar-Kitarovic's] secret visit to Bleiburg, laying flowers in silence, without media pomp and with an accompanying statement from the president's office, she succeeded in equating Bleiburg with Jasenovac," wrote columnist Tomislav Klauski in the 24Sata newspaper on Friday, criticizing the president's move.

"By repeating exactly the same pattern – 'I won't go to the dedicated commemoration neither at Jasenovac nor at Bleiburg' – and repeating the same messages about 'moral disapproval of a regime which persecuted and killed people,' with the slogan that 'a crime is a crime which cannot be justified by  ideology,' Grabar-Kitarovic went a step further than all her predecessors as head of state or government and managed to give the same treatment to the victims of the Ustashe concentration camp at Jasenovac, and the Ustashe and NDH soldiers [who died] at Bleiburg."

In 2011 Croatian historians Slavko and Ivo Goldstein released a book entitled 'Bleiburg and Jasenovac are not the same,' which they described as "the most well-founded and reliable counter to attempts to equate Jasenovac with Bleiburg," explaining that such relativization, present to a greater or lesser degree in Croatian public life over the past 20 years, is based on "the ignorant conclusion that Jasenovac and Bleiburg are two of the same crimes, committed under different ideologies."