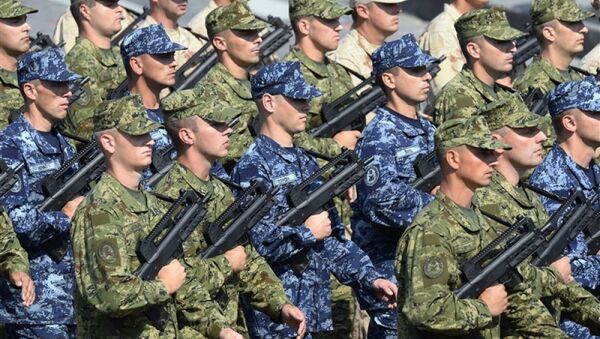 Kiev Using Western Lethal Arms, US War Tactics in Donbas
Croats are fighting in Ukraine but only as part of the government forces and are in no way involved with any of the paramilitary units active in the country’s troubled east, Croatia’s Foreign Minister Vesna Pusic told the journalists in Zagreb on Wednesday.

"As far as I know, there are Croatian soldiers in Ukraine who have joined the Ukrainian army," Pusic said.

She did not specify exactly how many of her compatriots were actually involved in the hostilities though.

Foreign Mercenaries Speaking Different Languages Spotted in Eastern Ukraine
In earlier reports, Croatian media wrote that dozens of Croats had joined the Azov volunteer battalion, with the Croatian News Agency HINA saying that half of the battalion’s members were indeed foreigners.

On Monday, pro-independence fighters claimed there might be some foreign mercenaries among the pro-Ukrainian combatants who have been encircled near the city of Debaltseve between Donetsk and Luhansk as talks in English, Polish, French and Flemish languages had been intercepted.

NATO countries are currently considering providing lethal weapons to Kiev, a move that some European countries, including France and Germany, are opposed to.

The clashes between Kiev and eastern Ukrainian forces intensified in recent weeks, with the warring sides trading blame for numerous shelling attacks in eastern Ukraine. More than 5,000 people died since the start of the military conflict in eastern Ukraine last April, according to the UN.