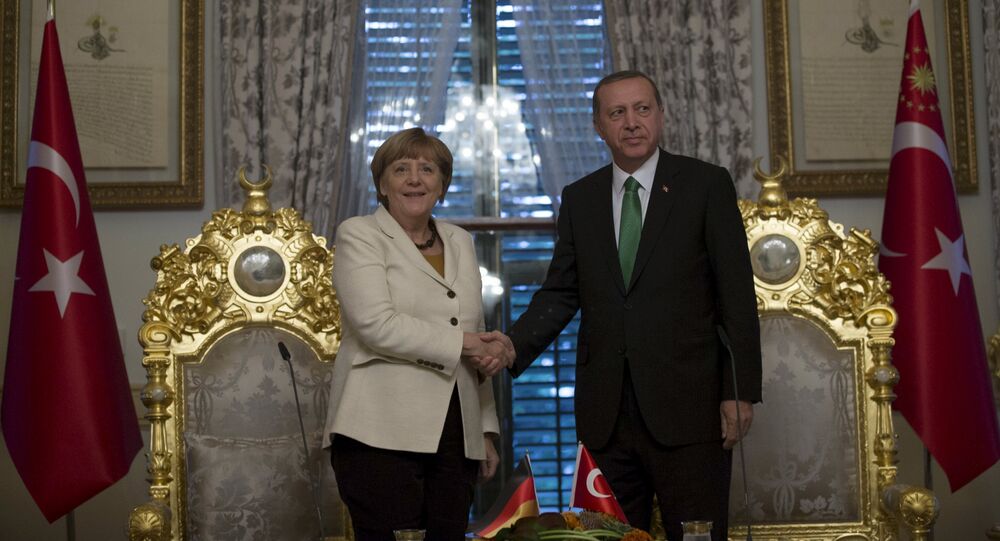 The migrant deal with Turkey enables President Erdogan to exert an unprecedented amount of power over Germany, and to pursue policies in the Middle East which will cause even more refugees to flee the Middle East to Europe, Turkish-born German MP Sevim Dagdelen told Sputnik Deutschland.

© AFP 2021
Merkel's Migrant Policy is 'Danger to Germany,' Former Ally Tells Sputnik
The migrant deal between Ankara and the EU is a cynical attempt to control Europe's borders which is doomed to fail since the Turkish government has itself contributed to the migrant crisis facing the EU, a member of the German Bundestag has alleged.

Sevim Dagdelen, a Turkish-born representative of Die Linke (the Left) party, told Sputnik Deutschland that the war waged by Turkish President Recep Tayyip Erdogan against the Kurds in Turkey and in neighboring Syria and Iraq is a major cause of instability in the region.

"Turkey itself is one of the main reasons for migration, that's why this refugee agreement with Turkey is pure cynicism. Cooperation with Erdogan on this issue is like letting the fox guard the hen house. Erdogan will expand this relentless war which he has already been waging for a whole year against Kurds in south-east Turkey, and in Syria and Iraq. Turkish soldiers are bombing Kurdish People's Protection Units (YPG) in Syria, who are fighting the Islamic State (Daesh), men and women who are bravely fighting gangs of murderers," Dagdelen warned.

The MP told Sputnik that Turkey's recently-launched military operation in Syria aims to force the retreat of Daesh militants further into Syrian territory, which assists Turkey in its campaign against the Kurds. This policy threatens to create more refugees from northern Iraq and Syria, Dagdelen said.

"It is therefore only a matter of time before more people again seek refuge from violence in the EU. Since Erdogan responded to the coup attempt with a counter-coup, tracking hundreds of thousands of people and imprisoning tens of thousands of citizens, the number of Turkish asylum seekers has increased."

© AP Photo / Jens Meyer
While Berlin Burns: Merkel's Advice to Stop Islamization by Playing a Flute on Xmas is 'Too Much'
Dagdelen has recently published a book called "The Erdogan case: How Merkel has sold us to an autocrat." She said that Germany's business interests in Turkey and NATO's desire to use Turkey's Incirlik air base for its Middle Eastern interventions are key reasons why Merkel allowed the country's migration policy to become dependent on Turkey, which has manifested itself in several political decisions.

For example, in April Merkel allowed German comic Jan Boehmermann to be sued by Erdogan under a little-used German law under which Germans can be charged for insulting a foreign head of state.

In June the German Bundestag passed a resolution which recognized the massacre of up to 1.5 million Armenians in 1915 in the Ottoman Empire to be genocide. The Turkish government reacted furiously to the decision, and recalled its Ambassador from Berlin.

Turkey also demanded the German government to distance itself from the resolution, and prevented Germany's Defense Minister and other parliamentarians from visiting Bundeswehr soldiers at the Incirlik air base, in an implied threat to curtail Germany's use of the base.

"In making this migrant deal, Federal Chancellor Angela Merkel has allowed herself to become dependent on President Erdogan and the Turkish government. This has already been clearly demonstrated in several cases: the Boehmermann case, the Armenian resolution, the Incirlik military base. This puts the constitutional rights of Germans under question," Dagdelen said.

© AP Photo / SEBASTIAN CASTAÑEDA, Britta PEDERSEN / AFP dpa
Erdogan Poem Saga Continues Amid Attempts to Reopen Case Against German Comic
Erdogan's domestic policies are mirrored by his foreign policy, which is exerting increasing influence over German public life. The politician declared that recent demonstrations in Germany in support of the President are a reflection of Ankara's power there.

In July, thousands of people in Germany of Turkish origin held demonstrations in German cities in support of President Erdogan, following the failed military coup on July 15.

"Turkey is pursuing a parallel foreign policy. They (the government) have a wide network of parties, lobby organizations and also foreign representatives of the Turkish-Islamic Union, which enable them to try and manipulate the Turkish-speaking population of Europe and the whole world in their interests. I can imagine that in view of recent disorders organized by Erdogan's supporters in Germany, the governing parties fear a larger escalation and are trying to reduce tension."

"However, I think this is the wrong path. It must be made very clear that that kind of thing is not welcome here. Those who are in favor of Erdogan's politics of violence should go and live under Erdogan and his Justice and Development Party regime. They are not welcome in Germany and Europe," the politician said.