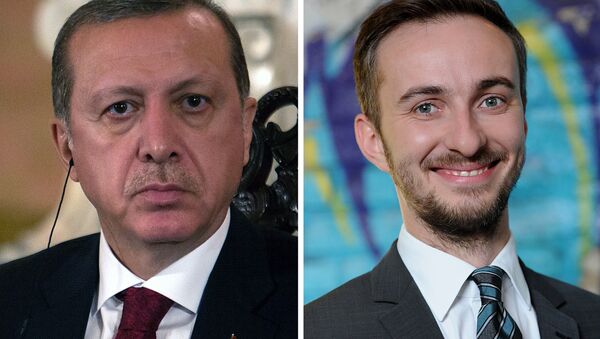 Authorities confirmed that Erdogan's lawyer had filed an application to have the decision overturned, which comes after the Mainz prosecutor's office last week, scrapped the investigation, saying Bohmermann's poem was so exaggerated that it could not be taken seriously.

"There is no evidence that the accused was making a serious attack on the personal or social reputation of the Turkish president," the prosecutor's office concluded.

Sanity sometimes prevails. Germany drops the investigation into Jan #Boehmermann on the grounds of insulting #Turkey's #Erdogan in a poem

​There are fears the latest spat could lead to an increase in tensions between Berlin and Ankara, with relations already under considerable strain, following tense negotiations over the migration crisis and other issues.

Relations between the two countries became increasingly tense in June, when Germany's parliament adopted a motion recognizing the Armenian genocide, something vehemently rejected by Ankara.

​Turkey has also criticized the EU's integrity in regards to upholding its part of the EU-Turkey migration deal, with Ankara in the past accusing Brussels of withholding aid money and not ratifying visa liberalization for Turkish citizens within the bloc.

German prosecutors drop investigation into #Boehmermann for his satirical poem about #Erdogan. Everything else would have been unthinkable!

​Brussels has hit back however, criticizing attacks on Turkish press, while arguing that visa-free travel for Turks will be ratified once Ankara meets a series of requirements, which EU officials say have not been satisfied.

The incident was triggered by a poem recited by comedian Bohmermann on German public broadcaster ZDF in March.

As part of the so-called "defamatory poem," the comedian accused Erdogan of bestiality and paedophilia in a satirical manner.

​While the act was initially meant to be a comical protest against Ankara's decision to summon Germany's ambassador over an earlier satirical skit, the poem was not well received in Turkey, with Erdogan filing a criminal complaint.

The incident also put pressure on German Chancellor Angela Merkel, who in April authorized an investigation into whether Bohmermann could be charged with an obscure 19th century law that protects the violation of a sovereign nation's dignity.

​During a time of tense discussion about the migration crisis and the implementation of the EU-Turkey migration deal, Merkel was urged by Ankara to allow the investigation to continue, while she was also criticized domestically from human rights and free speech campaigners.

While throwing out an investigation to convict Bohmermann, German prosecutors are expected to rule next month on another aspect of Erdogan's original complaint, which has called for any further broadcasts of the poem to be banned.