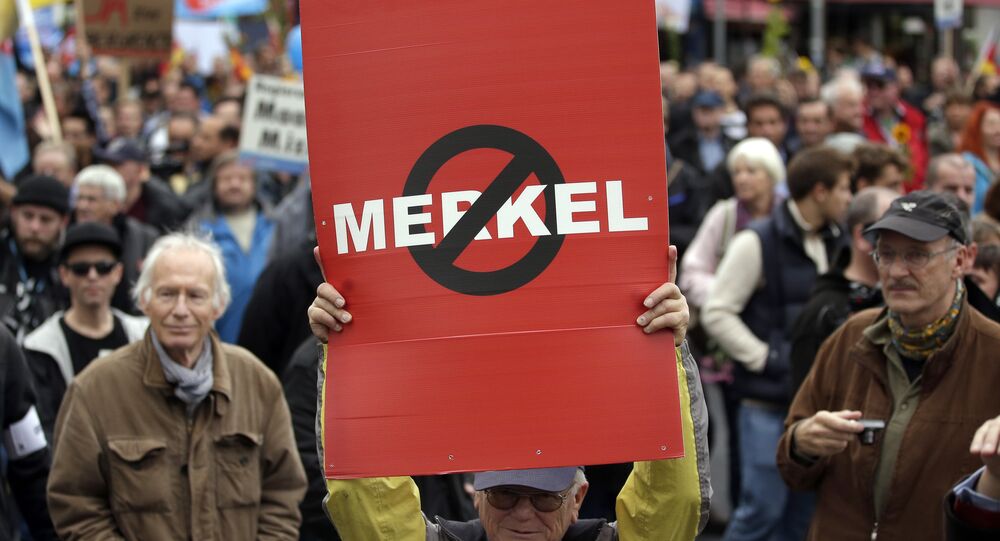 Fallen Angela: Europe Gets Ready for Life Without Merkel

German Chancellor Angela Merkel will celebrate 11 years in power next month, but the likelihood of defeat for her party in next year's elections has shifted everyone's attention to the shape of European politics after her departure.

The defeats raise doubts about the viability of Merkel's candidacy for Chancellor in Germany's federal elections next year. Amid growing speculation, Merkel herself has yet to declare whether she will run for election again.

In Project Syndicate on Thursday, Professor of Economic Policy Ashoka Mody considered the wider implication of Germany's federal elections, whether or not Merkel retains her post as Chancellor.

However, gains by the AfD and other right-wing parties such as the UK's UKIP and France's Front National are proof that European politics are changing, which has implications for European integration and Germany's leading role in the European project.

The professor's hope is that rather than "xenophobia," a changing Europe gives rise to a "responsible nationalism," in which "Eurozone governments will need to serve their citizens rather than some abstract European ideal, and live by the discipline of the ballot box and the market."

Amid stark disagreements over Europe's fiscal rules and the Greek debt crisis, "a German as European Chancellor would only tear Europe further apart," Mody concluded.

Angela Merkel was first elected Chancellor in 2005, and running again might enable her to exceed the record set by her political mentor Helmut Kohl, who governed Germany from 1982 to 1998.

The Federal Republic's longest-serving Chancellor oversaw the reunification of Germany and was instrumental in promoting European integration, giving Germany a key political and economic role at the center of the EU and fostering the Euro single currency project.

In spite of Kohl's ostensible achievements for the European Union project and Germany's position within it, Kohl suffered a humiliating defeat when he ran for office for the final time in 1998, an experience which Merkel is said to be keen to avoid.

© REUTERS / Stefanie Loos
Mistrusted Merkel Remains Reticent Amid Spiraling Party Clout
Opinion polls suggest a majority of Germans are opposed to Merkel staying for a fourth term. According to a survey commission by the Cicero magazine in May, two months after the CDU suffered heavy losses in three state elections, 64 percent of Germans don't want Merkel to remain Chancellor.

So far Merkel remains tight-lipped about her intentions, but she will have to decide her future by the beginning of December at the latest, Germany's Rheinische Post (RP) newspaper wrote last month.

One reason Merkel might run again is the dearth of candidates in the CDU/CSU union to replace her, the newspaper remarked. Possible candidates include Defense Minister Ursula von der Leyen, Chief of the German Chancellery Peter Altmaier and even 74-year-old Finance Minister Wolfgang Schauble.

"Her (Von der Leyen's) position regarding the refugee policy is very similar to those of the Chancellor. If Merkel is perceived as too left-wing for the Union, then she is no alternative. Peter Altmeier is talked about as a possible replacement, but the same applies to the bright lawyer as to Von der Leyen. He is so close to the Chancellor that he doesn't really represent an alternative," RP wrote.

Some have speculated about the possible intention of Horst Seehofer, the leader of the CDU's Bavaria-based sister party CSU, to run for Chancellor.

However, according to German political scientist Oskar Niedermayar, Seehofer doesn't stand a chance of becoming Chancellor.

"Quite apart from the question of whether Seehofer would want to … he has no chance because the (CDU/CSU) union certainly won’t be able to reach a majority at the next federal election. That means it needs a coalition partner, and all conceivable partners would not accept or elect Seehofer as federal Chancellor," Niedermayar told T-Online.