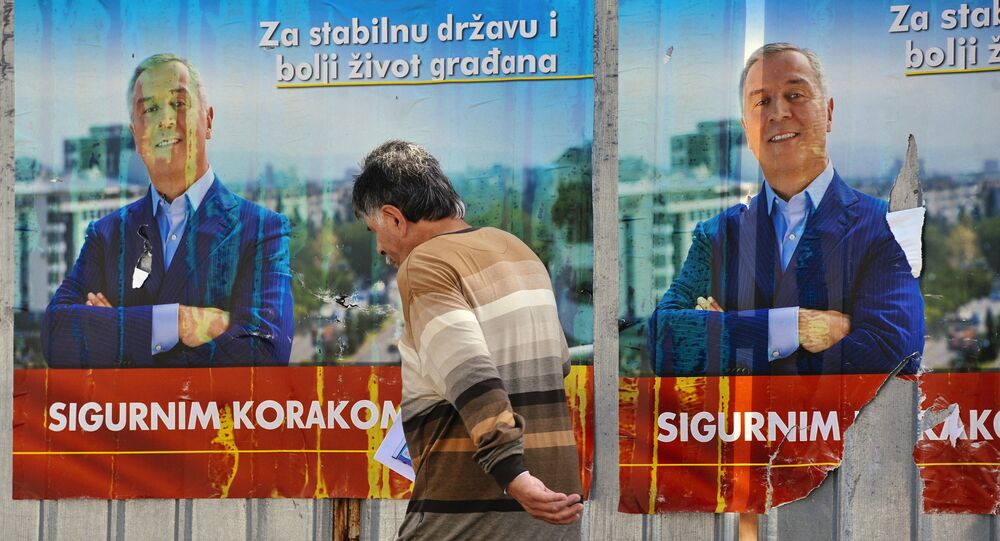 "According to the results of opinion polls Djukanovic's party is going to lose power. However, I am worried that they will try to escape defeat and destabilize the situation in Montenegro. We want everything to happen peacefully, but those losing power are playing on fear and sowing panic to get more votes."

Milo Djukanovic first came to power in 1989 as the secretary of the League of Communists of Montenegro (SKCG). In 1990 the SKCG was reformed as the Democratic Party of Socialists of Montenegro (DPS), and since then the party, with Djukanovic at the helm, has to this day governed the country either independently or in coalition.

© Photo : Wikipedia/CRNAGORAMNE
Montenegro and Russia: Centuries-Old Friends or 'Enemy Territory'?
According to Mandic, Djukanovic owes his longevity to corruption and the falsification of election results.

"Djukanovic has ruled Montenegro for 30 years, but that's not because he won elections. The Organization for Security and Co-operation in Europe (OSCE) and other organizations which monitor elections have demonstrated that the elections were falsified. That is the only explanation why the opposition can't beat Djukanovic. He can't beat us in elections, he is stealing from us, and that's how he manages to get the required number of delegates on the basis of which the government is later elected," Mandic said.

"Other institutions of power are constructed from this falsely appointed parliamentary majority – the judiciary, the prosecutor's office … this chain has to be broken. These elections are a great opportunity for the opposition to finish the job it started about 15 years ago."

The leader of DF is Miodrag Lekic, who was narrowly defeated by incumbent DPS representative Filip Vujanovic when he ran as an independent candidate in presidential elections in 2013. However, the Lekic campaign claimed there were electoral irregularities in connection with around 20,000 invalid ballots and postal votes, which helped Vujanovic to win.

Mandic told Sputnik Serbia that his NSD party, which currently has eight seats in the 81-seat Montenegrin parliament, is hoping to make significant gains in Sunday's elections. He said the DF, which currently has 17 seats, is open to cooperation with any political grouping with similar policies.

© AP Photo / Virginia Mayo
Montenegro PM on NATO Accession: 'Europe Needs to Send Money, Lots of It'
"We have never been better organized to stop this theft, because of which Montenegro is on the wrong path. The path in which the country heads must be supported by the majority of citizens, but for a long time Djukanovic has neither followed the right policies, neither had the support of the majority of citizens."

"He has recognized the false state of Kosovo, but 75 percent of citizens were against it. Almost the same proportion of people was against the decision to impose sanctions against Russia, and there is a similar situation regarding the issue of entering NATO. The DF wants to correct the deviation of power, and we will only pursue policies that have the support of the majority of Montenegrins."

"The fact that the government has followed the policy of joining NATO is the main reason why the international players turned a blind eye to what Djukanovic did during elections. He returned them the favor by implementing the foreign policy objectives that are important to those countries," Mandic said.

During the 1990s conflicts in Yugoslavia Djukanovic's DPS chose to support the Yugoslav government of Slobodan Milosevic, but Djukanovic later distanced himself from Milosevic. Like Djukanovic, Milosevic had been leader of the League of Communists of Serbia. That party reformed itself in 1990 as the Socialist Party of Serbia (SPS), under Milosevic's leadership.

According to a 2011 census, Serbs comprise 29 percent of the population of Montenegro. Following the break-up of Yugoslavia, Montenegro remained in union with Serbia until a 2006 referendum on the issue of independence, in which 55 percent of voters voted for Montenegrin independence.

Montenegro Heads to the Polls | Could Scotland see a Second Referendum?