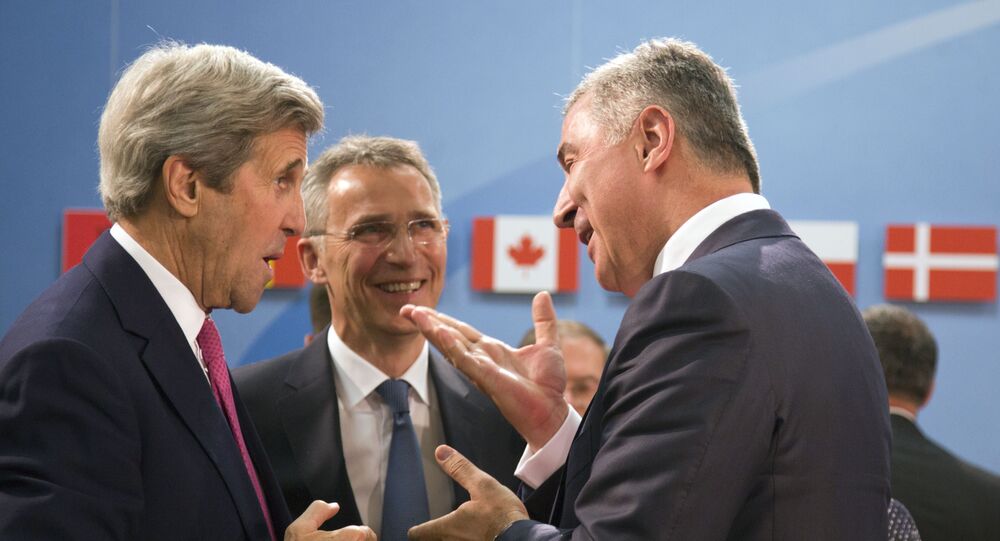 NATO’s open door policy may become one of the important issues on the agenda of the Alliance’s upcoming summit in Warsaw on July 8-9, 2016.

Georgia, Ukraine, Bosnia, Macedonia, Sweden and Finland have all recently tipped to become part of the next wave of NATO enlargement. Will this happen any time soon or will Montenegro’s accession be the last at least until a drastic transformation of the political environment in Europe?

Back in the early 90s, Russia had a strong argument against NATO enlargement that remains relevant to this day. After the Cold War ended, Russian troops were withdrawn from Central Europe and moved over 930 miles from Magdeburg to Smolensk, forming a security corridor between Russia and the NATO member states.

© AFP 2020 / JANEK SKARZYNSKI
US Mayors Blast Obama, NATO: War Games on Russia’s Border Endanger Humanity
Russia’s strategy at the time was based on the legal confirmation of the neutral status of the new Central European democracies, a global partnership with the United States in the sphere of strategic stability and nuclear weapons and building the security system in Europe on the basis of the Organization for Security and Co-operation in Europe (OSCE) mechanisms. NATO's decision to open the doors to countries that were part of this buffer zone would be perceived by Russia as a diplomatic failure and a serious blow to its strategic interests.

The Russian establishment believed that preserving NATO as a relic of the bipolar world despite Russia's multiple concessions would lead to Moscow’s international isolation, suggesting that NATO should follow in the footsteps of the dissolved Warsaw Pact or transform itself into an open political structure, a subordinate of the OSCE as the only pan-European security organization, in which Russia could participate on an equal footing with NATO member states.

However, the further course of history did not conform with Russia’s expectations. NATO chose the path of geopolitical consolidation of the outcome of the Cold War, repeating the classic winners’ mistake – humiliation of the weak, similar to the the division of the Ottoman Empire that led to the World War I, the unjust Treaty of Versailles that paved the shortest way to World War II or military action against Yugoslavia that led to the destabilization of Balkans.

The expansion of NATO as a foregone conclusion was first officially announced by US President Bill Clinton during his January Europe tour in 1994. In July 1997, at the Madrid Summit, the Czech Republic, Poland and Hungary were formally invited to become full-fledged members of the Alliance. The accession of the three former satellites of Moscow was officially formalized on March 12, 1999.

The so-called Vilnius group of NATO-aspiring states, which included the Baltic countries and seven Eastern European states, was formed the following year. On March 29, 2004, seven countries, including the Baltic States, officially became members of the Alliance. Five years later, in 2009, Albania and Croatia also joined the Alliance.

NATO invited Montenegro to join the military bloc in December 2015. It was the Alliance’s first expansion into Eastern Europe in six years. Montenegro accepted the invitation the following day, which triggered protests in the Balkan nation since more than half of the local population according to polls conducted at the time opposed ascension to the military bloc.

In May, the foreign ministers of the NATO member states signed an accession protocol for Montenegro, granting the Balkan country observer status at Alliance meetings. Montenegro will be granted membership to the Alliance once the protocol is ratified by all 28 NATO member states, which is expected to take place by the end of the year.

No Waves Without Wind

Following Montenegro's invitation to join the Alliance, the 13th Secretary General of NATO, Jens Stoltenberg, said that its accession would demonstrate that the NATO's door remains open despite the aggravating tensions and the painful reaction by the Russian side to NATO enlargement.

Why is extensive growth so important to the NATO establishment? Taking into account pure geopolitical thinking considering natural resources as a key to defining strategic interests and describing the international relations as the growing struggle of "each against all," NATO seeks to maintain Western dominance through the physical expansion of its military presence.

This approach explains not only the organization’s constant eastward focus, given the strategic  importance of the territory of Siberia and the Russian Far East, but also speculations about Sweden and Finland’s potential membership, that came into focus after Russia expressed significant interest in exploring the Arctic region, thought to contain enormous untapped resources of oil and gas.

Moreover, NATO acts as a guarantor of the political survival of regimes in the countries joining the Alliance. The expansion increases the manageability and predictability of the local governments that would be difficult to achieve if they retained a neutral status.

The question of the first post-Cold War NATO expansion was closely linked to the conflict in the former Yugoslavia. One of the main incentives that eventually led to the 1999 enlargement was Resolution 781 of the UN Security Council, adopted on October 9, 1992, that established a ban on military flights in Bosnian and Herzegovinian airspace, which required US military deployment in Hungary.

Thus, it can be concluded that NATO is expanding toward regions considered to be potential trouble spots.

Peripheral NATO member states have proven to be main lobbyist for further NATO expansion, fearing that neighboring countries may become gray zones of instability. Thus, Germany was the main lobbyist of the first NATO expansion, Poland lobbied for the ascension of the Baltic States, Hungary for Slovakia and Romania, the Baltic countries are now lobbying for the accession of Ukraine.

© AP Photo
Payback Time: NATO Demands Scandinavia Assumes Defense of the Baltic
Some member states interest in NATO enlargement could also be partially explained by the fact that countries seeking NATO membership are ready to bear higher costs than the current members. For example, when the West was discussing means to reduce the military presence in Afghanistan in 2012, Georgia's foreign minister proposed to increase the country's military presence in the conflict zone.

Besides, a country seeking membership of the Alliance first has to implement multiple reforms to make their armies comply with NATO standards, which creates demand for military equipment manufactured in the NATO founder members.

The issue of NATO enlargement could be viewed through the lens of Parkinson's Law, according to which bureaucracy generates more bureaucracy. From this point of view, every new wave of enlargement is primary motivated by the bureaucratic apparatus' urge to expand.

Finally, amid the crisis experienced by the United Nations, Washington may consider NATO as a potential international mechanism which would be able to substitute the UN in some critical fields, such as crisis management. This goal requires legitimization of the organization in the eyes of the international community, which requires a more extensive range of organization participants.

In 2011, speaking at a meeting with military personnel in the headquarters of Russia's 58th Army in Vladikavkaz, then-President Dmitry Medvedev stressed that the decisive Russian actions in the Caucasus in 2008 prevented a new wave of NATO expansion, that would have reached Russia's borders.

© AFP 2020 / JANEK SKARZYNSKI
Poland Demands That Georgia Explain Its Refusal to Take Part in NATO Drills
In August 2008, Georgia launched a military offensive against the breakaway republics of South Ossetia and Abkhazia. The fighting was stopped when Russian troops moved in from the north in an operation aimed at forcing Tbilisi to end its aggression, after Russia's UN-mandated peacekeepers in the area came under attack.

Georgia's military action to settle the disputes within the country's territory — which effectively is a part of the NATO admission criteria — was preceded by the NATO Bucharest Summit in April 2008 that gave Tbilisi a "historical" promise that Georgia would become a member of the NATO "at a certain moment."

Developments in Ukraine and the Western support for the new government that came to power as the result of what some view as a coup and which set about pursuing a course toward accelerated NATO accession despite opposition from a major section of the local population, demonstrate that the Alliance's course toward aggravating tensions with Russia and undermining international stability is deliberate and will be maintained.