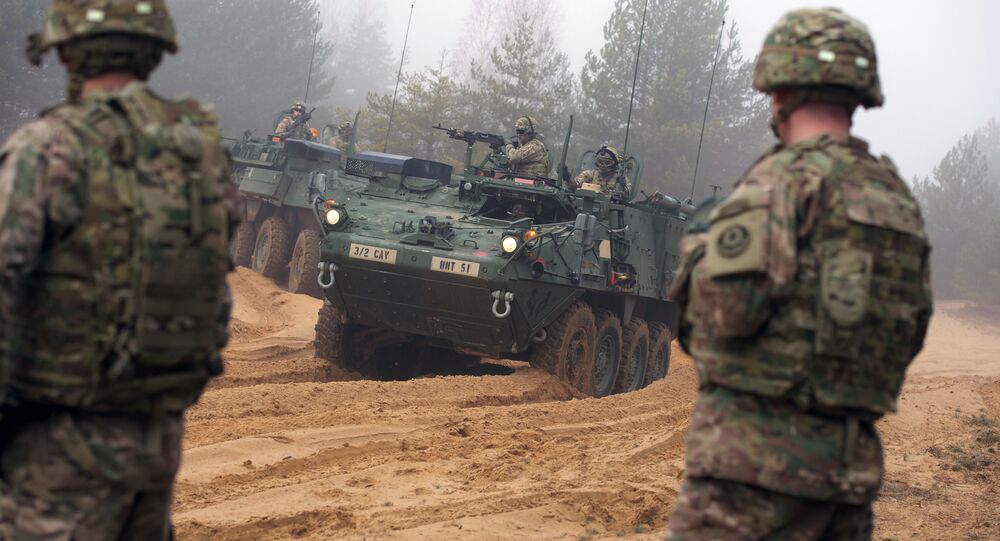 On Wednesday, European Commission President Jean-Claude Juncker delivered his annual State of the Union address where he suggested that the EU needs a military headquarters to work towards a common military force; political scientist Peter Schulze told Radio Sputnik who will be the fiercest opponents to this idea.

© AFP 2020 / Martin Schutt / dpa
EU Defense Union Will be 'Alternative to NATO, Prevent Mass Purchases From US'
Two days prior to the EU Summit being held in Slovakia's capital Bratislava, which will gather 27 EU leaders, minus the UK's Theresa May, European Commission President Jean-Claude Juncker delivered his annual State of the Union address.

Speaking in Strasbourg, he touched on a number of issues, including the need for a single military headquarters within the European Union to work towards a common military force.

"Europe can no longer afford to piggy-back on the military might of others or let France alone defend its honour in Mali," the European Commission president said.

"We have to take responsibility for protecting our interests and the European way of life."

He stressed that lack of military cooperation means EU countries waste between €25 bln ($28bln) and €100 bln ($112bln) per year on separate military missions., even when they happen in the same country or city.

To tackle the problem, the European Commission President proposed the creation of a single headquarters for military operations, a permanent structure which will enable Europe to "act effectively" and to set up a European Defense Fund to "turbo charge" research and innovation in the European defense industry.

Peter Schulze, Professor of political science at the Georg-August-University in Goettingen, Germany explained to Radio Sputnik what obstacle such a unified European military structure will have to overcome.

"There is enormous competition between NATO and the idea of a European army," he told Sputnik.

"The political decision-making power in NATO, namely the US, Washington will do everything possible to hinder the development of an autonomous independent European army structure."

The political scientist also explained that there is a conflict of interests within the EU itself.

There are more than two blocks in the EU, at least three or four blocks, he said, and there is a broad distinction between the ones who want to deepen the integration process and the rest.

The block which advocates the integration is the one between Paris and Berlin and possibly Rome joining this "kind of club" in the future.

Italian Prime Minister Matteo Renzi was invited as the third partner to "this axis or community" between Paris and Berlin.

Other member states are very much reluctant against such a development, the expert noted.

Among such states is the so-called "Trans-Atlantic block": the Baltic States, Poland, Romania, Denmark and Sweden.

© AFP 2020 / PATRICK HERTZOG
EU Defense Proposal Doomed to Fail Due to 'Lack of Autonomy, Dependency on US'
"Britain is out, but this kind of Trans-Atlantic block will do everything to hinder any deepening of the political processes of integration and will be absolutely opposed to the defense and security policy as the common policy of the EU," Schulze said.

"They are putting their security interests solely on NATO. So, we have a kind of cacophony of interests in the EU at the moment."

"So, the EU is a very strange animal at the moment," the expert concluded.

He further said that even though it doesn't mean that the EU is going to be dissolved, all the countries have to come with "a kind of a coherent concept" out of this crisis. There will be "kind of a restructuring of the EU in the future," he said.

However, he said it won't be a European military structure.

"A European army can only be an army which carries two hats on its head," he said.

"This means a NATO hat and the European army hat. The European army would have its own headquarters and general staff and things that belong to this kind of structure," he explained.

However when it comes to military operations, then they would borrow units for operation from NATO and vice versa.

"To have a double structure is too costly and it would fly against the interests of most of the Trans-Atlantic member states especially in Central Europe and Scandinavian area," he explained.

© Flickr / European Parliament
Top EU Bureaucrat Calls for New Military HQ and More Active Role in Syria
Meanwhile the US bases in Europe will remain in place unless the US would voluntarily want to withdraw from Europe.

It won't happen, the expert said, as they are "the insurance for Washington to have an impact, to have a linkage to the European politics and to influence them from within."

The bases, he said, will not do any harm unless there is escalation of the Cold War rhetoric.

However, inter-state war in Europe is "unthinkable", he said, because it will immediately go nuclear and this would mean the end of Europe.

Hence, he stated, US bases on this continent are a lot less dangerous than in other areas of the world.