EU Defense Proposal Doomed to Fail Due to 'Lack of Autonomy, Dependency on US' 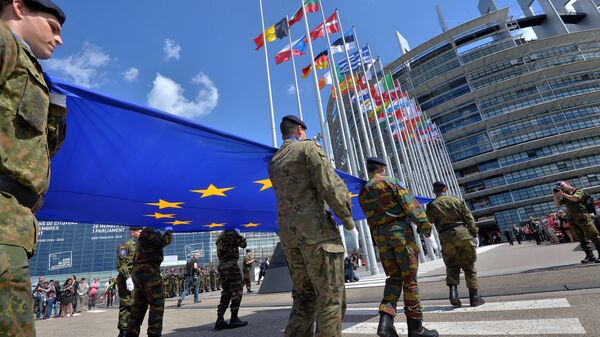 Commenting on the recently-proposed EU Defense Union, borne of a Franco-German initiative, which is set to top the agenda of the upcoming EU Summit in Bratislava, Russian political scientist Dmitry Danilov reviews its potential sustainability and possible value to Russia.

EU Defense Union Will be 'Alternative to NATO, Prevent Mass Purchases From US'
French Defense Minister Jean-Yves Le Drian and his German counterpart Ursula von der Leyen filed a proposal to EU foreign policy chief Federica Mogherini to set up the bloc's collective defense, including a new military HQ and swifter deployment of overseas missions, for "more effective protection of the citizens and borders of Europe."

The initiative is set to decrease Europe's dependency on the US and NATO and to boost the bloc's military might.

The project is set to top the agenda of the EU Summit in Bratislava, which kicks off on Friday, September 16.

Dmitry Danilov, head of the European Security Department at the Institute of Europe of Russia's Academy of Sciences, has reviewed the potential sustainability of the proposed project.

In his interview with the Svobodnaya Pressa (Free Press) news website, the political scientist noted that the proposed initiative "runs parallel" to NATO policies in Europe, hence Europe will be forced to adhere to NATO strategic security directives, which in turn, answer the interests of the US.

It refers not only to any political declarations but to practical cooperation as well.

Paris-Berlin EU Defense Proposal May Be Discussed at Bratislava Summit
"The EU has advocated joint EU-NATO cooperation in such spheres, among others, as cybersecurity and the fight against hybrid threats. Both spheres fall under Article 5, the principle of collective defense of NATO’s founding treaty," the expert said.

"Thus the EU actually loses its strategic independency as it is obliged to act within the strategy of the alliance," Danilov explained.

Even though, he said, those are the same very countries which are NATO member states and potential members of the EU Defense Union, what is meant here is specific differentiation of labor between EU and NATO.

To be able to build up its own defense, Europe should have autonomy. However, it is binded to NATO agreements and therefore unable to set up its own project, the expert explained.

"Europe lacks autonomy and has to align with the policies pursued by NATO. It means that it's forces are guided by the US leadership," he said.

Danilov further said that the current US leadership however is questionable due to its vague security policy at times during the presidential race. He defined this year as "the year of instability and uncertainly" for the US and urged Europe to act on its own.

"On the one hand, Europe has got a chance to make more or less independent decisions," he said.

"On the other, it is still limited in its decisions by external circumstances," he noted, adding that if Europe makes any decisions on its autonomy without agreeing them with the US, there is high risk that such decisions will be extremely problematic.

Brexit Gives Brussels Impetus to Drop NATO and Create Own EU Army
Speaking about what impact the proposed initiative and the processes within NATO could have on Russia, the expert noted that it is not entirely favorable.

"When, back in 1999, Europe was debating on its security and defense policies, its attitude towards Russia was quite positive," he said.

At that time Europe regarded Russia as a political counterweight to the NATO-orientation of Europe.

Russia, in its turn, never regarded Europe from a military point of view, taking into consideration Europe's limited military capabilities and low chances of its military re-orientation towards Russia.

Since then the situation has changed. Judging by the outcome of the NATO Summit in Warsaw there is a feeling, he said, that European security and defense projects have become more intertwined with NATO policies, which are outlined by the US.

The US policies towards Russia can't be called constructive as they are clearly negative, the expert said. This attitude is being projected on the policies of international organizations, such as NATO.

The alliance is being re-oriented for the containment of Russia. Hence the EU is unable to stay clear of the strategy defined by the US.

"If previously we were encouraging common approaches between Russia and the EU in the spheres of security and defense, now it becomes more and more problematic. Largely because the EU has lost its autonomy," the expert finally stated.