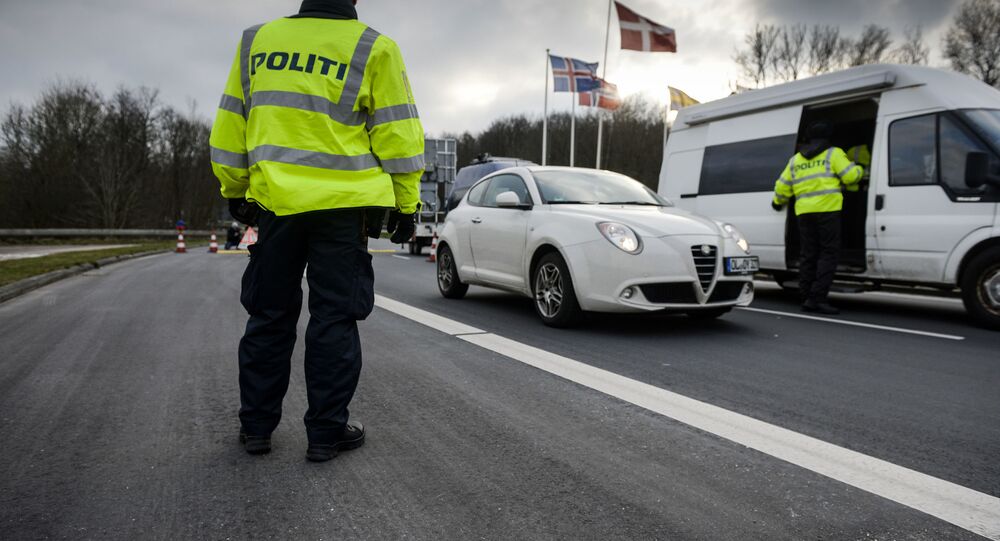 Less than every fifth person brought to court in Copenhagen is Danish, with the overwhelming majority being foreigners, last year's figures from the city police reveal.

Back in 2009, 67.6 percent of the cases brought to courts in Copenhagen involved foreigners, but the percentage rose to 77.8 percent last year. In particular, the proportion of citizens arrested from Romania and Nigeria were exceptionally high.

© Photo : Facebook/ Danskernes Parti
Long Way From Home: Provocative Road Signs Stir Refugee Debate in Denmark
"We are spending increasingly more time on this and we have been forced to earmark resources to specifically target foreign crime," Jørgen Skov, a police inspector of Copenhagen City Police, told Metroxpress newspaper, citing bureaucratic difficulties. When a foreigner commits a crime in Denmark, it takes extra work and resources for the police to administer their case compared to a native Dane committing the same crime, he explained. Copenhagen mayor Frank Jensen of the Social Democratic Party promised that he would be working in close tandem with the police on the problem.

"Foreigners who come to Copenhagen to commit crimes are not welcome in our city. It is a worrying process that I am going to follow in close cooperation with the Copenhagen City Police," he said.

© AFP 2021 / TT NEWS AGENCY / ERLAND VINBERG
In Through the Out Door: Immigrants Entering Sweden via Øresund Tunnel
Gerd Battrup, researcher in cross-border crime at the University of Southern Denmark, blames the present situation on the growing number of migrants, both legitimate and illegal, choosing Denmark as their destination.

"Copenhagen has become a center for crime because this is where people congregate. And with more foreigners flowing in, some of them will turn out to be criminals. At the same time there is much wealth and many tourists around, which could open the door to theft and burglary," he said.

Meanwhile, the figures from the Copenhagen City Police have made the Danish People's Party's spokesman furious. Peter Kofod Poulsen called the numbers ‘insane.'

"The foreigners are clearly over-represented, which is very alarming," he said.

© AFP 2021 / JONATHAN NACKSTRAND
Do the Right Thing: Norway Hopes to Sidestep Emergence of Ethnic Ghettos
Kofod Poulsen believes that massive border controls with thorough checks may keep many of the criminals out.

"I have an expectation that foreigners who are guests in our country behave properly. Therefore, it is the government's duty to launch a crackdown on foreign criminals," he said. Last week, Pind encouraged allowing foreign criminals to serve their sentences in their home countries.

© Flickr / Ian Packer
Double Trouble: Sweden Launches Crackdown on Terrorism Amid Soaring Crime
Last week, the Danish government came up with a plan to deploy the Home Guard at the border with Germany to help the Danish police with border controls. This made the Danish People's Party, which earlier had launched the initiative, overjoyed, but caused warm reactions from other parties as well.

"It is good that the government is finally starting to ponder this solution. The Home Guard could be a great partner for the police," group leader Peter Skaarup Danish People's Party of the told the newspaper Berlingske, Danish Radio reported.

"The Home Guard consists of enthusiastic volunteers with experience from similar control tasks and the idea would be — if this becomes the solution — to accompany and assist the police at the border," Preben Bang Henriksen, spokesman for the Liberal Party, told Jyllands-Posten.

The Danish Home Guard, established after WW2, consists of roughly 15,000 active volunteers and an additional 30,000 reserve troops. In addition to providing support to the Danish Armed Forces, the volunteers also assist in search-and-rescue operations and disaster relief.