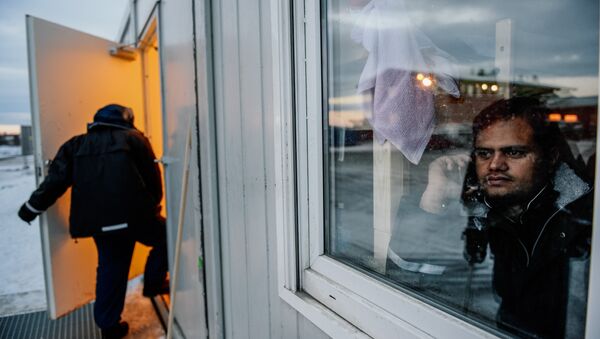 © AFP 2021 / JONATHAN NACKSTRAND
Subscribe
Norway's integration minister has called for tighter immigration policies in an attempt to prevent the country from becoming like ghetto-plagued Sweden.

Integration Minister Sylvi Listhaug of the conservative-liberal Progress Party (Fremskrittspartiet) used Sweden as an example of how not to handle migrants when speaking about the recent terror attacks in Europe. She went on to present a package of asylum reforms for the Norwegian parliament to discuss, which include tighter rules for family reunification, as well as higher support requirements for immigrants.

"Many of those who have carried out terror attacks in Europe were born and bred in France and Belgium. It shows how important it is to succeed with integration, which is once again to how many come to Norway. Therefore, a tighter immigration policy is important," Listhaug said, as quoted by the Norwegian newspaper Dagbladet.

Recently, Norway launched a debate on so-called ‘parallel societies' and ethnic neighborhoods where even the police don't dare to tread, a problem which drew even more attention in the aftermath of the Brussels attacks. Listhaug acknowledged that the problem exists.

"We have foreign fighters who have left Norway, as well as radical environments. We should not stick our heads in the sand and say that everything is alright. Fortunately, we are a still long way from what we see in some other countries, for example Sweden," she told the Norwegian News Agency NTB.

Love Will Tear Us Apart: Sweden to Review Procedures for Married Children
According to Listhaug, the major reason why Norway does not have the same ghetto problems as its Nordic neighbor is that asylum seekers in Norway cannot decide for themselves where they should and should not live.

Sweden Launches Arabic Talk-Show Due to Popular Demand
According to Sweden's Security Police SÄPO, approximately 300 Swedes are believed to have travelled to Syria or Iraq to fight in the past three years, and a large number of cases haven't surfaced yet. Around 40 are believed to have died in combat, whereas around 125 supposedly remain in the Middle East.

Despite the measures being taken, Sweden is still struggling to cope with the record high 163,000 asylum requests it received last year, and experiencing increasingly violent clashes between various ethnic communities in troubled suburbs in its big cities, such as Stockholm, Gothenburg and particularly Malmö, where the share of inhabitants from a non-Swedish background rose above 50 percent as early as 2014. First and second-generation immigrants tend to settle down in uneasy enclaves where ethnic Swedes rarely live. Particularly notorious enclaves, such as Stockholm's Rinkeby or Malmö's Rosengård, are known to function as a breeding ground for violent ethnic crime and extremism.