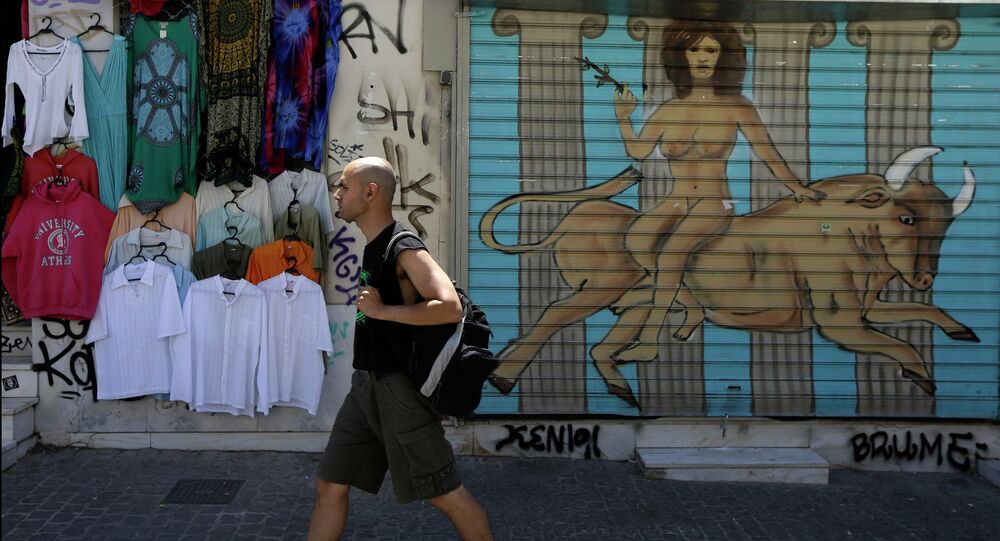 The West often plays the “Russian aggression card” to justify its rising military expenses and budget allocations for the military needs; Europe, which is ruled by puppets who stooge for those in power, thus is simply losing huge contracts with Russia, which meanwhile makes multi-billion deals with the East, according to the Czech lawyer.

© AP Photo / Mindaugas Kulbis
US Army Chief Insists on More Troops, Arms to Europe to ‘Cope With Russia’
If you want to know what lies ahead, you should first of all question what triggered the collapse of ancient civilizations, well-known Czech lawyer Miroslava Hustáková said in an interview with ParlamentníListy.cz website.

It is very simple, she explained, they often breach one of the fundamental principles of the harmonious development of mankind: they harm others in the rush to acquire more than they actually need and the management of these excesses gives rise to bureaucracy, which, in its turn, hinders the further development of the society.

The same very thing, she says, is happening now in the European Union.

The EU is ruled by puppets who stand in for those actually in power. The union will eventually collapse, she says, but the Czech Republic has all the chances to develop independently after the breakup, unlike some other Eastern European countries.

© AP Photo /
US, UK Intentionally Divided Russia and Europe to ‘Eliminate Rivalry’ - Italian Media
“Poland, Romania, Hungary and Bulgaria have chosen a different path. NATO bases which they hosted in their countries, will not allow their independent development even after the breakup of the EU. Germany has not yet decided what it will choose”.

The rest of the world, Hustáková is sure, is much better placed economically. Czech media has ignored a three-day summit of the leaders of the BRICS and other countries in the Russian city of Ufa, which brought another huge investment not only in the BRICS, but tend to involve other countries.

BRICS bank is set to give the first loan next spring. Thailand is set to invest up to $600 million in agriculture in Russia’s Bashkir Republic. India signed another agreement with Rosneft for oil supplies while another big investment comes from China.

Pakistan and India have applied to join the Shanghai Cooperation Organization.

Czech media, however, has made their citizens believe that the EU is the navel of the world, but unfortunately it is not. For a long while the world has been going in a different direction, all the eastern countries are working with Russia, while the EU is only one which still listens to the US.

“The world is continually developing, but all we think about is what sanctions to put on Russia so that we could grant deals with Russia to someone else.”

“If you want the military-industrial complex to take from the state budget as much as possible, you must explain why. Therefore, it is always necessary to create an enemy. Russia has been a nuclear power under Yeltsin, at a time when there was total injustice, a ruined army, and nobody feared that some demented general would start a war on Europe.”

© AP Photo / Virginia Mayo
EU Hushes Up Anti-Russia Sanctions Cost Europe Millions of Jobs - Moscow
She also cited as an example NATO ignoring the conference on peace and security, organized by Russia, which was attended by a lot of defense ministers from around the world.

“Do you believe that the security can be ensured by not communicating with a partner whom you publicly call an enemy?”

“Who paid for Kiev's Maidan is already clear to anyone who wanted to learn the truth. Even those who protested in Maidan, complained that they were not paid for some days,” she said.

The lawyer also stressed that Russia will continue increasing its military potential, but not because it wants to, but because it is being surrounded by NATO.

US Defense Secretary to Discuss 'Challenges From Russia' in Europe