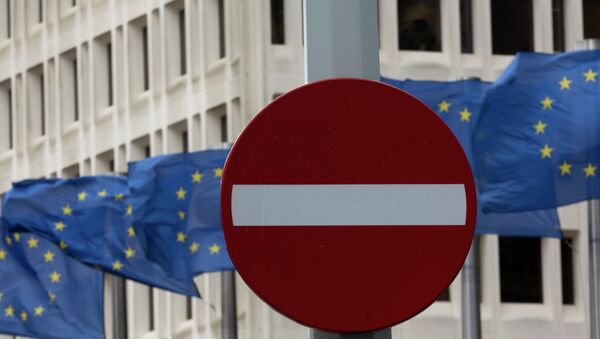 © AP Photo / Virginia Mayo
Subscribe
International
India
Africa
Brussels hushes up the fact that sanctions could cost hundreds of thousands, or even millions of Europeans their jobs, the Russian Foreign Ministry said Monday.

Kremlin Slams 'Illegal' Extension of EU Sanctions on Russia, Vows Response
MOSCOW (Sputnik) — Russian Foreign Ministry said in a statement that Moscow was "deeply disappointed" over the EU sanctions' extension, noting that the "Russophobic lobby has prevailed" in Brussels.

The European Union decided to extend sanctions against Russia until January 31, 2016 earlier on Monday.

“We are deeply disappointed that once again, the opinion of the Russophobic lobby has prevailed, pushing through the decision to extend illegal restrictions. At the same time, Brussels deliberately hushes up that this is guaranteed to be followed by hundreds of thousands of Europeans, or millions, according to some estimates, losing their jobs,” the ministry said in a statement.

Anti-Russian Sanctions Can Cost EU Up to $114 Billion - Austrian Study
A study conducted by the Austrian Institute of Economic Research released last Friday projected that anti-Russia sanctions could affect over 2 million jobs in the European Union.

Commenting on the decision made by the EU, Kremlin spokesman said earlier Monday that Russia would respond "in kind" to the sanctions against Moscow by extending restrictive measures against Brussels.

In its statement, the Russian Foreign Ministry noted the "absurdity" of the EU continuing to shift responsibility for the implementation of the Minsk ceasefire agreement to Moscow. Kiev holds the key to settling Ukraine’s internal crisis, but is in no rush to fulfill its obligations, the Russian ministry emphasized.

Russian Prime Minister Dmitry Medvedev called on his chief of staff to prepare a set of retaliatory measures following the decision by the EU.