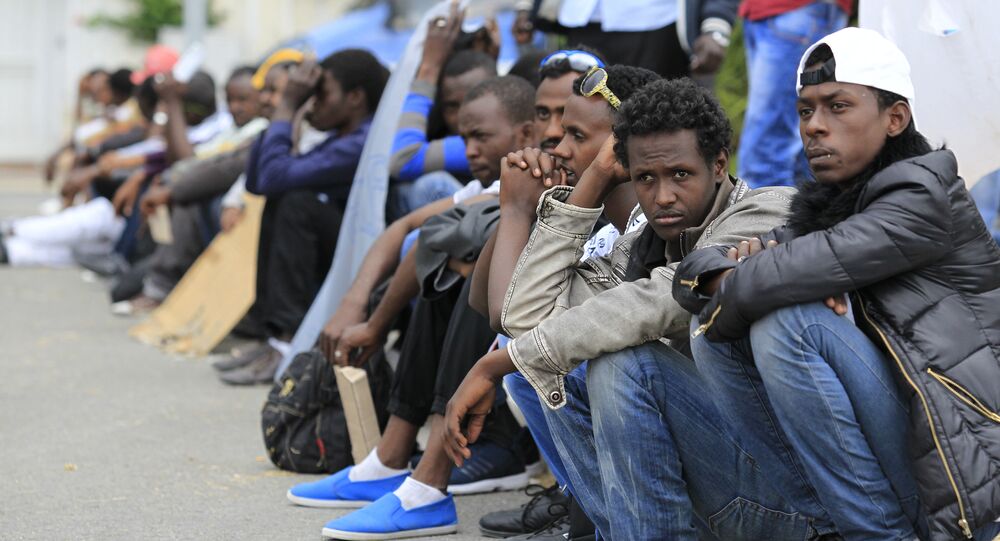 Czech officials will present a proposal on intake hundreds of migrants to the country from refugee camps in Africa and Middle East at an EU leadership summit which will take place in Brussels in the end of June.

© AFP 2021 / VLADIMIR SIMICEK
Slovak Anti-Immigration Protesters Tear Up EU Flag at Bratislava Rally
PRAGUE (Sputnik) — The Czech Republic is ready to take in hundreds of migrants, both those waiting in refugee camps in Africa and the Middle East as well as those who made their way to South European countries, but wants to decide on the intake on its own, the public broadcaster Czech Radio (CRo) reported Wednesday, citing official documents.

According to media reports, Czech Prime Minister Bohuslav Sobotka will present a proposal on migrant intake at an EU leadership summit scheduled to take place in Brussels on June 25-26.

“The Czech Republic is ready to accept, on a voluntary basis, several hundreds of migrants, including those currently staying in the countries of southern Europe and from refugee camps in Africa and the Middle East,” the documents read.

© AP Photo / Binsar Bakkara
Wake Up, EU: Migrant Quotas 'May Bring ISIL Militants' to Europe
According to the documents, the Czech government is willing to implement its own program of migrant reallocation based on bilateral cooperation with specific EU member states, most affected by the growing influx of migrants, such as Italy and Greece.

At the same time, Czech authorities will reiterate their opposition to the European Commission’s plan to mandatory redistribute migrants arriving to Southern Europe.

On Saturday, Sobotka said that Prague wants the Czech government, and not the European Commission, to be the authority to make the final decision on whom to admit.

© AFP 2021 / PHILIPPE HUGUEN
More Illegal Migrants in UK, Problem Not Solved
Later this week, during the Brussels summit, the heads of EU member state will discuss ways to deal with the current migrant crisis.

The European Commission proposed to redistribute migrants among all the EU member states based a system of quotas that would take into account a country’s gross domestic product, population, unemployment rate and the existing number of documented migrants. According to these quotas, the Czech Republic would have to accept 1,328 refugees.

EU to Distribute 40,000 Migrants on Voluntary Basis by Late July