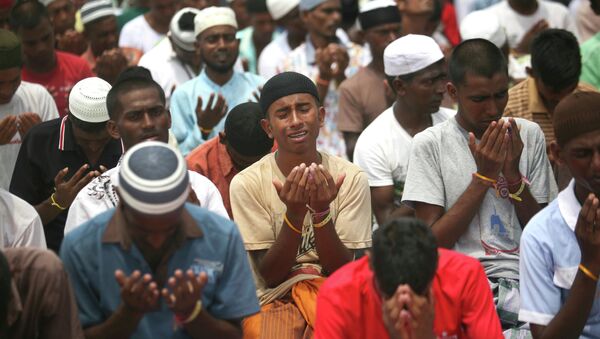 Introduction of national quotas for resettlement of migrants, who have arrived to the EU from Africa, may cause further islamization of Europe, leader of Stop Islamisation of Europe (SIOE) group Anders Gravers told Sputnik on Monday.

EU Prepares 5 Ships, 2 Subs for Anti-Smuggler Mission in Mediterranean
MOSCOW (Sputnik), Anastasia Levchenko — The problem of Islamization in Europe can be exacerbated if the European Union agrees on compulsory quotas, as Islamists may be smuggled to the region together with migrants.

Brussels is considering the introduction of national quotas for migrant resettlement for those who have arrived in Europe from Africa crossing the Mediterranean Sea. The newcomers are predominantly Muslims.

"The main problem for us is ISIL [Islamic State] people who are smuggled into Europe among these illegal immigrants… All Muslim immigration to Europe should be stopped, EU countries have to agree about it through a democratic process," Anders Gravers said, adding that the quota system can only aggravate a problem which is already acute.

Gravers stressed that the only way to convince politicians of the urgent necessity of stopping Europe’s Islamization is through the concerted efforts of public activists.

"I think that people will start to wake up in different countries, and in the end politicians will have to listen to what these people say," Gravers said.

There is no single approach to the compulsory quota system inside the European Union. Slovakia, the Czech Republic, Hungary and Poland jointly oppose the proposal of the European Commission to resettle over the next two years around 40,000 of asylum seekers.

The issue will be further discussed at an EU summit on June 25-26.