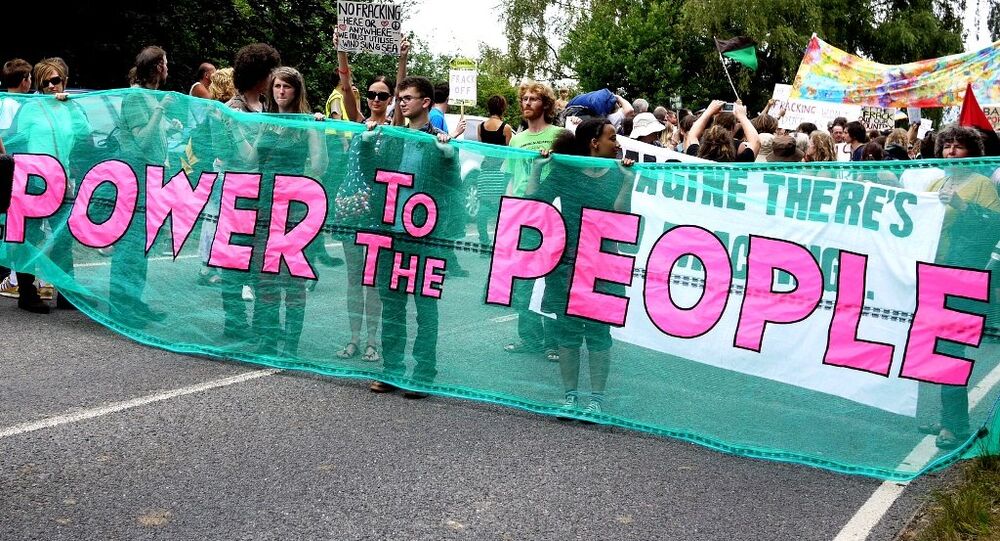 Anti-fracking activists in the UK have urged councilors in England's north not to bow to the pressure of oil and gas lobbies, and consider the potential environmental and health impacts of the controversial practice, with officials to meet today to discuss plans to frack for shale gas.

Councilors from Lancashire in England's north-west are weighing up applications from energy company Cuadrilla, who hope to explore for shale gas at two new sites in the region.

There has been widespread public opposition to fracking, based on a combination of fears that the practice will have a detrimental impact on the both the environment and the health of residents living close to drilling sites.

Despite the protests and sustainability concerns, planning officials from Lancashire Council earlier this month recommended that one of the sites — at Preston New Road, near Little Plumpton — be approved for testing, as long as a range of conditions on work hours and noise pollution are met.

The council will have a final say on Cuadrilla's exploration application, which is expected to be made within the next few days.

A green light for the applications would allow the company to undertake test fracking at the site, however a separate application would need to be lodged if Cuadrilla wanted to pursue commercial fracking.

Listen to the People

While the UK government has strongly supported and promoted the benefits of drilling for shale gas, there has been widespread public opposition towards the proposals, with a number of demonstrations taking place across the country protesting against fracking plans.

Residents lining up outside county hall with yellow tape to stand in solidarity with @frackfreelancs #DontFrackLancs pic.twitter.com/jIME0XP4oT

Furqan Naeem, spokesperson from environmental activist group Friends of the Earth, said opposing fracking was one of his group's "priority campaigns" as "people generally don't want it".

He said that giving Cuadrilla permission to search for shale gas would "set a precedent" for the country.

"They will not only drill holes in Lancashire, they will do it all over the UK," he said, adding that "the council must now listen to the tens of thousands of people who have objected to fracking."

Urging councilors to look after the interests of local residents in Lancashire, Mr Naeem said:

"Fracking could have a hugely damaging impact on Lancashire residents and their environment and cause more climate-changing pollution to be pumped into the atmosphere.

"Councilors must put local communities first, follow the example of Scotland and Wales and say no to dirty fracking."

Supporters Say It Could Be a 'Winner'

Despite the opposition, there has been some support for fracking within the local community, with a coalition of local businesses, academics, farmers and students arguing that rejecting plans for test fracking would send a message that Lancashire was not open to business and investment.

Steve Pye, a former chairman of the Blackpool and Fylde and Wyre branch of the Federation of Small Businesses, backed Cuadrilla's plans, saying a rejection of the application would be a missed opportunity for the region.

"As long as they (Cuadrilla) follow the rules and the guidelines, as long as it safe, it is a winner for Lancashire."

While the debate over the possible benefits and impacts of fracking continues, concerns have been raised over the state of environmental regulations in the UK.

Fracking was found to have been the "most likely" cause of small earthquakes in the Blackpool area in 2011, which led a moratorium on the practice, however fears still remain that there are not enough safeguards in place to protect people and the environment from the impacts of drilling for shale gas.

Oil and gas engineer Mike Hill, who has campaigned for greater regulations to be introduced, believes more testing needs to be done in order to reduce the impacts of fracking on local communities in the UK, telling Sputnik that "the environmental conditions are fantastically under-regulated."