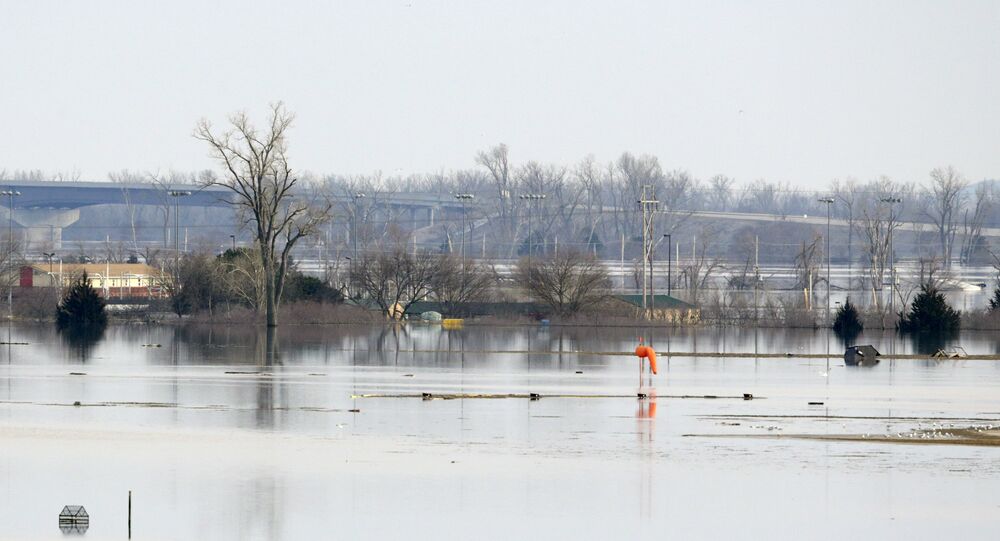 As heavy rainfall hit the US Midwest last week, one-third of Offutt Air Force Base, near Omaha, Nebraska, and home to US Strategic Command, found itself submerged underwater.

According to Offutt Tech. Sgt. Rachelle Blake, around 60 buildings on the south end of the base, including the 55th Wing headquarters and two aircraft maintenance hangars, were flooded over the weekend by as much as eight feet of water. The 55th Wing is a US Air Force unit assigned to Air Combat Command.

"Like large portions of Nebraska, Offutt personnel are battling flood waters which started to creep onto the installation March 15," the Offutt Air Force Base wrote on its Facebook page Sunday.

"An increase in water levels upstream due to a record-setting snowfall this winter, in addition to a huge drop in air pressure earlier in the week, has overwhelmed the southeastern side of the base with water from the Missouri River and Papio Creek. Base officials evacuated the Base Lake early Friday, and personnel worked around the clock to fortify facilities with more than 235,000 sandbags and 460 flood barriers to minimize damage as much as possible," the statement adds.

According to the statement, the base's STRATCOM gate, which is the main control entry for the Air Force Base, has also been closed for an indeterminate amount of time.

"Until further notice, base is mission essential personnel only," the official Offutt Twitter page announced Sunday.

​In addition, the base's runway has been shut down until 1 p.m. Tuesday, the US Federal Aviation Administration announced. Some aircraft on the base, including RC-135s, were evacuated to other, unspecified locations this weekend. The Strategic Command's headquarters, as well as the command's new $1.3 billion headquarters which will open in the spring, have not been damaged by the flooding, according to multiple reports.

"Water is rising at a rapid rate on the SE [Southeast] side of the base. Water is entering from the river and through the storm drains," 55th Wing Commander Michael Manion wrote on his Facebook page Saturday afternoon. "Several buildings including the Wing Building are inundated with water. We continue to work as rapidly as possible to improve water defenses around critical infrastructure. Team Offutt is doing an incredible job — working together but Mother Nature is moving fast."