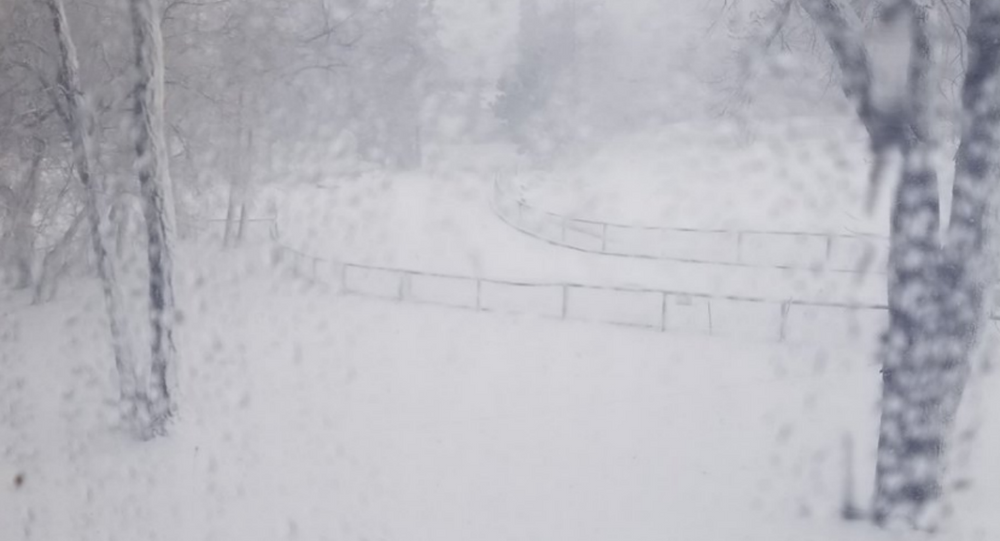 The National Weather Service (NWS) has issued high wind and winter storm advisories from Wednesday to Friday through the central Rockies, across the Plains into the Mississippi Valley and into the upper Great Lakes.

​The intense winter storm, called a "bomb cyclone," occurs through a process known as bombogenesis.

​According to the National Ocean Service, bombogenesis occurs when a "midlatitude cyclone rapidly intensifies, dropping at least 24 millibars [a measure of atmospheric pressure] over 24 hours." A cyclone is a term for a storm system whose winds rotate around a center of low atmospheric pressure.

​"This can happen when a cold air mass collides with a warm air mass, such as air over warm ocean waters. The formation of this rapidly strengthening weather system is a process called bombogenesis, which creates what is known as a bomb cyclone," the National Ocean Service adds on its website.

​"That's where the word 'bomb' comes in," Jeff Weber, a climatologist at the University Corporation for Atmospheric Research, told NPR. "We call storms that drop 24 millibars in 24 hours a bomb, a bombogenesis, the beginning of a cyclone."

​Blizzard and winter storm warnings have been issued in parts of Colorado, Wyoming, Nebraska and South Dakota.

By Wednesday morning, some roads in the northeastern portion of Nebraska were already flooded.

"Do not drive cars through areas where water covers the road. The water depth may be too great to allow your vehicle to pass safely. Turn around… don't drown!" the NWS cautioned in a Wednesday flood warning.

The NWS also issued a blizzard warning for the Front Range, a mountain range of the Southern Rocky Mountains in Colorado, and into northeastern Colorado on Monday. The southern part of the state as well as the Western Slope are currently under winter storm warnings, as meteorologists predict that the storm will result in dangerous conditions.

"This is going to be one of the lower systems, lower in terms of pressure, that we've seen here in Colorado in a very long time, if not ever," meteorologist Kari Bowen told Colorado Public Radio. "It's going just contribute to the intensification of what we're going to expect in terms of wind and snow."

On Wednesday, South Dakota's governor also ordered the closure of state government offices in 39 central and western counties due to winter conditions.

​Wind gusts of 50 to 70 mph are also expected to move through Colorado, New Mexico, Texas and Oklahoma this week, according to the NWS.

​More than 1,700 flights within the US had been canceled by Wednesday afternoon, FlightAware.com. Most of the cancellations were of flights leaving or heading to Denver International Airport.

Around the same time last year, more than 3,600 flights in the US were canceled after a bomb cyclone spread across the northeastern region of the country.

US Blizzard Impedes Travel, Cuts Power to Hundreds of Thousands in Midwest