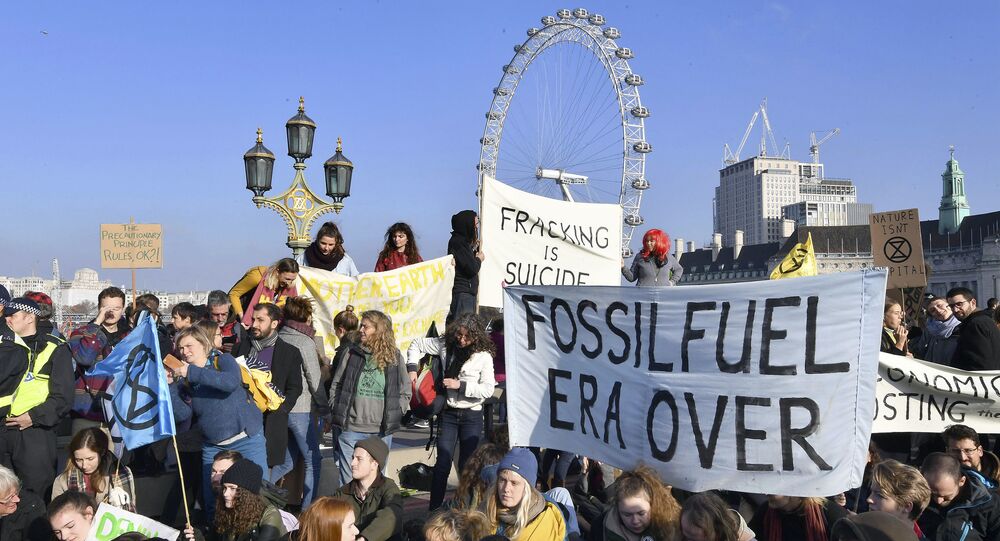 In a significant act of peaceful civil disobedience, over 70 have reportedly been arrested on Saturday as an estimated 6000 ‘climate rebellion’ protesters closed the five main river bridges over the Thames in London.

By noon, all major river crossings had been blocked in what media outlets described as one of the largest "acts of peaceful civil disobedience in the UK in decades," according to a Guardian report.

Many protesters locked themselves to each other as others linked arms and sang. At approximately 2pm the peaceful march moved away from Southwark Bridge toward Blackfriars Bridge, even as plans were laid to move west to the fabled 18th-century Westminster Bridge.

As a runup to Saturday's march, climate rebellion protesters throughout the week glued their hands to the walls of government buildings in London and blocked several major roadways, according to reports.

Organizers of the Saturday march, a nascent environmental group calling themselves Extinction Rebellion is — according to a statement — seeking to use nonviolent protest to force policymakers and government institutions to accept that climate change is an existential crisis and an extinction threat, according to the Guardian.

"The ‘social contract' has been broken [and] it is therefore not only our right but our moral duty to bypass the government's inaction and flagrant dereliction of duty and to rebel to defend life itself," stated Extinction Rebellion organizer Gail Bradbrook, cited by Common Dreams.

Marchers participating in the event were vocal in their support.

"This moment will be remembered in the history books, when we finally stopped allowing our leaders to take us over the cliff," declared a participant, cited by the Guardian.

"We are at the point where if we don't start acting and acting fast we are just going to wipe out our life support system," Jones stated, adding, "It's fine to think we are a rich country, the sixth biggest economy in the world, but actually we won't do any better than anywhere else because climate change will massively affect us too."

"Conventional politics has failed us — it's even failed me and I'm part of the system — so people have no other choice," she asserted, cited by the Guardian.

Local religious figures attended, including Father Martin Newell, who affirmed: "What brought me here is the climate emergency, the extinction emergency and my faith in God who created all this and whose creation we're destroying and crucifying," cited by the Guardian.

"I'm called as a Christian to protect our neighbor who's being abused," the priest stated.

An interfaith ceremony outside of the famous Westminster Abbey is scheduled at the end of the day.

An Extinction Rebellion manifesto calls for government to reduce carbon emissions to zero by 2025, as well as to provide for the establishment of a ‘citizens assembly' that would inculcate an emergency environment plan of action, along the lines of ‘Plan B' scenarios initiated during World War II.