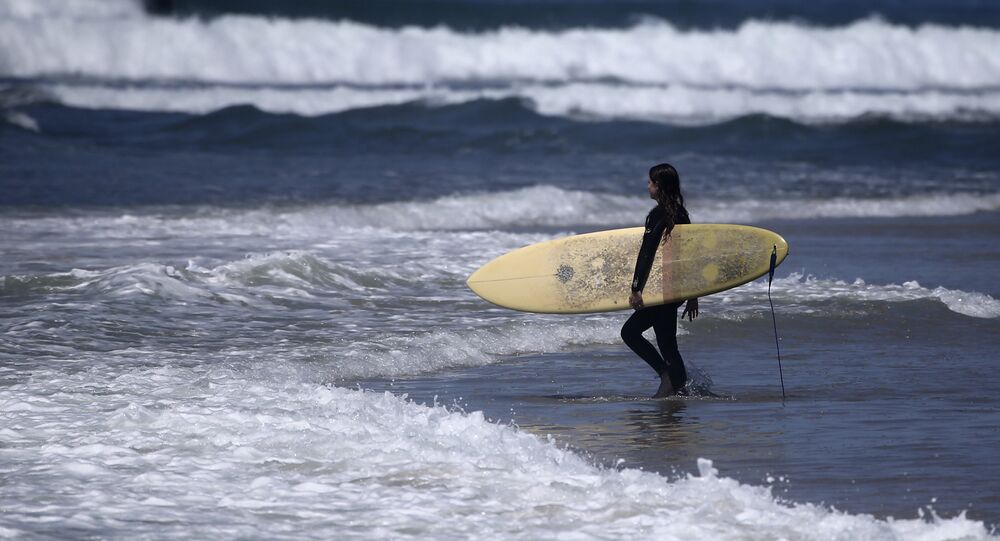 A woman who was bitten on the leg by a shark while swimming in ocean waters off of southern California on Saturday is in the hospital in intensive care and “fighting for her life.”

After being hauled out of the water by bystanders and given first aid, Leeanne Ericson was rushed to Scripps Memorial Hospital in La Jolla, California, where she remains in critical condition, according to reports.

The 35-year-old mother of three had been swimming, along with many others, in the warm waters at a popular family beach near the halfway point between Los Angeles and San Diego.

After Ericson was pulled from the surf, onlooker Thomas Williams, who recently received his EMT certification, quickly applied a tourniquet fashioned from a surfboard leash to stop the bleeding.

"It was definitely to the point [that] her hamstring was gone," said Williams. "If she didn't receive immediate care, it was life-threatening."

"All of the back of her leg was kind of missing," he added, according to the Orange County Register.

A woman who identified herself as Ericson's mother, Christine McKnerney Leidle, was reported by the Los Angeles Times to have started a GoFundMe page to help pay for the extensive medical procedures now required to save Ericson's life and bring her body back to functionality.

Leidle stated that Ericson "is a single mom with three young children who depend on her."

"She has a long road ahead with several surgeries to go. I don't know how much this will cost, but she's going to need all the help she can get. So I am asking for your help with anything that you can spare to help her and her family," the fundraiser web page states.

The shark attack, which happened at 6:24 p.m., resulted in Ericson being bitten along her "glute and down her thigh," according to state park employee Travis Lara, as reported by the Orange County Register.

Ericson was wearing swim fins and wading in shallow water when the attack occurred. The size and exact species of the shark that attacked her is not known, although there have been several other shark sightings in the area recently.

About one year ago, a swimmer was attacked by a shark estimated to have been about 10 feet long while in waters about 32 miles north of San Onofre, suffering bites across her chest, down her hip and on a shoulder.

'There is No Plan': House GOP's New Health Care Proposal Flops on Right