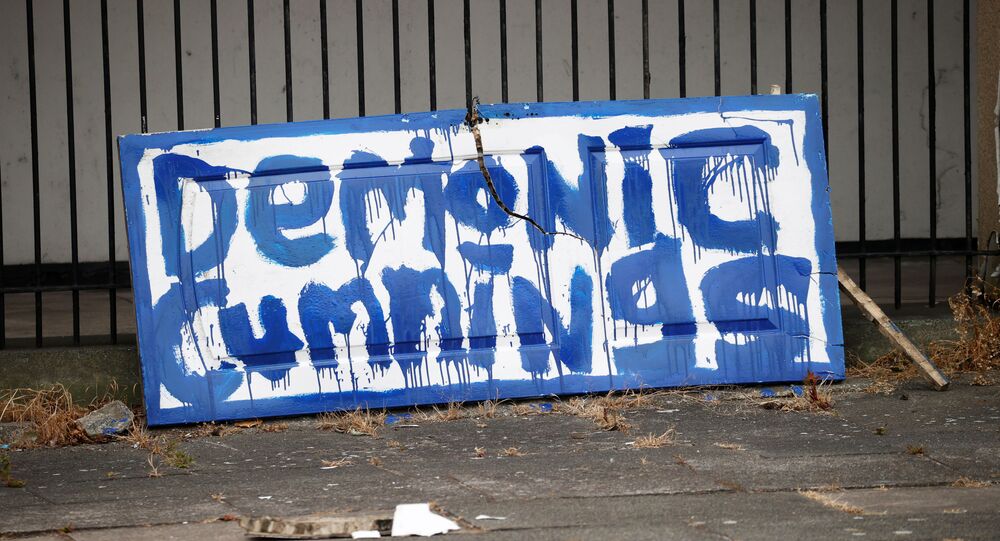 Cummings is a Genius But ...

Dominic Cummings is a genius. Without him we probably wouldn’t have got Brexit, Boris wouldn’t have got his massive majority and I desperately want him to drain the Westminster swamp… BUT what he has done in breaking the lockdown is unforgivable.

There was no sweet smell of roses in the Downing Street Garden yesterday but there was a stench of BS which was only magnified when Boris held his press conference after Cummings interrogation.

Boris proceeded to revert to his usual mumbling bumbling act. Like a visit to your favourite Nana who offers you some chocolate bars from her sideboard to cheer you up, Boris’ offered up a promise that shops would open on June 15.

© REUTERS / POOL
'No Regrets': Dominic Cummings Calls His COVID-19 Lockdown Violation 'Reasonable' Amid Outcry
I don’t know about you, but I want to see my daughter much more than visit a clothes shop.

It was the classic case of the sun will shine tomorrow, tomorrow bet your bottom dollar but you have to question the timing of this relaxation of the lockdown, don’t you?

Is the opening of the shops really led by the science or by the PR machine?

Also, why were Professor Whitty and Sir Patrick Valance in Downing Street ready to do the press conference last night but actually left before Boris took the stage?

Could it possibly be because at last, they, like other scientists on Sage have had enough of the PR spin.

When Boris supported Dominic on Saturday one of these Professors, Stephen Reicher, tweeted ‘I can say that in a few short minutes tonight, Boris Johnson has trashed all the advice we have given on how to build trust and secure adherence to the measures necessary to control Covid-19.’

​Three other scientists on Sage have now agreed with Prof Reicher.

We need to know now what Whitty, Valance and Jenny Harries make of this as a matter of urgency.

I’m not going to re-run the Cummings story apart from saying I don’t think you could do a 4-hour car journey with a poorly 4-year-old without a pit stop at the services.

I don’t think you can drive to Durham and back on one tank of petrol and even if you could no parent allows the fuel gauge to hover over empty when you have your child and sick wife on board, do they?

Also, if your missus is throwing up and you think you’re going down with this virus do you really all get into a confined space like a car and drive all night?

No, you go to bed and see how you are in the morning. That’s common sense and also unfortunately that is also the rules, the rules that Cummings wrote.

Opticians are still not allowed to open because of Lockdown but they may as well stay shut as we don’t need them. Just get in your car and drive to test your eyesight. Mr Magoo should make a comeback pronto!

The interrogation of Cummings was painful to watch and not made easier by the fact that he refused to apologise or admit he was wrong.

Yes, the MSM don’t like him as he is their sworn enemy, and just like Trump the established media in the swamp want to bring him and Boris down. They also want to reverse or derail the democratic decision to leave the EU.

However, and at the risk of upsetting my fellow Brexiteers, I think it is too simplistic to categorise this as simply a ‘remain’ versus ‘leave’ argument.

We are in the midst of a deadly pandemic that has fundamentally changed all of our lives and Cummings may have had a brilliant Brexit and General election but he and Boris are having a dreadful pandemic.

The Government has been pretty inept during this crisis making mistake after mistake but worse they have never ‘fessed’ up to these mistakes. We want sincerity and we need honesty, not spin.  Of course, mistakes would and will be made, we all make mistakes but the secret is to own up to them and learn from them.

It has been a team effort by the whole population of the UK to flatten the curve and save the NHS. It is not any politician’s success it is our collective achievement.

When I was at school I was told by my rugby teacher that there is no ‘I’ in team and I’ve held that value close to me all my life. The problem with the Cummings story and this attempted cover up is that it is all about ‘I’ not ‘We’.

© REUTERS / Toby Melville
‘Hypocrite Aide’ Row: What We Know About Dominic Cummings’ Alleged Breach of Lockdown Rules
Dominic Cummings is a stinking hypocrite just like the bonking Professor, two homes Calderwood and of course Steven Kinnock and all should be condemned. If Cummings really wants to drain the swamp then it’s not a good look to act as if he can ignore his own rules. He must have known this so why did he fire up the Range Rover?

I’ve been saying for ages now that it is no longer about left and right, Remain or Leave, it is about us and them and of course Boris and Cummings convinced us in the election that they were with us against the elite. Perhaps it is now becoming clear that they are also part of the same swamp.

Cummings stated clearly yesterday that at no point during this sorry saga had he offered his resignation and when Gary Gibbons from Channel 4 News asked, “Is it the fact that the PM can’t do his job without you?”  He didn’t answer. His silence spoke volumes.

When Boris was ill it was clear that the cabinet, which Boris chose, froze like a fourth division football team who suddenly find themselves playing at Old Trafford in a third round FA cup fixture.

Cummings should now show some humility and fall on his sword so that we can all get back to fighting this pandemic; this story has already taken up too much of our time and taken our eye off the ball and the prize.

© CC BY 2.0 / Pete Riches / Piers Morgan
'From Hero to Zero': Piers Morgan Claims Boris Johnson 'Done' in Tense Row Over 'Hypocrite' Cummings
Boris seems hell bent on relaxing the lockdown and getting the economy moving again even though the R is still hovering around 1 and that worries the hell out of me.

Boris now needs the scientists firmly on board and the rest of us in the team need to know that he is truly following the science, not chasing the news agenda.

Boris we are all on the same side and we all want to win but you must explain the tactics, make sure you have the support of the kit room (the scientists) and be a team player.

Give your star player the red card now!