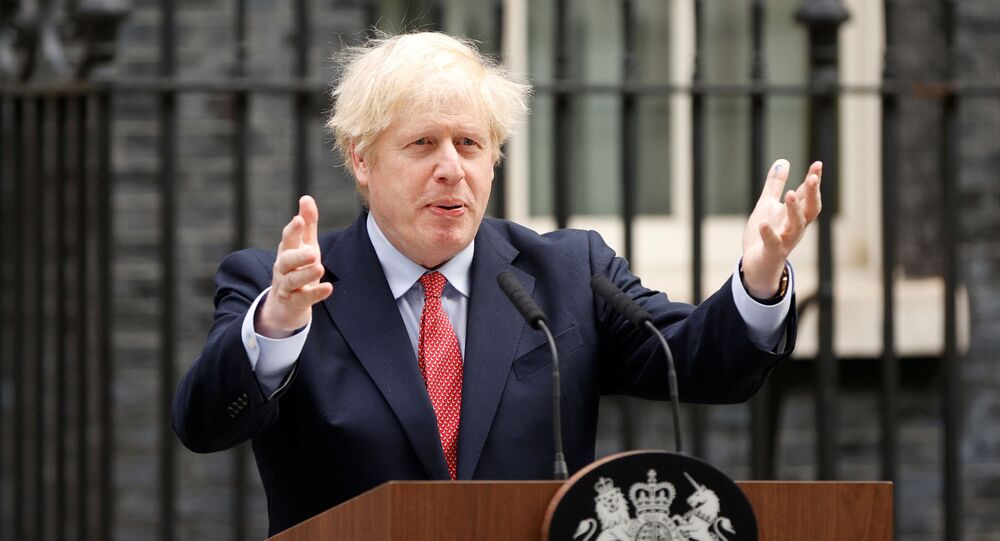 Britain's head of government has addressed citizens declaring the first stage of the quarantine easing, thanking the public for their patience during this unprecedented crisis, which, he says, they will definitely sort out with human lives being a top priority.

In an emphatic address published on the government portal and the Mail on Sunday, Prime Minister Boris Johnson has lauded a new stage in the nation's battle with the "insidious" coronavirus - a phased easing of the hitherto across-the-board lockdown, citing a downward trend in the spread of the infection.

While heartily thanking the tremendous efforts by everyone that contributed to the common health and well-being of the nation at this tumultuous time - from frontline medical workers to teachers and government civil servants, Johnson noted that of the five tests earlier set for the country to eventually lift quarantine measures, Britain has fulfilled three, with "progress being made on the remaining two".

To prevent a dangerous resurgence of the epidemic, Johnson announced the setting up a well-balanced system of COVID-19 alert levels, which he said will be overseen by a new Joint Biosecurity Centre - the body specially designed "to assess the spread of the virus and inform decisions over how we lift the lockdown".

In line with a series of new adjustments, Brits will be allowed to spend as much time outdoors as they wish or need, since, as the prime minister noted, the past few months have shown the risk of contracting the novel virus in the open air is much less than indoors, while fresh air and out-of-doors sports are invaluable for the immune system. He stressed, however, that social distancing and staying on increased alert are crucially important whatever easing of measures takes place.

"We are trying to do something that has never had to be done before - moving the country out of a full lockdown, in a way which is safe and does not risk sacrificing all of your hard work", the prime minister asserted in an apparent reference to the strict stay-at-home measures that citizens have been "patiently" complying with.

The latter, he said, is something that he personally couldn't appreciate more, citing the overwhelmingly social nature of human beings, commonly drawn to their families and friends, many of whom have found themselves separated by the measures.

He went on to address the preliminary roadmap, expressing hope that in June the country would move to step two, "opening schools to more children and reopening some shops". "And no earlier than July, we can move to step three, opening parts of the leisure and hospitality sectors", the PM noted, adding the measures would help the nation to get closer to "a kind of normality" provided the moves are fullly compatible with the said five tests.

"And if at any stage we need to tighten the restrictions, we will not hesitate to act. Nothing is more important than saving lives", the prime minister noted, further summing up on the country's headway:

"We have achieved a lot together so far. Let's not throw it all away now. In return for the small freedoms we are now allowing ourselves, we must stay alert", he urged promising the nation that there is certainly a route out of this given "100 percent accurate" corona antibody tests now in use and Britain "leading the work" on vaccines and COVID-19 treatment.

Johnson's written address to the nation follows the release of a roadmap by the government on Monday, which outlines three stages of gradually lifting the COVID-19 lockdown, enforced in late March.

Britain is leading the coronavirus tally in Europe, with the country having registered 241,461 COVID cases to date, including 34,546 deaths, per Johns Hopkins University statistics.

The number of coronavirus-related deaths in the country rose by 468 from the previous reporting period, the Health Department said Saturday.