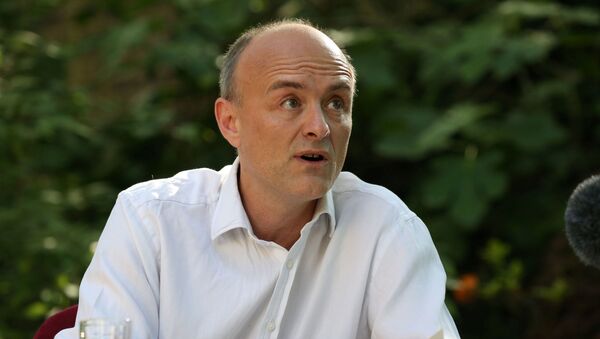 © REUTERS / POOL
Subscribe
International
India
Africa
Boris Johnson's aide Cummings has landed in hot water after he travelled to Durham in March to self-isolate with his family in defiance of lockdown rules. He reportedly made another trip in April.

Dominic Cummings has defended his March trip to the northeastern city of Durham in England during the lockdown, saying that London could provide no reasonable childcare options in case his wife and he had fallen seriously ill.

The adviser said that he thought driving to his father's farm was the best thing to do at the time.

"I don't regret what I did… I think what I did was reasonable in the circumstances", the aide said.

‘Hypocrite Aide’ Row: What We Know About Dominic Cummings’ Alleged Breach of Lockdown Rules
Delivering a speech in the Number 10 Rose Garden, Cummings said that he was not considering leaving his post, despite the outrage his actions caused. According to the official, the public anger was sparked by media reports "that have not been true".

Speaking right after the address, UK Prime Minister Boris Johnson said he did not believe that Cummings had done anything to undermine the public health messaging amid the COVID-19 prevention measures in the country.

"Yes of course I do regret the confusion and the anger and the pain that people feel ... That's why I wanted people to understand exactly what had happened," the prime minister said to reporters.

Cummings met public backlash after The Guardian reported that he, his wife, and their child drove to the northeastern city of Durham in late March to stay with his parents after his wife began manifesting COVID-19 symptoms.

On Sunday, UK newspapers reported that the adviser subsequently made a second trip to Durham at a later date.

While his actions were condemned by the Labour Party’s leader and a number of other UK public figures, Prime Minister Johnson stood by his aide's action, saying that he had acted responsibly.