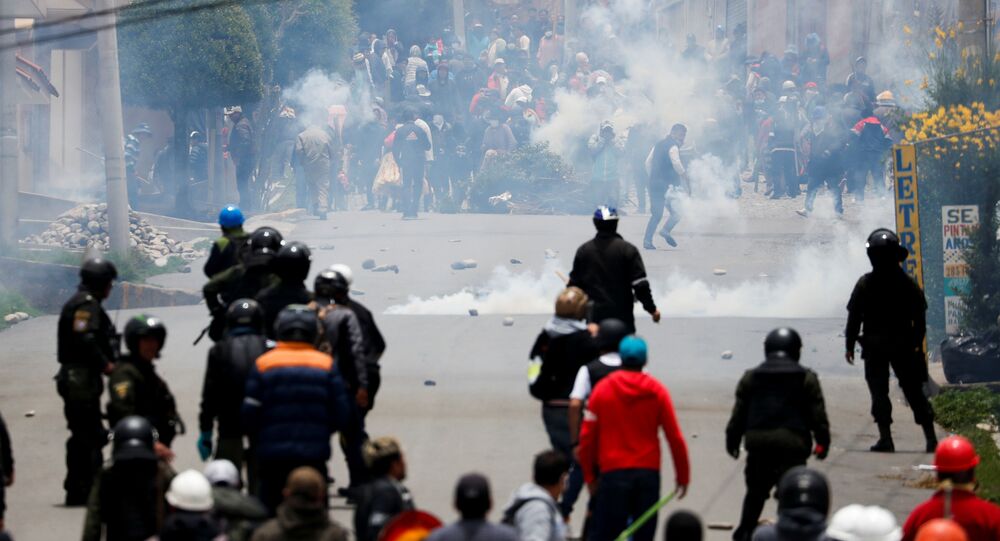 US Hand in Bolivia Coup

Only days before Evo Morales stepped down as Bolivia’s president audio tapes were published implicating opposition politicians, the US embassy and American senators in a coup plot.

Among those US senators mentioned in the leaked tapes by the Bolivian politicians seeking Morales’ ouster were Marco Rubio and Ted Cruz, according to a report by Telesur.

It is believed that the US embassy in La Paz helped coordinate a deliberate campaign of street violence and media disinformation in order to destabilize the Andean country and force Morales to quit.

The whole scenario fits Washington’s standard-operating procedure for instigating coups or regime change against governments it disapproves of. Bolivia’s socialist president Evo Morales was in Washington’s cross-hairs for toppling.

What has happened in Bolivia is similar to the US-backed violent protests which earlier this year rocked the socialist government of President Nicolas Maduro in Venezuela. Fortunately for Maduro, the Venezuelan military has remained loyal to the constitution and was not turned by Washington’s pressure.

Unfortunately for Morales, however, sufficient pressure was exerted on the Bolivian military and police. When those institutions called for Morales to step down on Sunday, he did so in order to spare his nation from further deadly conflict. “The coup mongers are destroying the rule of law,” said Morales, who was re-elected for a fourth term on October 20.

Several countries have denounced what they see as a coup against the democratically elected leader. Russia, Cuba, Mexico, Venezuela and Argentina have all condemned the subversion of Bolivia’s constitution.

When Morales won the election last month, the Organisation of American States (OAS) alleged “manipulation” of the voting system. Such claims by the OAS were predictable because it has long served as a pro-Washington agency which is vehemently opposed to left-wing governments in Latin America. Critics call it a relic of the Cold War.

The organization has spearheaded international criticism of the Venezuelan government and served to whip up public disturbances earlier this year in that country which challenged the elected president, Nicolas Maduro. The orchestrated coup in Venezuela has since subsided over recent months.

Washington supplies the OAS with 60 per cent of its financial budget. It is, therefore, a tool for promoting US geopolitical interests across Latin America, as amply noted by the Grayzone.

Its meddling in Bolivia seems to have succeeded, unlike its failed attempts in Venezuela.

The allegations of voting fraud in Bolivia gave immediate fuel for street protests by rightwing groups loyal to opposition politicians. Those opposition factions are linked to the past oligarchic regimes which ran Bolivia before Morales came to power in 2006. Morales was the first indigenous president in a country which has traditionally been dominated by a ruling class associated with Spanish colonialists. His policies gained much international praise for lifting millions of Bolivians out of poverty, especially the indigenous people who had historically been marginalized by the ruling elite.

For the past three weeks, since the election result designated Morales as the clear winner, Bolivia has been convulsed by extreme violence. Protesters attacked members of Morales’ party, burning homes and offices and intimidating journalists from broadcasting the scenes of anarchy on the streets. It is reported that one of Morales’ family relatives was kidnapped at the weekend.

Given the reign of terror threatening to destroy the country, the president was compelled to relinquish power at the weekend.

The implication of US senators colluding with Bolivia’s rightwing opposition to create a climate of hate and fear is straight out of the same playbook for subversion that Washington has used most recently in Venezuela and in dozens of other countries around the world. The coup d’état that occurred in Ukraine in February 2014 leading to a takeover by neo-Nazi parties is just one other example.

The irony is that Washington and its European partners are consumed with accusations made against Russia for allegedly interfering in their political systems. US and European media relentlessly claim with scant evidence that Moscow is running “influence campaigns” to distort elections.

Just this week the New York Times has published yet another report in a recent series of reports alleging that Russia is cranking up interference and meddling in African states.

Meanwhile, the evidence is glaring that the US has just moved blatantly to destroy the democratic process in Bolivia, to terrorize a nation and blackmail its president to resign. Yet Western media dutifully turn off that narrative to keep chasing their fantasies about Russia. Another illustration of why corporate Western media are more accurately defined as propaganda channels, not news outlets.