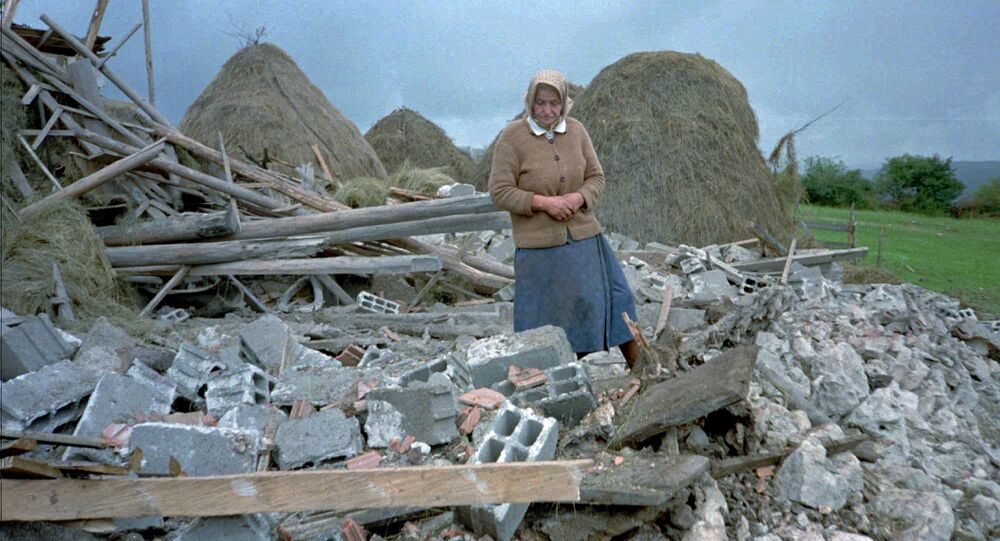 We’re coming up shortly to the 20th anniversary of the start of the NATO bombing of Yugoslavia. It began on 24th March 1999 and lasted for 78 days. There was no break, not even for Orthodox Easter.

The war, fought ostensibly to protect the ethnic Albanian citizens of the province of Kosovo from ethnic cleansing, did not, it's fair to say, attract the same level of opposition as other US-led military actions. In the British House of Commons 13 MPs (including Jeremy Corbyn, George Galloway and John McDonnell), tried to force a vote but failed.

Among left-wing supporters who you'd normally expected to be against US-led military actions was one Ken Livingstone.

There was a fear from well-intentioned people that something terrible might be about to happen in Kosovo, similar to the events in Srebrenica in 1995, where approximately 8,000 men and boys were killed in a massacre carried out by Bosnian Serb forces (later held to be a genocide by the ICJ), and during ‘Operation Storm' that same year when around 200,000 Serbs fled, or were driven out of their homes in the Krajina area, by Croat forces.

Nevertheless, like the invasion of Iraq which followed it four years later the attack on Yugoslavia was wrong.

There's much evidence to show that it helped create the very humanitarian crisis it was supposed to prevent, as thousands fled from the bombing. ‘Operation Allied Force' as it was called, cost the lives of around 500 Yugoslav civilians.

At least fifteen were killed when NATO strikes hit the passenger train they were travelling on at Grdelica Gorge. Sixteen died on an attack on RTS, Serbian television. Over sixty Kosovan Albanians were killed when a US fighter pilot bombed their convoy. NATO at first tried to blame the attack on Yugoslav forces.

If the NATO ‘humanitarians' had seriously been concerned with reducing tensions between Belgrade and Pristina and protecting civilians from possible harm, they could have brokered a genuine peace process. But they were clearly looking to escalate. Consider what happened at Chateau de Rambouillet.

An annex was added to the document, allowing for NATO's military occupation of Yugoslavia, which the US and UK knew Slobodan Milosevic, the Yugoslav leader, could not possibly accept.

Just over a year later, Lord Gilbert, a UK Minister for Defence Procurement, admitted: "I think certain people were spoiling for a fight in NATO at that time. I think the terms put to Milosevic at Rambouillet were absolutely intolerable: how could he possibly accept them? It was quite deliberate."

Henry Kissinger, who can hardly be described as a ‘peacenik', agreed. He wrote:

"The Rambouillet text, which called on Serbia to admit NATO troops throughout Yugoslavia, was a provocation, an excuse to start bombing."

© REUTERS / Mark Blinch
Yugoslavia a 'Warning' for Canada's Multicultural Mosaic - Journo
That the war on Yugoslavia was about economics, and not humanitarianism, can also be seen by looking at other parts of the Rambouillet Accord. As I in noted in the Guardian in 2005, Article I (1) of Chapter Four called for a "free-market economy", and article II (1) for privatisation of all government-owned assets.
Why was this included if the aim was simply to protect civilians?

For an answer we only need to turn to George Kenney, a former Yugoslavia desk officer of the US State Department. "In post-cold war Europe no place remained for a large, independent-minded socialist state that resisted globalisation," Kenney stated, by way of explaining his country's hostile actions.

Under Milosevic, the F.R. Yugoslavia operated an economic system under which old communist-era models of social ownership still predominated. Large swathes of the economy were either state-owned or worker-controlled. And all this, don't forget, ten years after communism was supposed to have ended in Europe.

While he was portrayed in NATO propaganda as ‘the New Hitler', Milosevic was actually a socialist who believed in the old Yugoslav ideal of ‘Brotherhood and Unity'. He was demonised not because he was a hardcore Serb nationalist, but because he wasn't. He came from the partisan tradition in Balkan politics, not the chetnik one.

At the time of the NATO bombing I was based in Hungary and myself and a friend, who was also from Britain, organised a street protest opposite from the British Embassy in Budapest. Interestingly, the first person who signed our petition calling for the bombing to be stopped was a lady from Croatia who told us of the kindness Croats like her had received in Milosevic's Yugoslavia. The British Ambassador very kindly invited us in to the Embassy for tea and biscuits and a chat and tried to ‘sell' to us the case for war, producing a photocopy of a speech by Tony Blair. But we were not taken in by the words of the British Prime Minister. In April I returned home to Britain for Easter, and attended with my mother, an anti-war march in London. At the head of the demonstration was the veteran Labour MP Tony Benn. I asked if he could sign my copy of his book ‘Arguments for Socialism'. He did so and then I told him where I had bought the book. In a state-owned bookshop in the centre of the city (Belgrade) that NATO were now bombing.

It was also while I was in Britain that I watched an excellent television documentary against the war, made by the award-winning playwright Harold Pinter.

"The NATO action in Serbia is in breach of its own charter, outside the recognised parameters of international law, and entirely without reference to the United Nations‘ Pinter declared. He also told an anti-war demonstration: "Let us face the truth. The. truth is that neither Clinton nor Blair gives a damn about the Kosovar Albanians. This action has been yet another blatant and brutal assertion of US power using Nato as its missile. It set out to consolidate one thing — American domination of Europe. This must be fully recognised and it must be resisted."

© AP Photo / Alex Brandon
Trump Accused Baltic Leaders of Starting Wars in Yugoslavia – Reports
No doubt some thought Pinter's words hyperbolic in 1999. But consider what came next. The bombing of Yugoslavia was not a ‘one-off' but merely the first stage in a war against independently-minded, strategically important countries that defied the imperial writ of the hawks in Washington.

The invasion of Afghanistan followed in 2001- to topple a government that only came to power because of previous US attempts to topple leftist governments there.

The illegal and utterly catastrophic assault on Iraq was launched two years after that, on the fraudulent grounds that the country possessed WMDs which could be assembled and launched within 45 minutes. The NATO bombardment of Libya came in 2011, transforming a country with the Highest Human Development in Africa into a jihadists' playground. In Syria, ‘rebels' were backed in order to try and topple a secular government which posed no threat to the west.

Today, its Venezuela and Iran which are in the line of fire and of course there's the ongoing baiting of Russia and the ratcheting up of Cold War 2.0 tensions.

How many more people would have opposed the bombing of Yugoslavia in 1999 had they known what was to come?