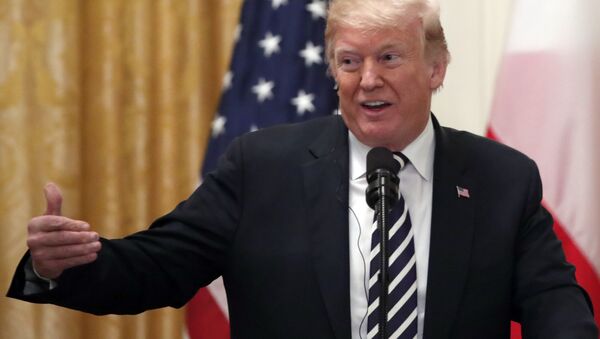 © AP Photo / Alex Brandon
Subscribe
US President Donald Trump reportedly made the mistake during a White House meeting with his counterparts from Lithuania, Latvia and Estonia in April.

According to the newspaper, during a meeting with Lithuania’s President Dalia Grybauskaitė, Latvia’s Raimonds Vējonis and Kersti Kaljuaid of Estonia, Trump went on to accuse the perplexed leaders of starting the 1990s wars that resulted in the collapse of Yugoslavia.

It took them some time to realise that he had confused the Balkans and the Baltics.

In today’s ⁦@lemondefr⁩: When #Trump received the leaders of #Estonia, #Latvia and #Lithuania, he began by blaming them for the war in Yugoslavia. It took them a few moments to realise he’d mixed up the Balkans and the Baltics. ⁦@SylvieKauffmann⁩ pic.twitter.com/HYQYpbqgGs

White House Mocked for Saying Scotland is Not Part of UK in Now-Deleted Tweet
Le Monde suggested that Trump remained “apparently uneducated in the matter by his wife, Melania, originally from the former Yugoslavia.”

According to Le Monde, he also bemoaned Nord Stream 2, which envisages the construction of two gas pipelines that will bypass the nations entirely, running from Russia through the Baltic Sea to Germany. The Baltic states are not part of the project.

The epic gaffe has sent social media into meltdown, with netizens coming up with other hilarious blunders he could have possibly made:

He’s particularly pissed off at Germany for bombing Pearl Harbor.

Now waiting for him to make a comment about Crocodile Dundee to the Austrian delegation.

He probably yells at her anytime something happens in the Czech republic.

It is not the first time that Trump has experienced troubles with geography: during a speech at the United Nations in September 2017 he heaped praise on the health care of a non-existent African country – Nambia.

“In Guinea and Nigeria, you fought a horrifying Ebola outbreak. Nambia’s health system is increasingly self-sufficient,” he told African leaders.

The White House later clarified that POTUS was talking about Namibia, not Zambia or The Gambia.

000000
Popular comments
NATO is based in northern Europe (Baltics)....Yugoslavia was a NATO opp.......the only real confusion is who exactly is NATO and who do they represent.........

gnosis
12 November 2018, 23:23 GMT2
000000
And you expect something else from a society that has problem figuring out by their own words the difference Austria and Australia