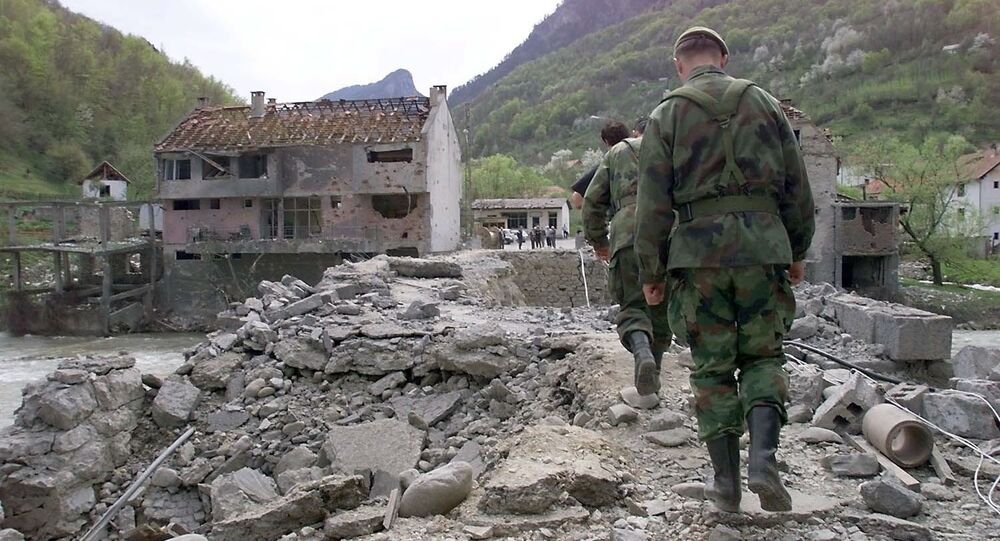 According to the official version, the 1999 Peace Conference in Rambouillet was the last chance for a peaceful resolution to the escalating Kosovo crisis. However, eyewitnesses to the events and Serbian experts argue that Western sponsors of Kosovo's independence project never intended to use this opportunity. They had completely different plans.

Twenty years ago, on 6 February 1999, negotiations on the settlement of the Kosovo conflict began in Chateau de Rambouillet, near Paris, under the auspices of the international community, during which the Federal Republic of Yugoslavia (FRY) and Kosovo Albanians were to find a peaceful solution to the crisis.

Negotiations lasted 17 days and shortly after — on 24 March 1999, the "humanitarian intervention" of Yugoslavia by NATO began, more commonly known as the bombing of Yugoslavia.

Foreign relations expert and former Serbian diplomat, Zoran Milivojevic, has told Sputnik what was wrong with the Rambouillet talks and that the Serbs had sincerely hoped to come to an agreement preventing a NATO intervention.

"It is well known that the negotiations in Rambouillet were organised under the pressure from Western powers that were already planning for some kind of an independence project for Kosovo, namely, a forcible secession of Kosovo from Serbia", Milivojevic explained.

© Sputnik / Iliya Pitalev
Problem of Kosovo Will Not Be Solved Soon – Serbian President Vucic
According to the expert, this pressure on Serbia in 1999 came within the framework of a large-scale geostrategic project, which we are witnessing to this day and the elements of which are not only the indisputable recognition of Kosovo's independence but also the expansion of NATO in the region.

It's not only Serbian experts who have criticised the Rambouillet negotiations and suspect that the United States was planning a military campaign in Yugoslavia from the start. Former US Secretary of State and Nobel laureate, Henry Kissinger, has said that these talks were not aimed at reaching a deal that would suit all sides:

"The Rambouillet text, which called on Serbia to admit NATO troops throughout Yugoslavia, was a provocation, an excuse to start bombing".

Milivojevic noted that the objectives of the conference held in the outskirts of Paris were perceived by the parties quite differently. If the goal of Serbia was to reach an agreement that would allow it to settle the Albanian issue, the US was interested in a completely different outcome:

"They had geostrategic goals, which meant gaining control in the region and ensuring the possibility of their own military presence in certain areas of the Balkans. Today it is absolutely clear".

The former diplomat also emphasised that given the manner in which the negotiations were conducted, how the Western representatives openly played the role of patron to the Albanian side and what exactly Yugoslavia was offered, it was obvious that Belgrade could not agree to this.

Milivojevic, among other things, noted that it was in Rambouillet that the political promotion of the current president of the self-proclaimed republic began.

The conference and the proposed text were an ultimatum, according to the Serbian expert, as Belgrade had to give up its own sovereignty and territorial integrity as well as allow the country to be divided. The Serbian expert said that the conference in Rambouillet was a precursor to an act of aggression against the FRY and violent secession of Kosovo.

© Sputnik / A. Solomonov
Bulgaria Returns 190,000 Undismantled Yugoslavian Landmines to Greece
In political scientist Predrag Simic's book, "The Way to Rambouillet" (Put u Rambuje), you can find a concrete explanation of what kind of agreement terms were categorically unacceptable for Yugoslavia: holding an independence referendum in Kosovo and accepting NATO's presence and a NATO-led implementation force. While the role of the UN and the Security Council, in particular, was reduced to supporting an international mission that NATO would form independently.

The current Prime Minister of Kosovo, Ramush Haradinaj, has been calling for a new international conference on Kosovo and has even referred to it as "Rambouillet 2". But Milivojevic believes that such a format would only serve to confirm Kosovo's statehood.

"The only goal Haradinaj is pursuing, his political platform and his government is the recognition of Kosovo's independence from Serbia, and nothing else", the former Serbian diplomat explained.

The former head of Kosovo's negotiating team, Edita Tahiri, who took part in practically all the talks with Belgrade, has criticised Prime Minister Haradinaj's proposal. She believes that there's no need for another international conference and it would be enough to get the United States to join the existing Brussels format.

"She is in favour of maintaining some sort of dialogue, but the ultimate goal of this dialogue is still a full recognition [of Kosovo's independence] because the American stance on this issue hasn't changed".

Milivojevic has concluded that Pristina's view on any type of format of further dialogue still implies that Belgrade must recognise Kosovo's independence. Tahiri with a little more benevolence is just saying the same thing that Haradinaj more directly and aggressively keeps saying.