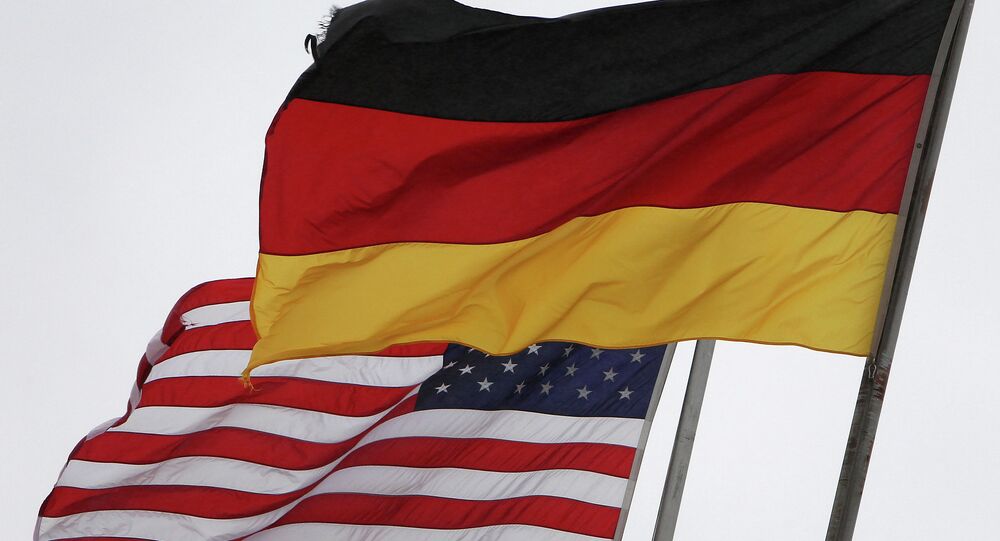 Washington and Berlin on a Collision Course

The Russia sanctions bill that passed the US Senate by 98:2 on June 15 is a bombshell; it directly demonizes the Nord Stream 2 pipeline, under the Baltic Sea, which is bound to double Gazprom’s energy capacity to supply gas to Europe.

The 9.5 billion euro pipeline is being financed by five companies; Germany's Uniper and Wintershall; Austria's OMV; France’s Engie; and Anglo-Dutch Shell. All these majors operate in Russia, and have, or will establish, pipeline contracts with Gazprom.

© REUTERS / Nord Stream 2
Nord Stream 2 Depends on 'Political Bargaining' Between US, EU
In a joint statement, German Foreign Minister Sigmar Gabriel and Austrian Chancellor Christian Kern stressed that, “Europe’s energy supply is a matter for Europe, not the United States of America”; “instruments for political sanctions should not be tied to economic interests”; and the whole thing heralds a “new and very negative quality in European-American relations”.

An oil trader in the Gulf bluntly told me, “the new sanctions against Russia basically amount to telling the EU to buy expensive US gas instead of cheap Russian gas. So the Germans and the Austrians basically told the Americans to buzz off.”

A top US intel source, Middle East-based and a dissident to the Beltway consensus, stresses how, “the United States Senate by a nearly unanimous vote have decided to declare war on Russia (sanctions are war) and Germany has threatened retaliation against the United States if it initiates sanctions.

© AP Photo / Martin Meissner
The Final Straw: Germany Mulling Over Sanctions… This Time Against the US
Germany accused the United States of trying to stop the Nord Stream 2 pipeline of Russia to the EU so that the US can export their liquid natural gas to the EU, making the EU dependent on the United States.”

But then, there’s a possible game-changing aftermath; “That would spell the end of NATO if a trade war between the EU and the United States takes place.”

The usual Brexiteer suspects obviously are falling like a ton of bricks over the “Molotov-Ribbentrop 2 pipeline” – another trademark expression of paranoia by Poland.

They are even demonizing Germany for daring to do business with Russia, “undermining the security and economic interests of Eastern and Central Europe” and – yes, roars of laughter are in order — undermining “American emotional backing for NATO.”

So much pent-up “emotion” even leads to a nasty accusation of betrayal; “We know which side Poland is on. Which side is Germany on?”

What’s really unforgivable though is that Nord Stream 2, in practice, buries for good failed state Ukraine's $2 billion in revenue from pipeline fees.

Nord Stream 2 is opposed by all the usual suspects; Poland; the Baltic states; Washington; but also the Nordic states. The top official argument is that it “harms EU energy security”. That in itself embeds a massive joke, as the EU has been harming itself in interminable “energy security” discussions in Brussels for over a decade.

Analyst Peter G. Spengler qualifies the US Senate bill as a “declared, but not yet executed act of warfare, an act of (sanctions) war against Germany and Austria directly, possible recipients within the EU indirectly.”

© Sputnik / Igor Zarembo
'Poor Quality of Russian Gas': Poland Overreacts Amid Nord Stream 2 Construction
Spengler draws attention to the reminder of the FRG/USSR Agreement on Economic Cooperation of 1978 with a 25 years duration 1978 Agreement of Economic Cooperation between the then Federal Republic of Germany and the USSR, designed to last for 25 years; “This agreement together with all the foregoing treaties between West Germany and the Soviet Union were the basis on which [Helmut] Kohl could build his 'Haus Europa' with the Soviet Union/Russia from the summer of 1989 in Bonn onwards.”

Crucially, this agreement also included a gas transportation triangle between Moscow, Teheran and Bonn, and was “fiercely but completely clandestinely embattled by the Carter administration, among so many silent wars against the Federal Republic of Germany  in those years.”

And guess who was trying to sabotage the agreement 24/7; recently deceased Polish “Grand Chessboarder” Zbigniew Brzezinski.

So nothing much changed since the late 1970s; Washington demonizing both Tehran and Moscow. The section of the US Senate bill related to Russia is some sort of after thought to yet another hardcore package against Iran, the Countering Iran's Destabilizing Activities Act (which includes the Russia sanctions.)

© Sputnik / Grigoriy Sisoev
Washington's Anti-Russia Sanctions: US Ploy to Dominate Europe's Energy Market?
It’s not an accident that the US Senate sanctions bill targets energy; this is a sub-product of a fierce energy war. But what is the US Senate really up to? Call it creative (lucrative) destruction.

The US Senate is convinced that Nord Stream 2 “would compete with US exports of liquefied natural gas to Europe”. Thus the US government “should prioritize the export of United States energy resources in order to create American jobs, help United States allies and partners, and strengthen United States foreign policy”.

Yet this has absolutely nothing to do with helping “allies and partners”; it’s rather a case of US energy majors getting a little help from their friends/puppets in the Senate. It’s in the public domain how US energy majors donated over $50 million in 2015/2016 to get these people elected.

Compared to the US Senate, the role of the European Commission (EC) in the saga remained somewhat murky, until it became clear it will interfere via a “mandate”. This “mandate” will have to be approved by a “reinforced qualified majority” vote by member states, a higher than usual threshold of 72 percent of EU states representing 65 per cent of the population.

Spengler observes how, “the commission's continued attempts to get a legal foot in the contracts between European companies and Gazprom would be much more detrimental and potentially efficient than even a President's signing of the Senate (and House) sanctions law.”

So where will this all lead? Arguably towards an extremely messy clash “between the European Commission/Court of Justice and German/Austrian (plus Russian) jurisdiction.”

The Senate bill will have to be backed by a veto-proof majority in the House; that vote won’t happen before the G-20 in Hamburg. Then it would become law – assuming President Trump won’t squash it.

The key, “nuclear” issue is a non-mandatory clause for the US Treasury to sanction those five Western firms involved in Nord Stream 2. If the law is approved, the White House better ignore it. Otherwise Germany, Austria and France will definitely interpret it as a declaration of war.

Trump and Chancellor Angela Merkel will definitely be on a collision course at the G-20, with Merkel emphasizing discussions on climate change, refugees and no trade protectionism, much to Trump’s disgust. The Russia sanctions bill just adds to the unholy mess. Expect a lot of fireworks “celebrating” those bilaterals in Hamburg.

Nord Stream 2 Depends on 'Political Bargaining' Between US, EU