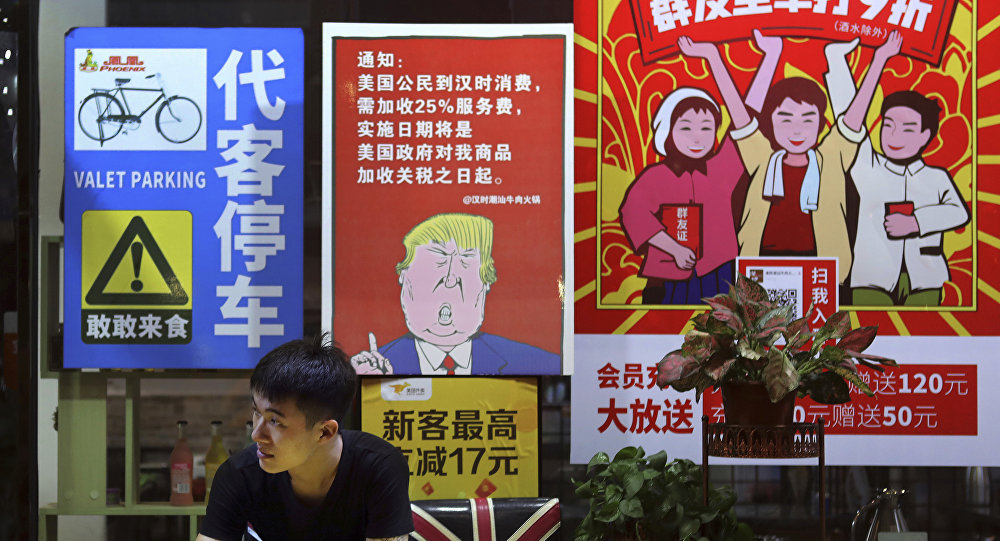 After unproductive talks late last week in Washington, the two sides agreed to persist in their negotiation efforts on Chinese soil, with new talks slated to take place in Beijing in the near future.

The United States has issued a target list of additional Chinese goods worth $300 billion that would be subject to increased tariffs in a potential further escalation of the US-China trade row that has cast a cloud over global economic growth in general.

The US trade representative noted that the list, which includes China-manufactured laptops, industrial equipment, and farm goods, is aimed at making good on President Donald Trump’s threat to extend punitive 25 percent duties to all Chinese goods delivered to the United States. The USTR pointed out that the list excludes pharmaceuticals and rare earths.

The move closely follows Beijing’s announced decision to slap increased tariffs on $60 billion worth of American imports, mostly agricultural produce, in response to higher US taxation (which went up by 10% to 25%) imposed on Chinese exports last week in a new twist in the ongoing trade war, which is feared to be shaking international financial markets.

Following China's announcement, there has been a plunge in US stocks, with the Dow Jones Industrial Index falling by more than 600 points on Monday, which has been largely seen as one of its largest drops since early January. Meanwhile, on 14 May, the People's Bank of China set a new exchange rate, opting to devalue the yuan's exchange rate to the US dollar by 0.6 percent, from 6.7954 yuan to 6.8365 yuan per US dollar.

Officials from Washington and Beijing are expected to resume trade talks this week in Beijing, after the previous round of negotiations bore no fruit when the two parties met in Washington last Friday.

Shortly afterwards, POTUS Trump tweeted that  Beijing should strike a deal with him now, or it could be "far worse" for China if the agreement is re-negotiated during his second presidential term, or, as Trumps said, China “may as well wait” for the 2020 US elections and hope for a Democrat to win. “The only problem is that they know I am going to win (best economy & employment numbers in U.S. history, & much more)”, the president tweeted, adding that it would be “wise for them to act now”.

Washington and Beijing have been joining efforts to resolve issues that emerged in the wake of Trump’s decision last June to impose 25 percent tariffs on $50 billion worth of Chinese goods in a bid to fix the US trade deficit with China. There have been several rounds of reciprocal import duties.