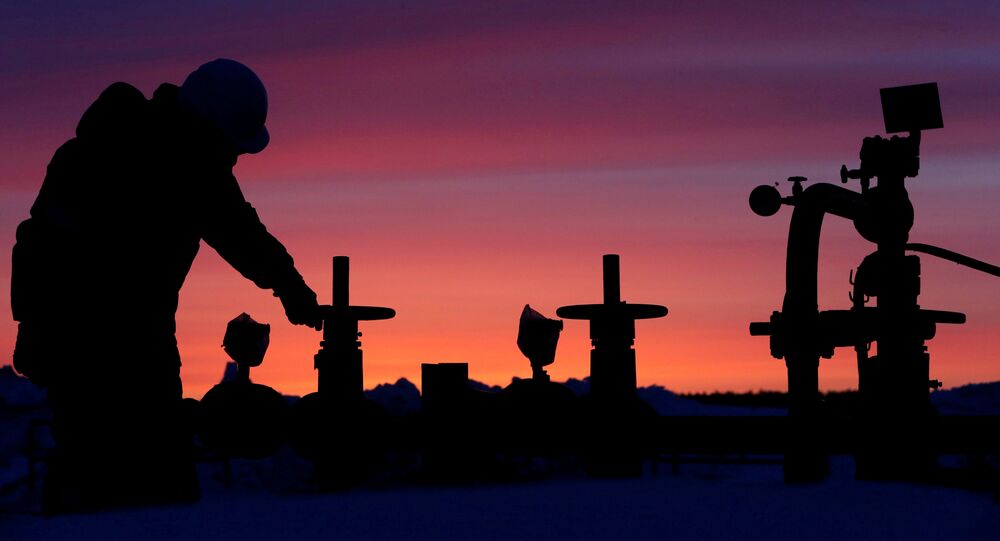 Why $100 per Barrel Oil Prices Aren't Good for Anybody, Including Russia

Trump National Security Advisor John Bolton has said that US energy sanctions against Iran will benefit both the US and Russia, since both are oil exporters which will be able to take advantage of the drop in Iranian exports. Speaking to Sputnik, energy market experts explained why Russia's interest is in long-term stability, not short-term profit.

Oil futures are continuing to climb, with Brent crude up to $79.98/b and WTI rising to $69.26/b in Monday trading, and market analysts talking more and more about $100/b oil being a "distinct possibility."

Over the weekend, OPEC and non-cartel producers announced their readiness to boost oil output to compensate for any possible shortfall expected amid looming US energy sanctions against Iran, with Saudi Energy Minister Khalid al-Falih saying Riyadh has a remaining spare capacity of 1.5 million pbd.

However, Saudi capacity, and that of other major producers, including Russia, may not be enough to make up for the shortfall caused by the expected drop in Iran's sales abroad.

As the third-largest oil producer in OPEC, and the fifth-largest in the world, Iran had an average daily output of 3.87 million barrels in 2017, accounting for over 4 percent of total global production. With Iranian exports expected to drop by up to 1.5 million bpd thanks to the impending US restrictions, which also target any foreign entities doing business with Tehran, market experts warn of serious shocks to the global market.

© AP Photo / Evan Vucci
Bolton: US, Russia Will Benefit From Sanctions on Iran
How serious these shocks will be is up for debate, with Beijing continuing its oil trade with the Islamic Republic, and India, another major buyer, also defending its energy partnership with Tehran.

However, other countries, including Japan and South Korea, have caved to US pressure, as have many European countries fearing the sting of US secondary sanctions. These fears have in turn led to speculation that sanctions will lead to shortfalls, for which other major suppliers won't be able to compensate.

Speaking to Russian media on Monday, the Saudi energy minister warned that Riyadh cannot guarantee a balanced oil market to prevent oil prices from climbing above $100/b. "Saudi Arabia now in October produces oil at the level of 10.7 million bpd. I can say that we can go up, if necessary, to 12 million bpd. But if 3 million bpd disappears, we cannot cover this volume," he said.

© AFP 2021 / ATTA KENARE
Scores of EU Firms Ready to Work With Iran Despite US Sanctions - Tehran
Russia is also producing at near-record levels; Russian oil production is expected to hover between 11.4 and 11.6 million bpd until the end of 2018, leading to questions about whether a further rise is possible.

On Monday, Iranian Oil Minister Bijan Zanganeh warned that neither Russia nor Saudi Arabia have the capacity to make up for the loss in supply from Iran. "As I have repeatedly said, there is no replacement for Iranian oil in the market. Saudi Arabia and Russia's output is near their highest level ever and they have no spare capacity to pump more to replace Iran's oil," he said.

Speaking to Sputnik, Alexei Mastepanov, deputy director of the Russian Academy of Sciences' Institute of Oil and Gas Issues, said that nothing good can come of US geopolitical manipulations involving Iranian oil.

"Washington's aggressive and unpredictable policy and attempts to grab everything at once, disregarding their partners and even their own long-term interests, leads to such peak fluctuations, but they are objectively not beneficial to anyone, including Russia," Mastepanov explained.

© AFP 2021 / GALI TIBBON
Israeli Justice Minister Shaked: Oil Sanctions Will 'Hurt Iran A Lot'
On the one hand, the analyst noted, high prices may seem like a good thing for Russia's budget, with all oil and gas profits above $40.8/b going straight to the national reserves. But there is a downside which Russia is well-aware of, the analyst noted.

"Peak prices destabilize the market, and getting big money for the budget for a period of one or two months will be accompanied by losses in the six months that follow," Mastepanov said.

For Russia and other traditional exporters, it's not the peaks, but the level at which prices can consolidate over the long term, that matter. $100/b oil is not justified by current market conditions, and is the result of Washington's efforts to disrupt the balance in the oil market, the analyst stressed.

"The more expensive oil gets, the stronger the desire to replace it with something else. This could be shale oil, gas, to some extent, electric vehicles, to some extent. The higher the price of oil, the more relevant substitutes become. As a result, demand will decrease, and this will eventually lead to lower prices," Khestanov said.

Unfortunately, Mastepanov noted, "objectively speaking, there is very little Russia can do to influence the destabilizing processes which are unfolding at the moment. But it is important to understand them and prepare for them."

China's Decision to Axe US LNG, Oil Not as Easy as It Seems – CCTV Editor