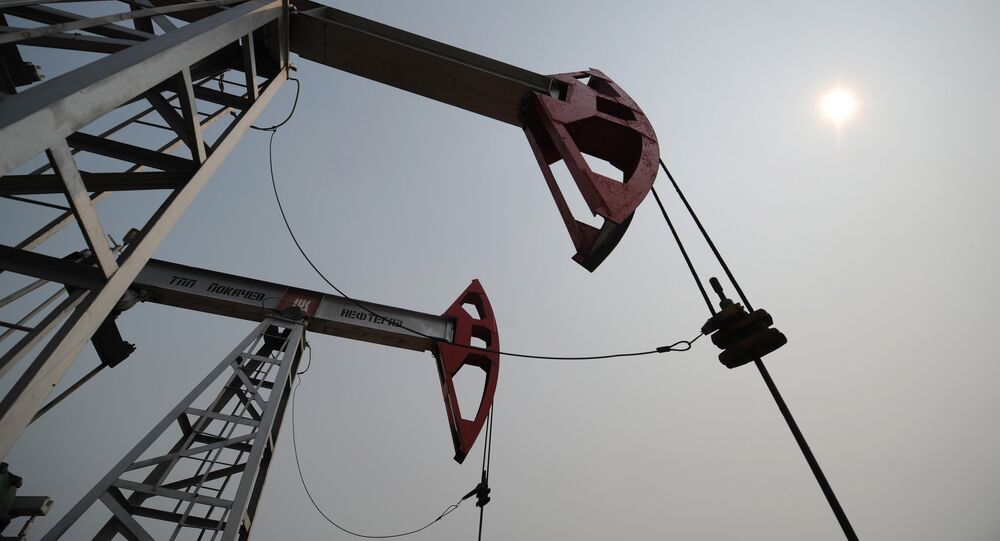 Trump's sanctions against Iran come into force in a month, but as Iranian oil exports continue to fall, the price of oil continues to grow. Dr. Hafez Abdo, associate professor in accounting at Nottingham Business School, told Sputnik that we may see prices go up over $100, despite countries like China and India vowing to keep buying Iran's oil.

Sputnik: How justified are concerns of the shortfall in global energy supply amid anti-Iranian sanctions?

Dr. Hafez Abdo: The world has every reason to be concerned about the future shortages of supply of oil and gas because of what's going on between the United States and Iran. This is not new, because the sanctions were lifted from Iran a few years ago, then they added more oil and gas into the market, oil prices came down, now we are facing the same situation.

Sputnik: So you think we're going to see $100, three-digit oil prices, within weeks?

Dr. Hafez Abdo: Yes, when America will apply more sanctions on Iran, Iranian oil supply will be cut and there will be pressure on OPEC and non-OPEC suppliers to enhance supply. However, there is a limit to how much they can add to the market, especially for Saudi Arabia, the maximum they can add is one million barrels a day, while the cut in Iranian oil supply is expected to be 2.5 million barrels a day.

© AFP 2021 / YOUSSEF KARWASHAN
Kurds Share Oil With Syrian Gov't as Part of a 'Working Deal' - Source
There will be a shortfall in oil supply and this will, obviously, enhance oil prices to go beyond $100. Given that the Syrian conflict is not over yet, Iraq is not settled, Libya is politically not settled, so there is nothing in the global market that suggests that supply will be increased in the future to compensate for the shortfall in Iranian supply. So the only thing that anyone can expect is that the oil price is going to increase and I personally expect the oil price to go above $100.

Sputnik: Trump has asked OPEC to boost production. What is the extent that we can realistically expect to see an increase in production by OPEC?

If they sell oil at a higher price, they'll make more profit. I'm not sure why OPEC members would listen to Mr. Trump, I'm not seeing much supply in the market based on Trump's instructions and orders. As I said, he's just dreaming now and I'm not sure how realistic are his dreams in terms of increasing, enhancing oil supply. I'm not very optimistic about Mr. Trump‘s wishes.

Sputnik: Yet we have the signatories of the JCPOA; we have Turkey, we have other countries that have said that they will continue to purchase Iranian oil and gas and a lot of European countries have said that would create a system in order to bypass US sanctions. Is there any way that all of these measures could actually decrease the impact of the additional sanctions on Iranian crude exports?

Dr. Hafez Abdo: If it happens, it will. The international oil supply will not be cut severely if we talk about Turkey, for example, if they're going to satisfy part of their oil and gas demand from Iran, that is going to put less pressure on the international oil and gas market. But to what extent can a country like Turkey just disobey American sanctions and try to face them, because we've seen how much Turkey suffered recently from some financial instability and the Turkish know that if they object Trump, they may have some sanctions on them.

© AP Photo / David N. Goodman
Trump's Plan to Boost Ethanol in Gasoline Under US Oil Industry Criticism
But for sure, if Iran manages to sell anything of its oil and gas, that will lessen the pressure on the international oil demand. Also, to add countries like Turkey and the European countries will have a great interest to buy Iranian oil and gas, because, for sure, it will be cheaper than the international oil and gas prices. So they will get it cheap and why not? But the question is, can they face Trump's angriness and sanctions? I'm not sure what the answer to this question is.

The views and opinions expressed in the article are those of Dr. Hafez Abdo and do not necessarily reflect those of Sputnik.