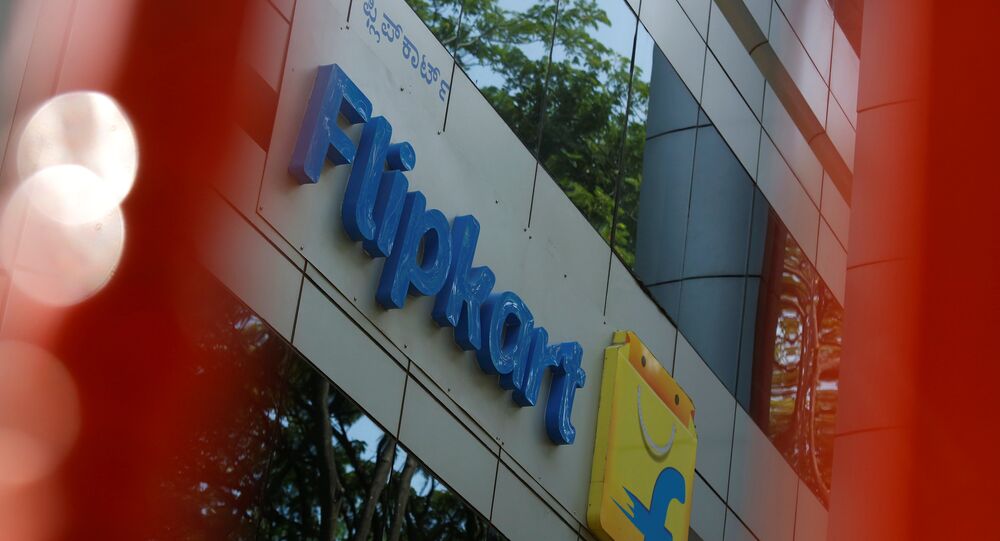 The influential Swadeshi Jagaran Manch has asked PM Narendra Modi to intervene and stop the proposed acquisition of Indian e-retail giant Flipkart by American firm Walmart, arguing that such a deal would go against India’s foreign investment rules and would strangle local e-commerce companies.

Swadeshi Jagaran Manch (SJM), a sister organization of the ruling Bharatiya Janta Party, has argued that the proposed acquisition of Flipkart by the American firm goes against the country's foreign investment rules. SJM is the strongest voice outside the Narendra Modi-led government which is known to consistently impact key economic decisions of the state.

"The deal is in violation of Indian laws, as the foreign direct investment in e-commerce is not allowed. Besides flouting the country's rule, this deal will kill competition in the sector and flush small retailers," Ashwani Mahajan, the national co-convener of SJM, told Sputnik.

© AFP 2020 / NOAH SEELAM
India's Flipkart Beats Amazon in High Value Sales Over Diwali
SJM's reaction comes amid reports claiming that the board of Flipkart Online Services Pvt Ltd had approved a proposal to sell about 75 percent of the company to a Walmart Inc.-led group for approximately $15 billion.

Walmart has long been eyeing expansion in the world's fastest growing e-commerce market, but has not been able to get through as India does not allow full foreign ownership in multi-brand B2C retail. Earlier, Walmart's joint venture with India's Bharti Group was shuttered after an internal anti-corruption probe.

This time, Walmart has worked out a strategy to circumvent India's foreign investment rules by making an arrangement with Google's parent company Alphabet Inc wherein the duo will enter into a deal with Japan's SoftBank Group Corp., which will sell its entire stake in Flipkart through a private equity fund at a valuation of roughly $20 billion.